The Easter field meeting of the British Bryological Society, held from 29 March to 2 April, used Southampton as a base from which to explore various parts of the New Forest. The twenty-four members who met on this occasion were particularly pleased to have the company of Mr H. Williams, a Canadian bryologist from Ontario who was over here for a short time studying our hepatic flora, but who has since returned to his own country. Throughout the weekend the weather remained fine though cold: while the rest of Britain was basking in the sun, people on the south coast had to be well wrapped against bitter north-east winds.

Within a comparatively small area the New Forest provides three distinct types of habitat, each with its characteristic vegetation. Flat-topped gravel plateaux, nowhere rising above 400 ft. O.D., are covered with a poor heath flora including a few scattered Scots pines. On the gentle slopes of the valleys, woods occupy well-drained soil derived from the underlying clays and loams where these are exposed. The valley bottoms are often waterlogged, supporting bog or fen. Each of these vegetation types was visited, and, in addition, a day was spent on the South Wiltshire chalk.

The Rufus Stone commemorating the death, while hunting in the forest, of William Rufus (1087-1100) is still surrounded by woodland. Mature beech (Fagus sylvatica), oak (Quercus robur) and scattered holly (Ilex aquifolium) form a canopy so thick that few flowering plants grow beneath its shade. As a result, mosses such as Mnium hornum, Polytrichum formosum and species of Dicranum and Rhytidiadelphus are able to thrive; Leucobryum glaucum was found here with fruit. With an average annual rainfall of between 30 and 40 in. a luxuriant epiphytic flora is not expected: nevertheless, Frullania fragilifolia and Lejeunea planiuscula var. azorica were found amongst other more usual species, and Zygodon forsteri, one of the rarest of British mosses, discovered here by Dr Michael Proctor in 1954, was seen several feet up on a sloping beech trunk as well as on roots at ground level. Associated with Molinia and Erica tetralix in a small flushed patch were, among others, species of Sphagnum, Aulacomnium palustre, Riccardia pinguis, Saccogyna viticulosa and Bazzania trilobata. Neither of the two last-named is common in the south-eastern half of the country.

Whitley Wood near Lyndhurst has more of a heath-type flora, with birch, rowan and Scots pine beside oak, beech and holly. Dicranum montanum was growing well on some of the trees and Leucobryum glaucum was observed as an epiphyte.

The magnificent beeches near Highland Water were searched intensively and successfully for fruiting Pterogonium gracile and in the same locality Scleropodium illecebrum turned up unexpectedly on a bank beside the road.

Representatives of heath country were examined at St Catherine’s Hill, and Burton and Hamptworth Commons. Except for a few scattered pines these are treeless and even the dwarf shrubs are kept low by regular burning. Calluna vulgaris and Erica cinerea are the most prominent constituents, with Molinia caerulea and Erica tetralix in the damper parts. The most interesting bryophytes found in this habitat were Dicranum spurium, Campylopus brevipilus and in one place, C. introflexus, a rare southern species, growing in quantity and fruiting.

Fragments of bog vegetation which may be found amongst the heath communities in small pools and sloping flushes are similar in composition to the more extensive valley bogs such as Duckhole Bog near Rhinefield and Hamptworth Common. Erica tetralix and Molinia caerulea are abundant, with Eriophorum angustifolium and Narthecium ossifragum common in the wetter parts. In Duckhole Bog eleven species of Sphagnum make an almost continuous carpet in which the higher plants grow, and each occupies a particular niche: S. compactum, S. tenellum and S. molle are found on the drier margins of the bog, S. rubellum forms small cushions in the bog itself, S. magellanicum and S. plumulosum are found in the wetter parts and S. cuspidatum submerged in pools. Splachnum ampullaceum (sterile), Funaria obtusa and Odontoschisma denudatum were among the other bryophytes seen.

Examples of fen vegetation were seen at Marlborough Deeps and near Holmsley. Disused clay pits at Marlborough Deeps have filled with water making numerous small pools, and at the margin of one of them was a distinct zonation showing the tolerance of each species to waterlogging: 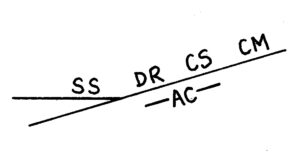 Chalk down and woodland at Dean Hill, South Wiltshire

In typical chalk grassland Pseudoscleropodium purum and Camptothecium lutescens were found with fruit, and some of us saw Entodon orthocarpus for the first time. Thuidium hystricosum and several of the small species such as Barbula hornschuchiana, Weissia sterilis and Aloina ambigua were noteworthy.

Dense yew woods clothe the northern slope of the hill. In the deep shade of the trees there is little growth of any kind, but in small clearings the scree is carpeted with species such as Rhytidiadelphus triquetrus and Ctenidium molluscum. Seligeria paucifolia was fruiting abundantly on chalk fragments, and Zygodon conoideus, one of our rarer Zygodon species with its characteristic gemmae, was collected from a fallen branch of yew.

All the five excursions were extremely well organized by Mrs Jean Paton and Dr Michael Proctor, who had obviously been to a great deal of trouble to ensure smooth running of all the arrangements. The Society’s thanks are gratefully accorded to them, and also to Prof. Williams and staff of the Department of Botany, University of Southampton, who welcomed us at an informal reception held in the Department on the evening of Thursday, 29 March, and who allowed us to use the lecture theatre for the Annual General Meeting on Saturday, 31 March.

New Vice-county records made at the meeting