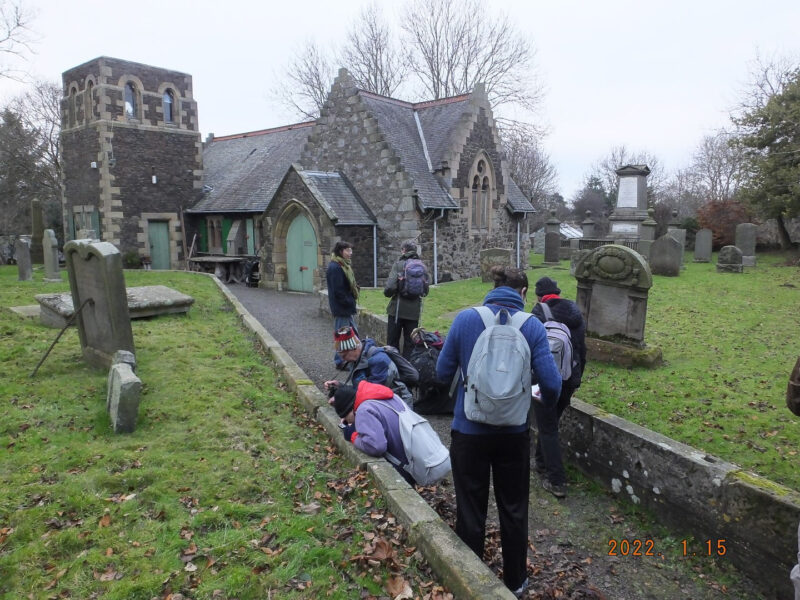 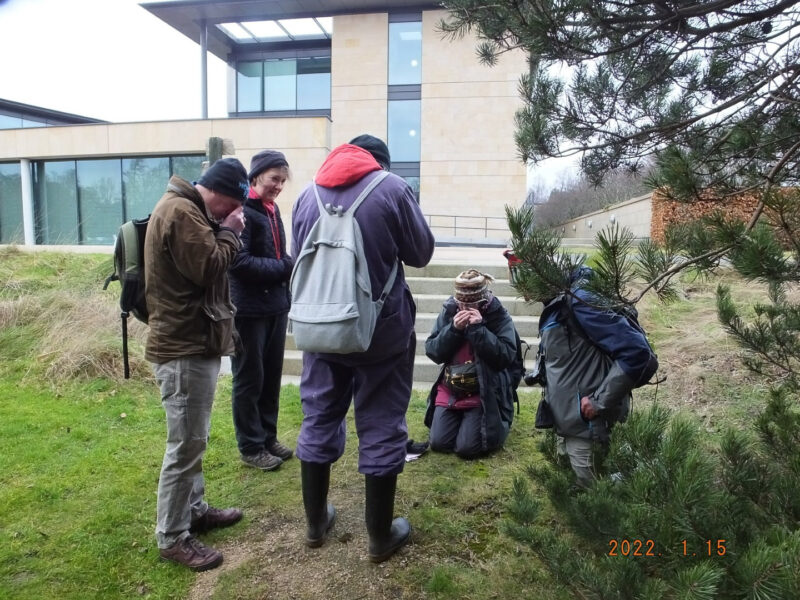 Nine, including four BBS members, assembled at Gogar tram stop on a relatively mild January morning to learn about, and record, the bryophytes in Gogar churchyard and the grounds of RBS Gogarburn on the western edge of Edinburgh. Most of the outing was in monad NT1672 but a loop of the Gogar Burn took us into NT1671. The bryophyte diversity was probably limited by a lack of humidity, air pollution from the main road and nearby airport, and agricultural run-off into the burn.

As someone commented, the passing tram drivers must have wondered what was going on since we spent the first 45 minutes within a few yards of the tram stop. Once we moved into the tiny churchyard, we began to find a wider range of species. Many of the gravestones are much older than the church itself, and one flat slab produced the only Racomitrium fasiculare and Grimmia trichophylla of the day.

There had been no rain for a week, and we frequently used a water spray to revive dry mosses, particularly Syntrichia of which we found 4 species. S latifolia was on pavement outside the churchyard and later seen thriving on concrete over the burn alongside S montana; S papillosa was growing with Orthotrichum species on an old tree; and S ruralis ssp ruraliformis, in its dry state resembling a Racomitrium, was found on a boulder and by the roadside.

The route through the extensive grounds of RBS, which are on the site of the old Gogarburn Hospital, took in some mature woodland and the meandering Gogar Burn. Our expert, BBS President Liz Kungu, not only found most of the unusual species but was able to recognise potentially rich sites that the rest of us would have overlooked. Liz found Cinclodotus fontinaloides and Hygroamblystegium tenax in the burn and Rhynchostegiella tenella and Bryum radiculosum on an old wall. We also compared Kindbergia praelonga with Oxyrrhinchium hians, two similar species that I confuse, and found both fruiting and gemmiferous Bryum dichotomum. A lawn of Lophocolea semiteres was growing with Campylopus introflexus under pines; it was interesting to see the two New Zealand invasive species growing intertwined. Lophocolea semiteres has a musty scent at least as strong as that of L bicuspidata, and these together with Frullania dilatata were the only leafy liverworts seen on the day.

As well as recording around 54 species of bryophytes we watched jays, a tree creeper, and a goldcrest, and one of our group found overwintering ladybirds on Scots pine. Eventually bad light stopped play, so most of us boarded trams to take us into Edinburgh or to the nearby park and ride.

Meet at Gogarburn tram stop, grid reference NT16869 72458 at 10:30 on Saturday 15 January 2022 for a field trip to RBS Gogarburn, probably finishing by 15:00. The grounds include old woodlands, recent plantations, a marsh, the Gogar burn, and damp grassland.
Please wear suitable clothing and footwear and bring a packed lunch and hand lens. Please do not attend if unwell, particularly if you have COVID symptoms.
There is no parking at RBS Gogarburn but the Ingliston Park and Ride is one tram stop away from Gogarburn tram stop.
Please email davidadamson32@gmail.com by 13 January 2022 if you wish to attend.