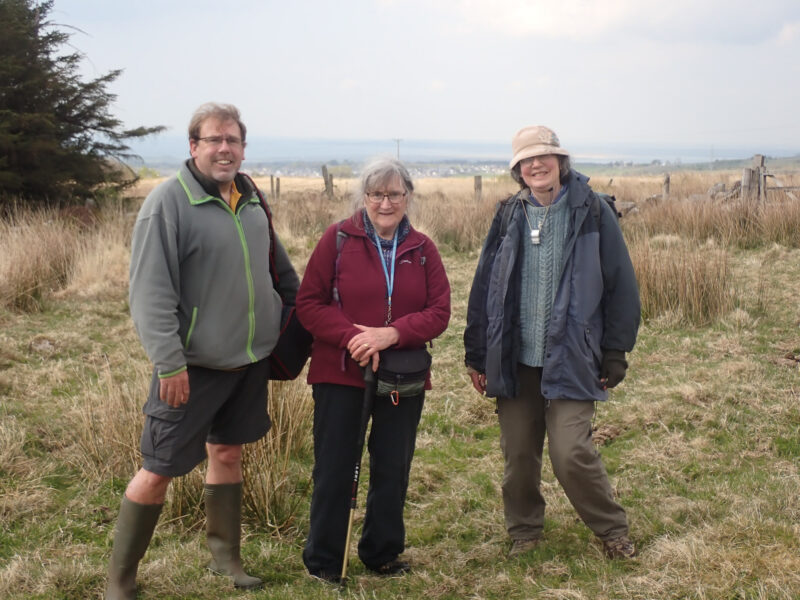 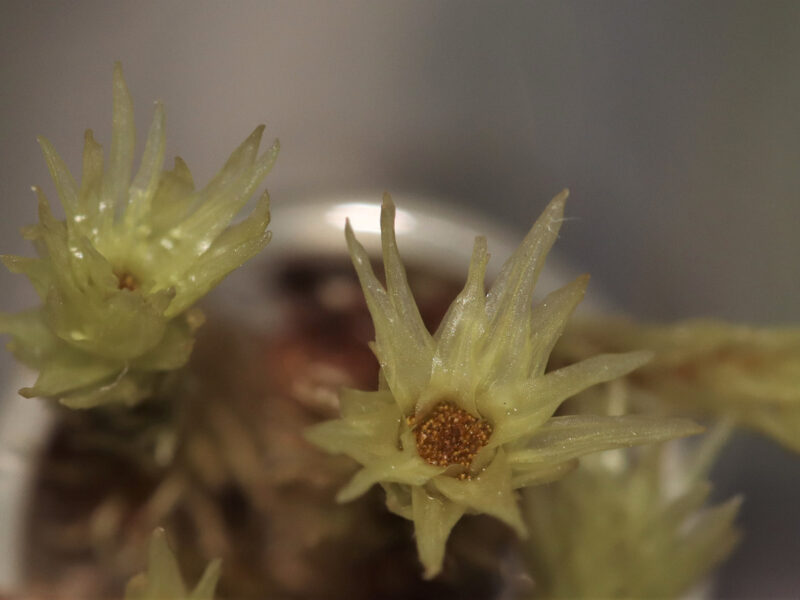 A select group of four of us met outside Richard Vandersteen’s house up at Nebo on the edge of the Nantlle valley slate quarrying district to investigate Nant Noddfa. This is an area of rough pasture and marsh close to Richard’s house that is supporting a population of Marsh fritillary butterflies. The area does not enjoy any statutory protection but it was thought that it might be an interesting site to survey for bryophytes.

After a slow start on the footpath with the obligatory head scratching session over a patch of Ceratodon purpureus we spread out across the marsh. Sue promptly found a Warnstorfia exannulata candidate. Meanwhile Richard found an interesting boulder in the middle of the field. One half was quartz. The other had an area of about half a square metre, obviously more mineral rich, with twelve different species counted including a small cushion of Grimmia. One half of the Grimmia cushion had old upright capsules and the other half had younger capsules with a curved seta indicating G.pulvinata. We wondered if we had two different species of Grimmia but it appears that Grimmia pulvinata holds its capsules upright when old just to confuse the unwary. Further into the marsh some male shoots of Aulocomnium palustre were duly admired. The highlight of the day was finding some Marsh fritillary caterpillars feeding on Devils bit scabious (Succisa pratensis). There was an opportunity to do some Sphagnum revision with nine different Sphagna identified. A specimen of yellowish Sphagnum subsecundum was collected from the open grassland, and some robust dark green Sphagnum flexuosum was found in a ditch amongst the conifers indicating a certain amount of basicity on the marsh. We spent a pleasant day in the sunshine with thirty three species identified in the field and another seven investigated under the microscope. An onerous finish to the outing was produced by a tour around Richard’s beautiful garden, a mug of tea sitting in the sunshine with a spectacular view of the mountains looking up towards Cwm Silyn at the back of the Nantlle ridge!

Various habitats including mires, a plantation and unimproved grassland/rush pasture.  Some urban habitats too.  The site is mostly flat but very boggy so wellington boots are recommended!

Meet at Gorlan Gron – (SH476504). This is Richard’s house and there is parking for 4 cars on his drive.  Nearest postcode: LL54 6EG.  First house on the right after the Nebo sign. There is further parking for 3 cars outside the school at SH479504.

From here we will walk to the monads to be recorded.