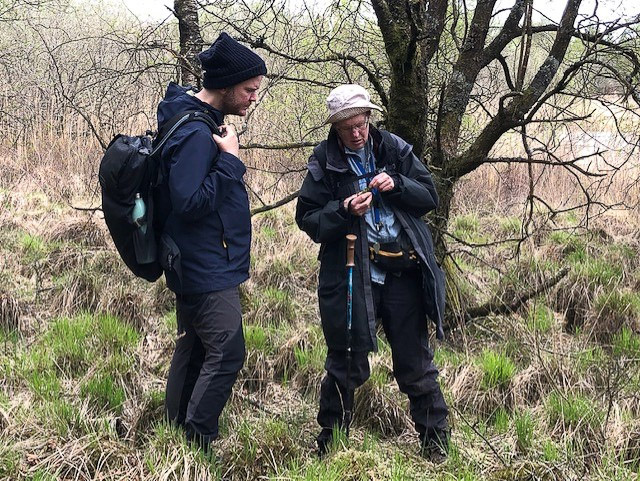 Liz and Martin near the margin of the NE loch, with reed beds and willow scrub.

On a lovely spring day a small select group met to record this SWT reserve between Corsock and Balmaclellan. The reserve is a small, 24.5 ha, lowland site, 160 m a.s.l., with two lochs set among reed swamp, willow scrub, acid birch woodland, heathland, remnant bog and Myrica/Molina, with some small areas of conifer plantation. There are some previous records for the site, but these appear to be mostly quadrat lists and so did not reflect the diversity of the whole site, and in total listed only 31 species, two of which were only identified to genus. As this is a small site we could take our time recording and focus on identification skills.

Most of the day was spent in NX7078, which includes both lochs and the majority of the reserve. The expected range of epiphytes included a lot of Ulota, most of which was unfortunately not in good enough condition and only U. bruchii could be identified. Although superficially the site appears predominately acidic, approaching the north edge of the NE loch there was considerable Campylium protensum near the willow scrub, with Calliergon cordifolium among the fringing reeds, and Climacium dendroides at the edge of a damp area. As there has been a dry spring in SW Scotland most areas of the reserve were accessible and there were extensive populations of Sanionia uncinata in the lochside woodland. Although we never saw the otters, we were pleased to see many signs of their presence, both footprints and spraints, at many places in the reserve. The birch woodland had the usual range of species, and Microlejunea ulicina was found on the birches closer to the loch shore. There was surprisingly little Scapania gracilis, though we eventually found it close to the SW loch. This loch has a rocky shoreline in places, with Fontinalis antipyretica and Isothecium holtii on boulders in the loch, and Hedwigia stellata on boulders on the shore and more Climacium along the shore. Heading back to the southern end of the NE loch, Bob found Hookeria lucens on the bank of a small pond by the boardwalk. We hunted diligently for Pallavicinia among the Molinia, but without success, though this species does have one site further west in Wigtownshire, VC74. 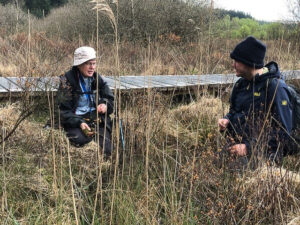 Discussion by the board walk, Liz and Martin near the Plagiothecium latebricola site.

However, scrabbling about around the bases of the Molinia hummocks near the Hookeria site produced a small, scrappy, unknown pleurocarp, and subsequent microscopic examination revealed this to be Plagiothecium latebricola, the star find of the day. This is only known from two other Scottish vice counties and both of these records are pre-1970; there is a more recent Cairngorm record on the NBN, but this appears not to be substantiated by a specimen.

A rock outcrop by the path had more Scapania gracilis and Orthocaulis floerki. Much of this area of the reserve is underlain by peat, but the vegetation is dominated by Myrica and Molinia and only a limited range of Sphagnum species could be found.

Most of the eastern end of the reserve has a covering of peat, and in NX7178 the best remnants of bog were found. Here were the greatest diversity of Sphagnum, with S. rubellum, S. tenellum, S. cuspidatum, S. medium (previously known as S. magellanicum), S. fallax and S. papillosum, as well as Mylia taylorii  and Leucobryum glacum. This area is starting to be invaded by conifer seedlings, and will require some management in the near future to maintain the water table and remove the seedlings whilst they are still small. The reserve now has a total of 92 bryophyte species recorded.