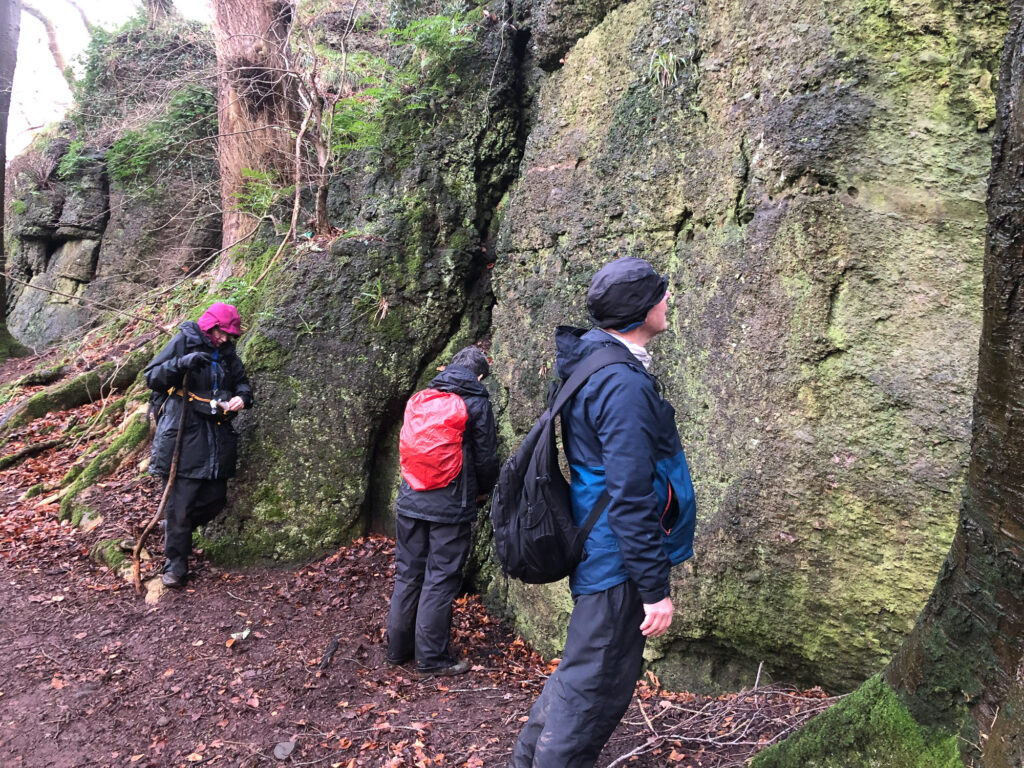 On a very dreich December day five members of the group gathered at the north side of The Crichton in Dumfries to walk across to Maidenbower Craigs for the last meeting of the year. This is a well known bryological site, just outside Dumfries, with a number of species recorded here that have no, or few other localities in a Vice-County with relatively few extensive rock outcrops, and limited areas of base rich rock. The most infamous record from the site is an old record of Paraleucobryum longifolium, which has not been seen since and now believed to be erroneous. We started, in overcast drizzle with light so poor that the first piece of field equipment used was our torches, to record the numerous epiphytes on the large Acers beside the path to the Craigs and then diverted to The Bungalow, the site of the footings of a building long since demolished. Amongst abundant fertile Barbula unguiculata, Chris was very pleased to find Aloina aloides, a de-bracketing for VC72 and only known from one other Dumfriesshire locality in Glenkiln Burn, and not recorded there since 1953.

We walked through the woods to the base of the Craigs and were pleased to quickly find abundant Anomodon viticulosus, which is only known from three other VC 72 localities. The rain eased up slightly as we worked our way along the base of the Craigs, and we managed to have lunch in the dry break, but it was extremely disappointing to see the widespread rubbish deposited along the Craigs. We found several populations of Marchesinia mackaii, first recorded here in 1961 by Derick Ratcliffe, and this is its only known Dumfriesshire site. Further along the Craigs a small population of Conardia compacta was found growing near Rhyncostegiella tenella. Conardia is a relatively uncommon, and usually coastal plant in Scotland, and Maidenbower Craigs is its only station in south-west Scotland. It has only been recorded here once before in 1961, when it was recorded by Warburg, and was our second VC de-bracketing record of the day. This shows that even recording a relatively well-known site can still provide interesting records. Other good finds for the day included Porella platyphylla just below the Craigs, and Dichodontium flavescens on the fine-grained sandstone of the craigs.

We made our way back through a stubble field behind the woods to the south of the Craigs, where we found abundantly fertile Empherum serratum, plus Riccia sorocarpa and a small populations of the arable field Bryums including B. violaceum and B. subapiculatum. Pseudocrossidium revolutum on the sandstone walls of the gateway back onto the road completed the days recording with a total of 83 species found.