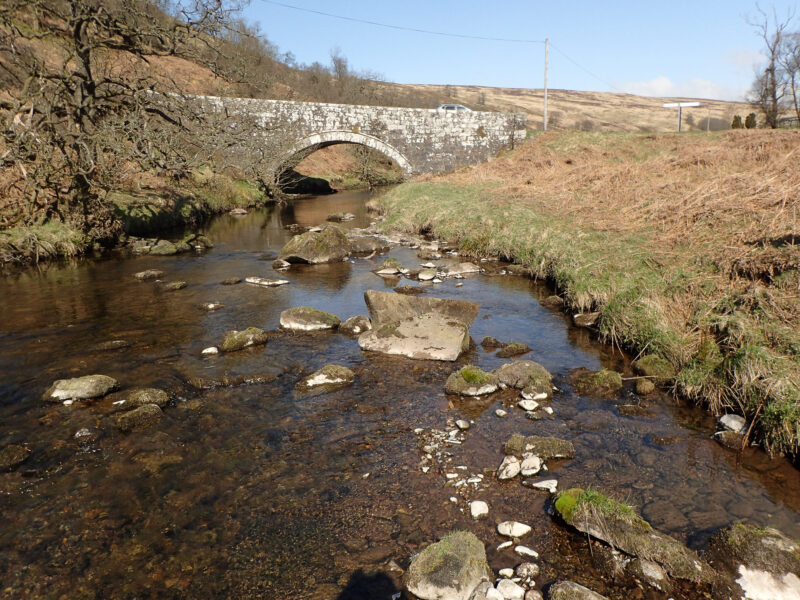 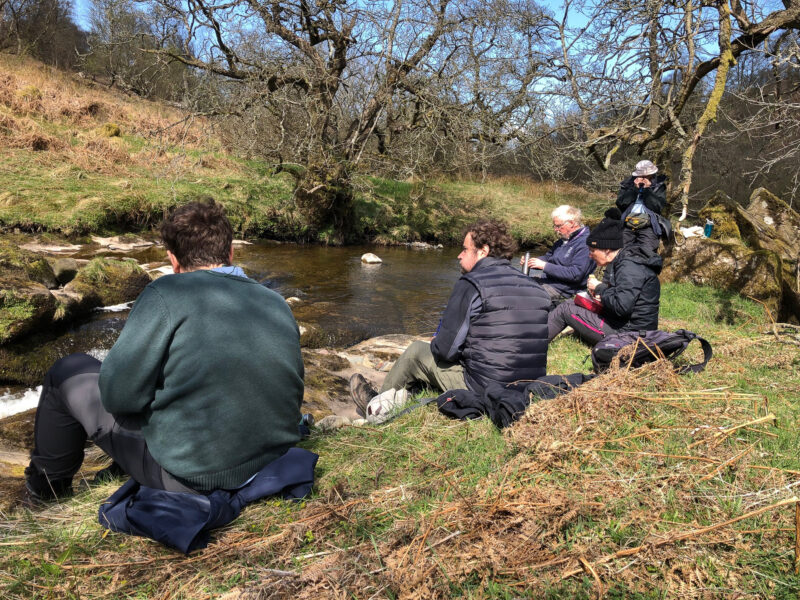 On a glorious April morning we returned to the Tarras Valley Reserve, Langholm, to help them with their Bioblitz by recording the bryophytes, plus any other organisms we happened to see. We met at the car park just north of Tarras Lodge, and walked back down the road to start recording the reserve in NY 4097 on the bridge. This yielded a few species not seen elsewhere during the day, including Encalypta streptocarpa, Gymnostomum aeruginosum and Pseudocrossidium revolutum, and David Long found Hygrohypnum luridum beneath the bridge and Marchantia quadrata on one of the smaller islands in the river.

The main target for the day was along the east bank of the Tarras Water in NY4086, with the usual range of species on the boulders in the river. The water was fairly low, so we were able to access the islands and the riverine species recorded included Cinclidotis fontinaloides, Hygroamblystegium fluviatile and Hyocomium armoricum. Although the species list was dominated by calcifuge species, there were occasional small flushes draining into the river with Palustriella commutata and Plagiomnium elatum. The river bank provided us with a very pleasant lunch spot and added Frullania tamarisci and Racomitrium aquaticum to the list.

There is a small Pine plantation about half way through the monad, with a few magnificent ancient pines in the south of the plantation. It was in this area that the two star finds of the day were recorded. David found Ulota calvescens, with the well-developed capsules having a long seta and with a very sparsely hairy calyptra, growing on Sorbus near the riverside edge of the plantation. This is only the second record for Dumfriesshire, and records are sparse throughout the rest of the Dumfries and Galloway Region. Calypogeia azurea was found growing on the banks of a small ditch draining from the plantation to the river. The striking blue colour was so obvious that it was apparent from a distance, without the need for a hand lens, and was confirmed microscopically later. This is another scarce species in the region, with a couple of old Dumfriesshire records from the Ae Forest area, and a more recent one from the Moffat Hills (Great Hill, Corehead). Otherwise, there is only one other old record from Kirkudbrightshire. Well-rotted logs provided another suite of species, including Tritomaria exsectiformis. There is a significant population of feral goats in the area, and we saw several families with kids during the day, and also the damage that they had done to the trees. Although the monad did not appear spectacularly rich, recording was constant and by the end of the day we had recorded 106 species in this monad alone.

We continued south along the Tarras Water into the final monad NY4085. Here we recorded along the Tarras Water till we reached Perter Burn and then recorded upstream to the edge of the monad. Many of the same species as in the previous monad were found, but also a few additional species including Orthotrichum rivulare and Lejeunea cavifolia. Altogether it was a very interesting day’s recording for the Tarras Valley Reserve Bioblitz with 132 bryophyte species recorded, a good total for VC 72, and indicative of the value of the reserve for bryophyte conservation.