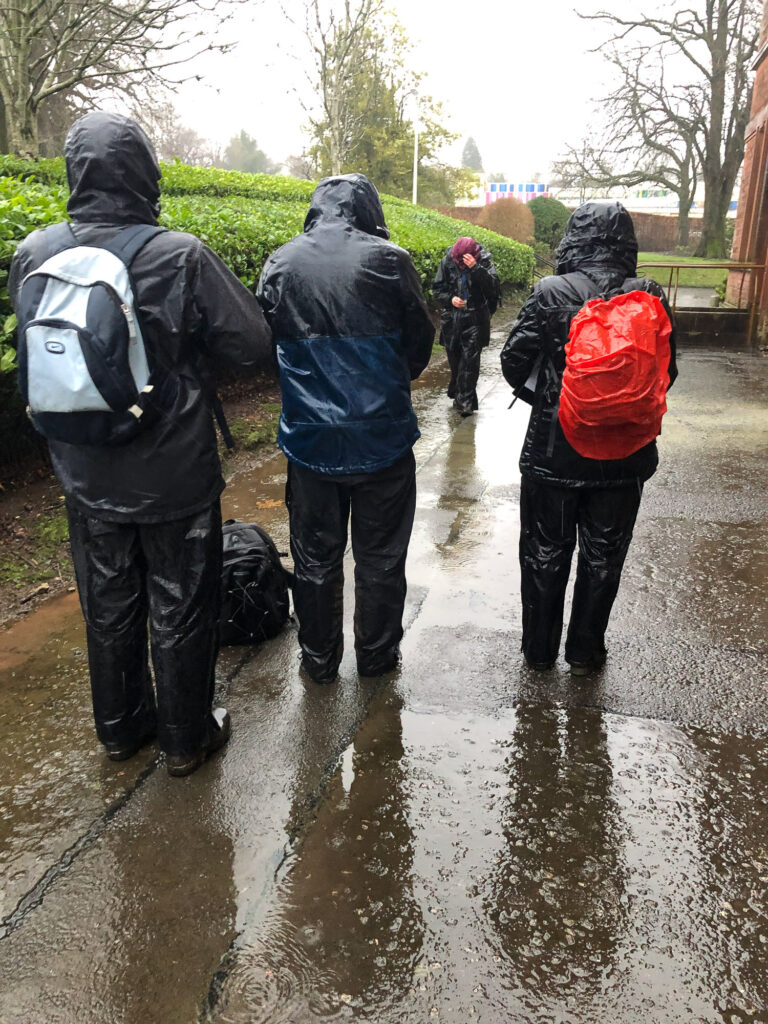 A very sodden recording  group, mostly with their  backs to the prevailing wind.

We gathered at the north side of The Crichton on a very drookit day to record the bryophytes of the grounds. After sheltering in our cars for a while the group bravely headed out, with some feeling of ‘must be mad’. The original Crichton buildings date from circa 1838 and was intended originally to be a university, however this was not permitted and for 175 years it was a psychiatric hospital. It is ironic that this is now part of three different universities. The parkland has some beautiful mature trees, many limes, covered with a wide range of epiphytes. We recorded 19 epiphytic species in total, with the lingering feeling that some others may have been missed because of the difficult weather conditions. Some trees were covered in masses of Syntrichia papillosa, and Orthotrichum tenellum was found on numerous trees. The later was first recorded in Dumfriesshire in 2005, and is only known from three other localities, so it was exciting to see it here on so many different trees and in such abundance. Surprisingly the one epiphyte we didn’t record was Orthotrichum pulchellum, although there is a third monad which includes a rock garden and shrubbery, that we didn’t have time to look at, so it may still be found at The Crichton.  A bank at the side of The Crichton chapel had an abundant fertile population of Phaeoceros laevis. Hornworts seem to be quite common in the urban margins of Dumfries, Anthoceros punctatus having previously been found under half a mile away in the sunken garden of Castledyke Park, and also a sterile population in Dock Park.

The weather continued to be very cold and unpleasant, so having discovered that the café at The Crichton Central was open we headed there for a hot lunch, and to thaw out our frozen fingers and toes. Recording resumed in the 2nd monad after lunch, with blue skies and sunshine. Again, the trees were richly covered in epiphytes, and other species of interest recorded included Bryum radiculosum on the mortar of the old walls, and Fossombronia pusilla at the edge of a path. As the older buildings are all made of local sandstone we searched diligently, but unsuccessfully, for Gyroweisia tenuis, which can often be found on built sandstone structures in Dumfries and Galloway.

The sunshine didn’t last long, being replaced by hail, sleet, and a brief flurry of snow, all four seasons in one day. However, despite the difficult conditions our efforts recorded 83 species for the estate, a useful contribution to our knowledge of the urban flora of Scotland for the Botanical Society of Scotland, as well as records of the biodiversity of The Crichton grounds.

Photo by Bob Merritt, a very sodden recording  group, mostly with their  backs to the prevailing wind.