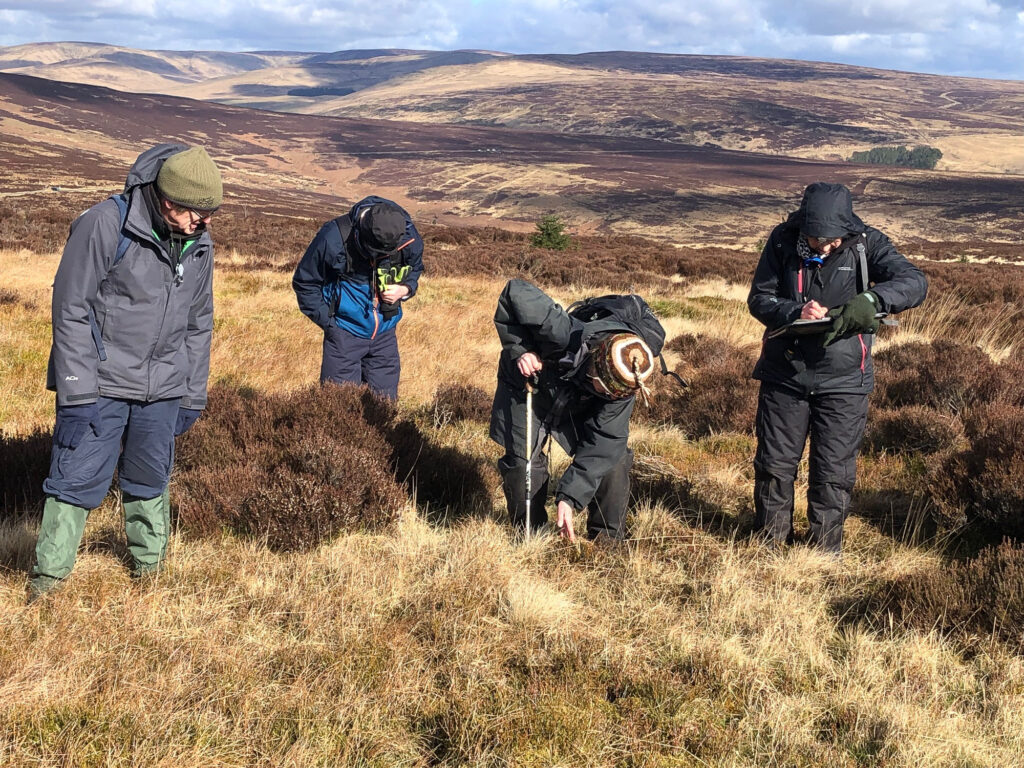 The recording group hunting for different Sphagna on Charlie’s Moss, Whita Hill, with the expanse of the reserve spread out behind them. Photo: Bob Merritt

Since the inception of the South West Scotland Recording Group, we have focused a lot of our effort on recording areas protected by conservation bodies. In continuation of that aim, we have started to record the 5,200 acres of the Tarras Valley Nature Reserve, which was bought by the local community in March 2021 as the first phase of a successful community buyout.

Malcolm’s Monument on Whita Hill dominates the town of Langholm and stands on the western boundary of the reserve. It was built in 1835 to commemorate local man General Sir John Malcolm and we met at the car park for both the monument and the Hugh MacDiarmid memorial. A short walk down the road took us into the reserve at NY3885 where we stated to record the walls, roadside and then Charlie’s Moss. Much of the east flank of Whita Hill was previously managed for Grouse shooting, and still bears the scars of repeated muirburn. The heather is very even aged, with little diversity, and we were hunting for small wetter areas with remnants of bog, or cairns or other microhabitats. A little hard searching provided seven species of Sphagnum, and Bob found Gymnocolea inflata at the edge of a path.

The second monad NY3884 includes the majority of the quarries used to provide the sandstone for Malcolm’s Monument. As these quarries have been abandoned now for almost 200 years, they are well vegetated and offered some diversity of habitat. One quarry gave us shelter from the wind for our lunch spot, and one of the largest, which was well flooded, had a good population of Brachydontium trichodes on the vertical sandstone walls. This is an uncommon species in Scotland, known from only 4 other sites in Dumfries and Galloway, two of which are in the hectads adjacent to this one. After examining the quarries, we headed downslope towards the Little Tarras Water, and the extent of Sitka spruce invading the moorland was soon apparent. The Craigs above Rowantree Well are well named, as there is still an ancient rowan tree growing out of the rocks of the low craig. This provided some epiphytes for the monad, and a small population of Mylia taylorii among the rocks. Further downslope the peat covered rocks had a scattered population of Leptodontium flexifolium, with abundant sporophytes. We then descended to the Little Tarras Water, and recorded the west bank of the stream where birch woodland is starting to extend upslope. Sphagnum angustifolium occurred on wet ground closer to the stream and although the ground appeared uniformly acid the presence of Sphagnum teres indicated some base rich flushing from the sandstone above. The more mature trees by the stream had a small range of epiphytes and Hygrohypnum ochraceum and Hyocomium amoricum were common in or at the edge of the stream. This was the last monad for the day, as we still had over a mile of Molinia moor to traverse to walk back to the cars. Although each of the three monads had a limited diversity the total for the day was a commendable 86 different species.