Salisbury Plain military training area is roughly the same size as the Isle of Wight, but its bryological interest is unevenly distributed. A bryophyte survey undertaken for Natural England in 2015 showed that nearly all populations of notable species are in the east, on land close to the army garrisons of Tidworth and Bulford. This field meeting was planned to introduce WBG members to some of the plain’s specialities in this area; however, the original date in February was soundly scuppered by Storm Eunice. The plain is definitely not a good place to be in strong winds and rain.

However, our second attempt went to plan and 9 of us met in lovely sunny spring weather. We parked up just north of Sidbury Hill and found so much of interest before lunch that we barely wandered more than 200m from the cars. First up we admired Pottiopsis caespitosa, a rare and tiny moss which grows in dense patches in ‘tank-grazed’ rich chalk grassland with a substantial clay surface fraction. There must be millions of individual plants in the valleys around Sidbury Hill and we became adept at spotting the patches from a distance, as their mature capsules made the ground look red-brown. Next we hunted down an even smaller plant – the diminutive leafy liverwort Oleolophozia (Lophozia) perssonii. To find it we first had to locate suitable habitat – sheltered, bare chalk on the edges of tracks – then peer closely at the ground, searching for tell-tale smudges of pale green. Much of the time these turned out to be the common Mesoptychia (Leiocolea) turbinata but once found, O. perssonii was easy to identify because of its clusters of brown gemmae at the shoot tips. On even tiny fragments of chalk in the same places we came across lots of Seligeria calcarea, with masses of tiny, wide-mouthed capsules.

A few larger species provided a bit of respite and one of these – Abietinella abietina var. hystricosa – was much admired in its mossy turf of Entodon concinnus, Homalothecium lutescens and Hypnum cupressiforme var. lacunosum.

We took lunch on the banks of an ancient earthwork where Aloina rigida is known to grow. On such a dry day, there was little chance of finding it, but we did see one of the few remaining fragments of the Southern Hepatic Mat in southern England, its hepatic interest here represented only by Scapania aspera.

Passing a lady knitting in a deck-chair (as you do) we descended down into the stunning dry valley west of Sidbury Hill. Here we came across much more Abietinella and Pottiopsis and numerous dark tufts of Didymodon icmadophilus were compared to the similar-looking but common D. fallax, which grew with it in disturbed flinty ground.

Sharon had seen a population of Weissia sterilis high on the flank of the hill previously so we headed uphill, following an interested former track/earthwork which had more bare ground than vegetation. We did find W. sterilis as we went up, but true to its name few capsules were present. However, a bonus species in the same area was Bryum torquescens, coyly advertising its presence with capsules.

Highland cattle with newborn calves were penned in to graze the chalk grassland on the ramparts of the Iron Age hill fort on top of the hill so we didn’t venture there. However, a number of plants of Encalypta vulgaris, growing among E. streptocarpa, had to be photographed as they looked so stunning. Marion had been the first one to spot this plant near our lunch spot.

Just as we returned to our cars two raptors were seen in the distance. One was a familiar Red Kite, which had been around for much of the day, but the other was confirmed by Alastair with binoculars as a Short-eared Owl. It wasn’t clear who was mobbing who, but it was an excellent finale to a great day. 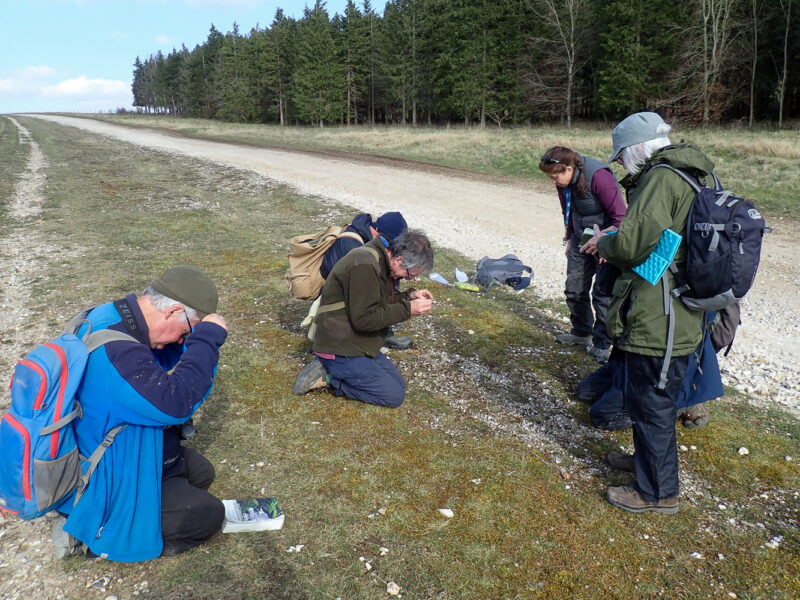 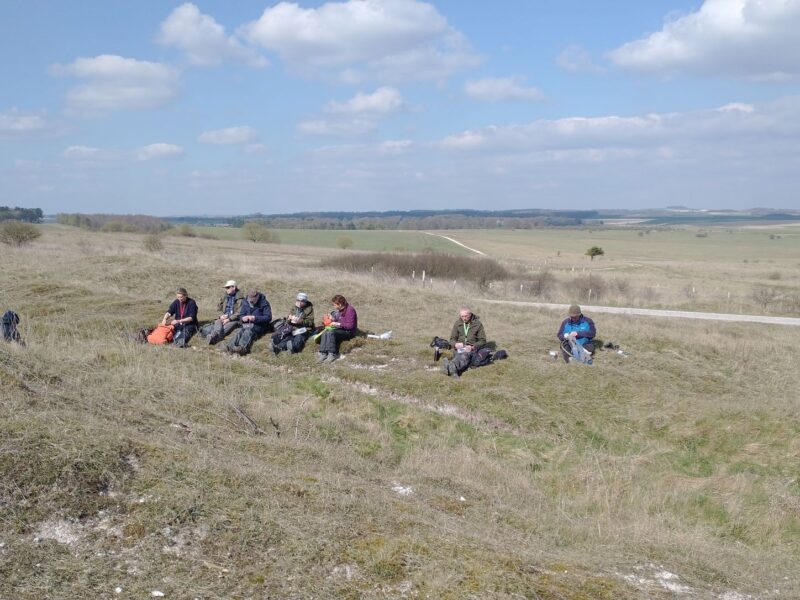 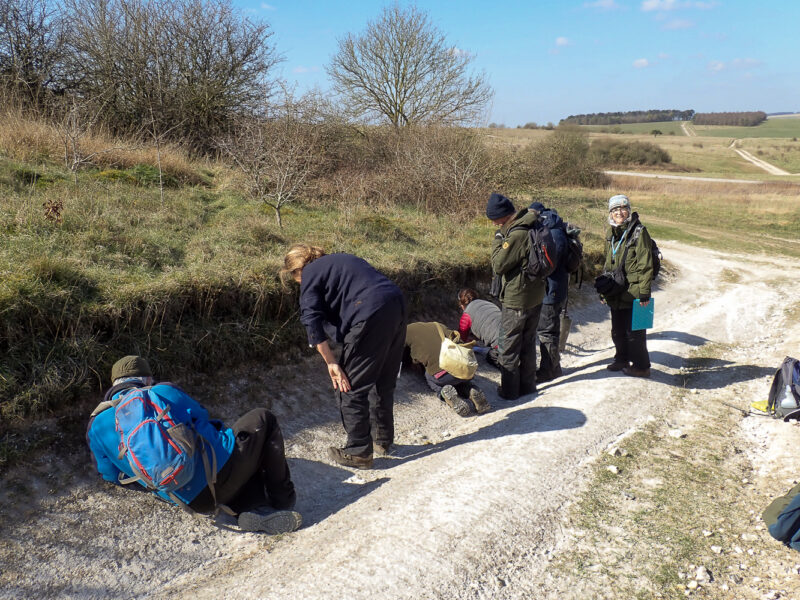 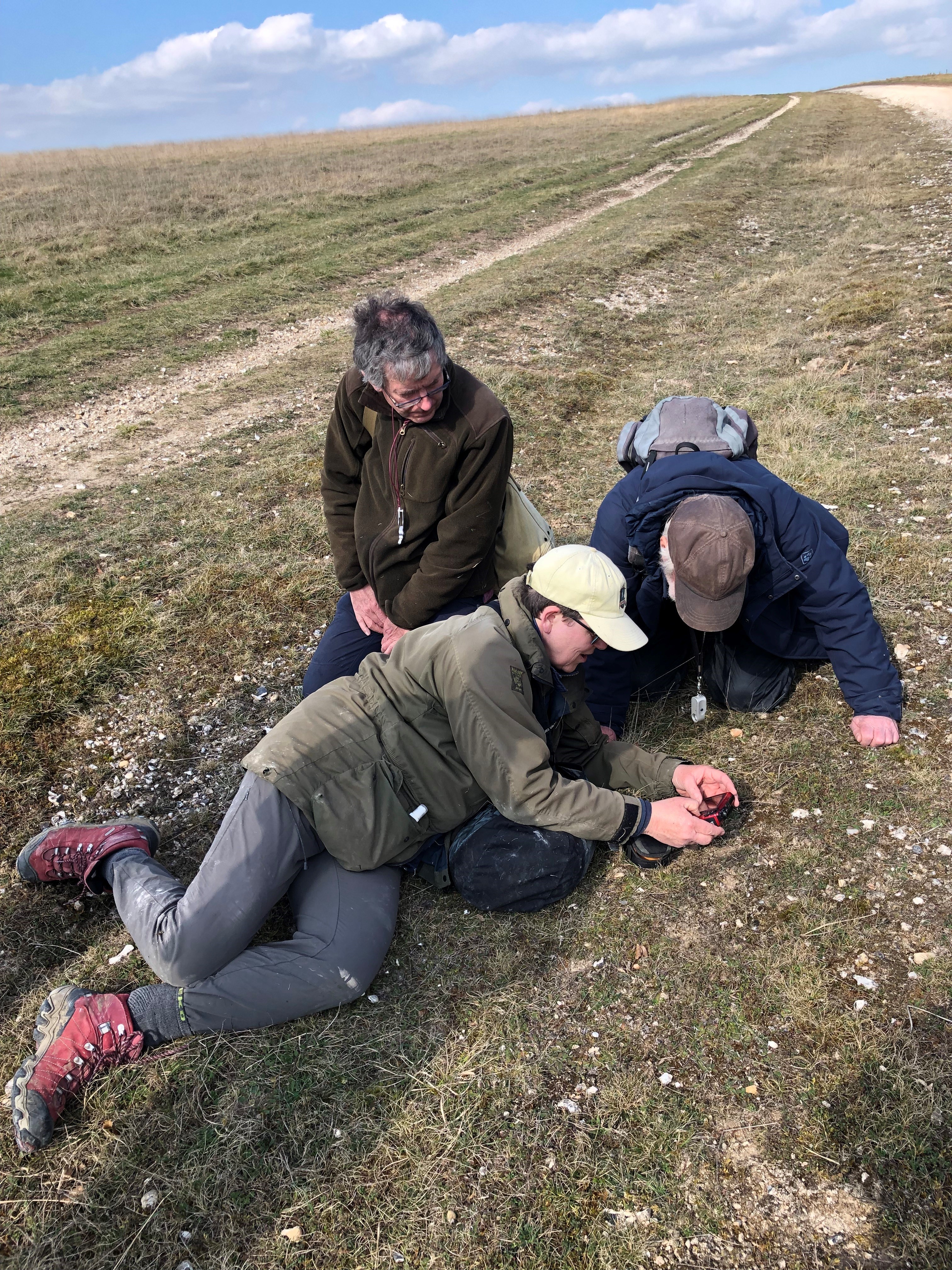 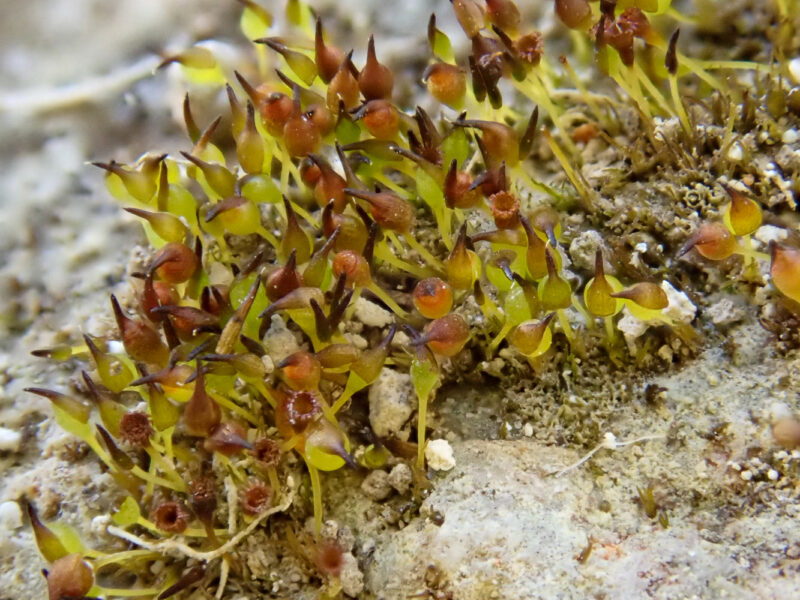 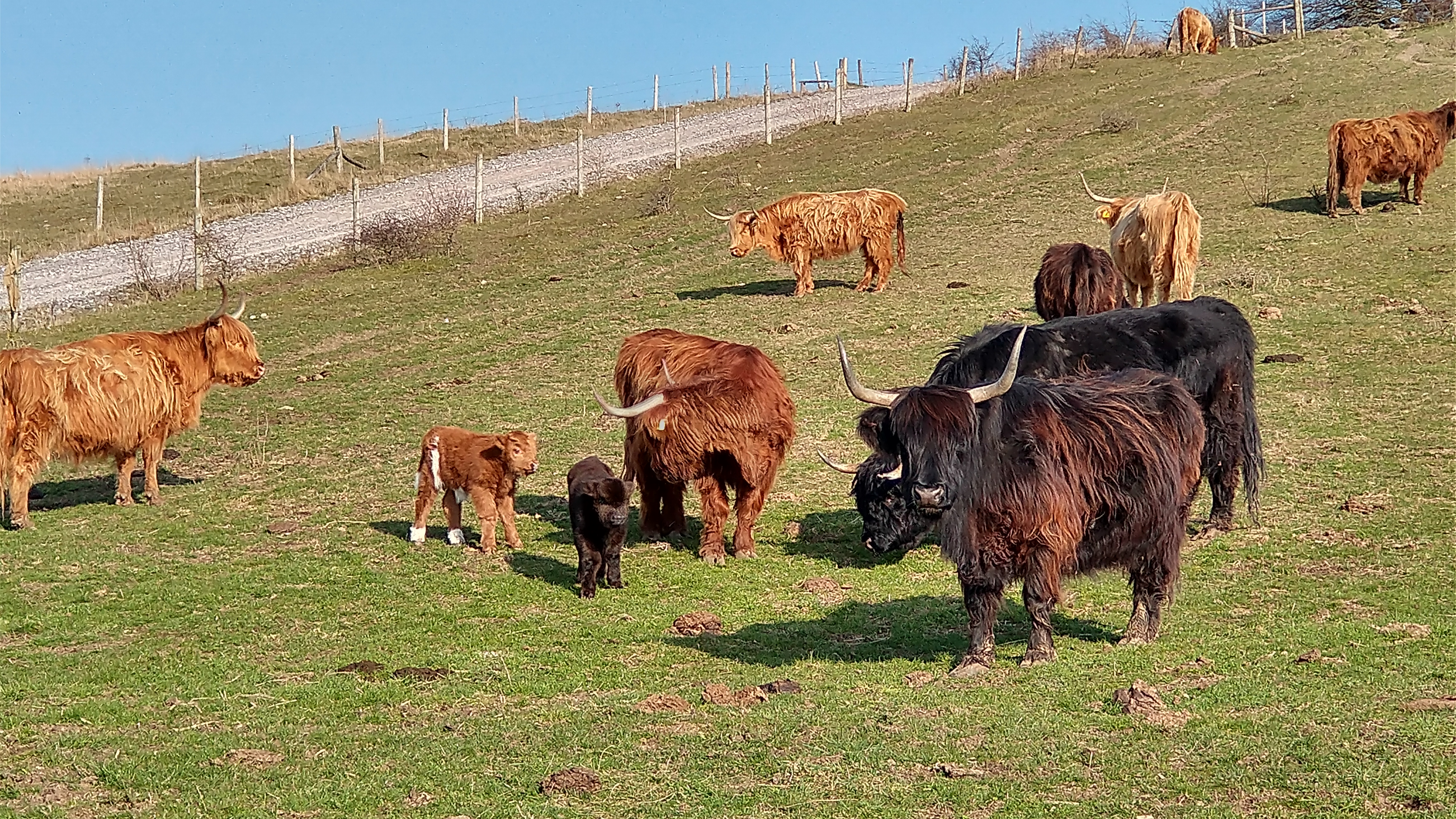 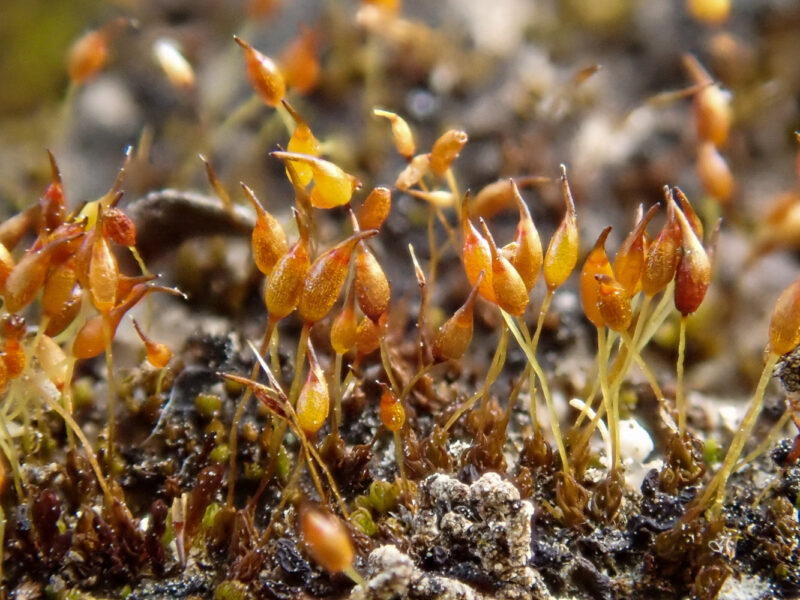 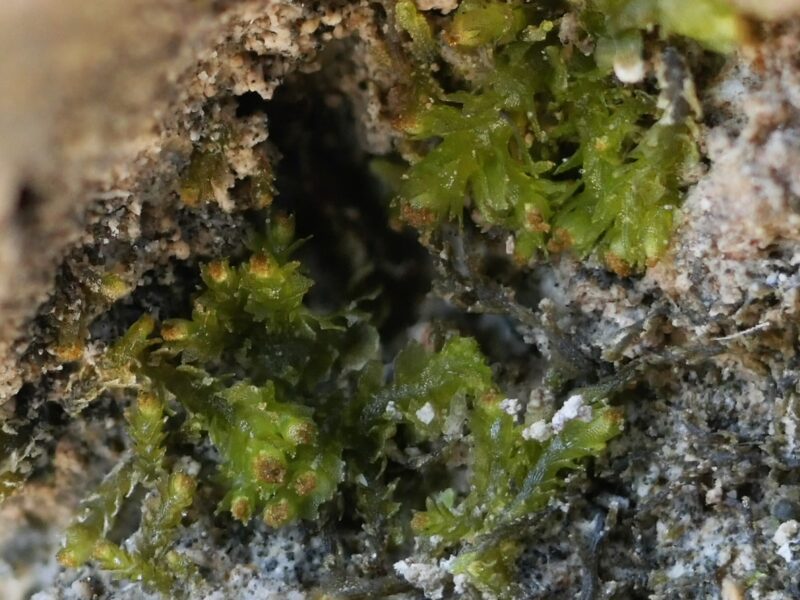 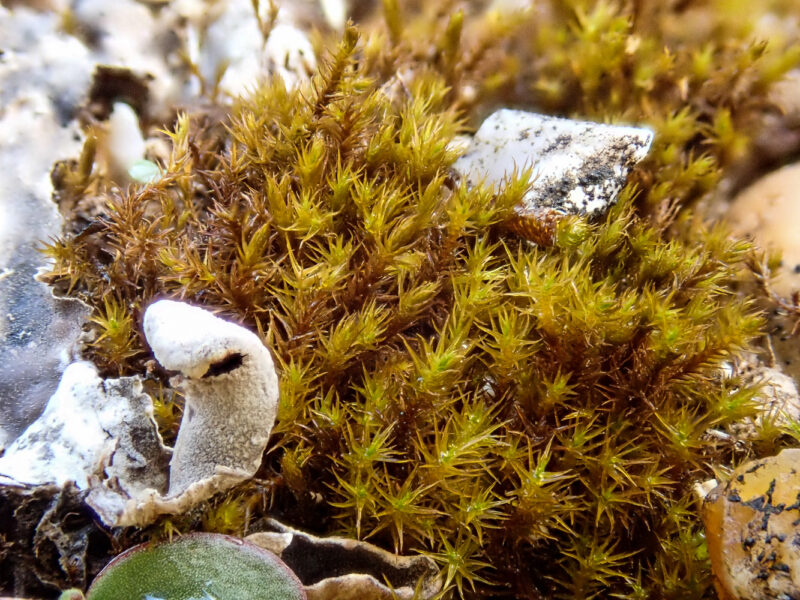 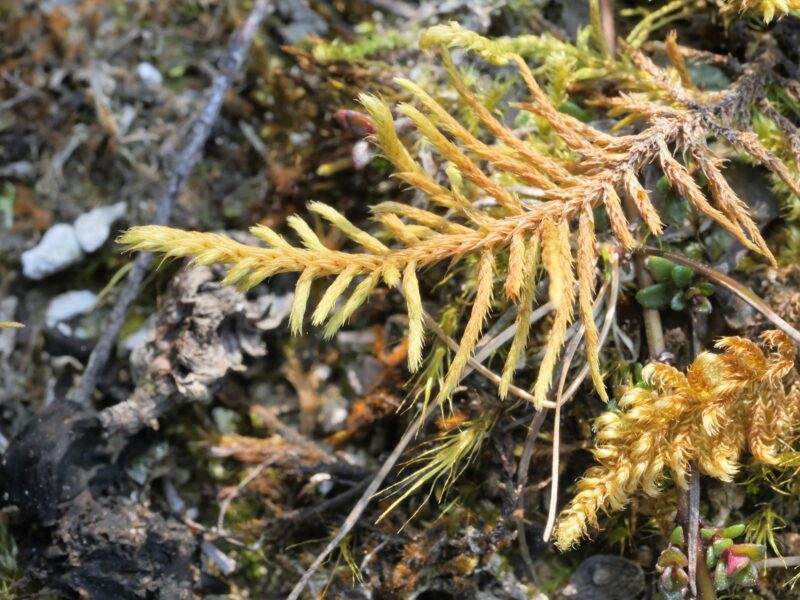 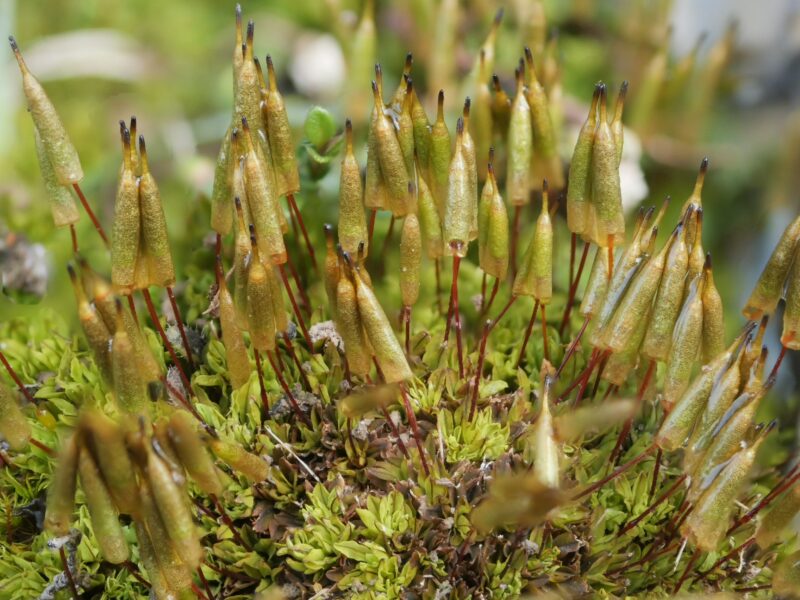 The eastern part of Salisbury Plain is rich in bryophytes and the group has visited it before. This time we will look at a slightly different area, to the north of Sidbury Hill. An intimate mixture of disturbed flinty ground, bare chalk and rich chalk grassland occurs here and we should find Abietinella abietina var. hystricosa, Pottiopsis caespitosa, Tortula lindbergii (lanceola) and Oleolophozia (Lophozia) perssonii. If we’re lucky we could also see Seligeria calcarea and Aloina rigida. This area also has one of Wiltshire’s last remaining fragments of Scapanietum asperae (southern hepatic mat).

Because of potential military training in the area, the meeting place will be confirmed to attendees in early February.