George has now created a basic WordPress website dedicated to bryophilous fungi, which you can find at https://bryophilous.wordpress.com/bryophilous-fungi/. The current page will not be maintained and will eventually be removed.

BBS member George Greiff has become fascinated by bryophilous fungi over the last couple of years, and is keen to get other bryologists out there looking. He has written a couple of articles in Field Bryology and is putting together this guide to some of the more common bryophilous fungi you might see. It is a work in progress, so keep checking back to see what’s new.

Identification: B. brongniartii is one of the most easily-recognised and frequent bryophilous ascomycetes, observed as smooth, bright orange perithecia perforating through the lobes of the host, Frullania dilatata. The asci are cylindrical and contain eight tiny 2-celled, dumbbell-shaped ascospores. When stained with lactophenol cotton blue, the stain preferentially localises to the constricted middle of the spores which results in the formation of a distinctive medial “cyanophilous band” (bottom right images).

Similar species: Bryocentria metzgeriae (not yet known from this host outside of mainland Europe) has different ascospore dimensions and stain localisation. Octosporella erythrosigma is also orange, but generally grows on the surface of the host and has setose fruitbodies with significantly larger, 1-celled ascospores. Periantria frullaniae forms very similar perithecia, but these are always formed within the perianths of F. dilatata and the asci and ascospores of that species are elongated.

Current distribution: Probably present throughout the UK and Ireland, particularly in areas of high host density. 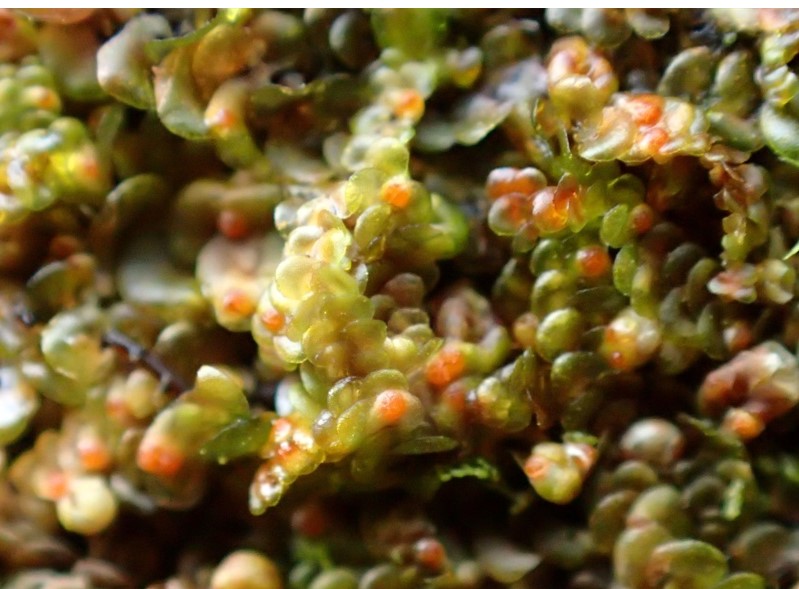 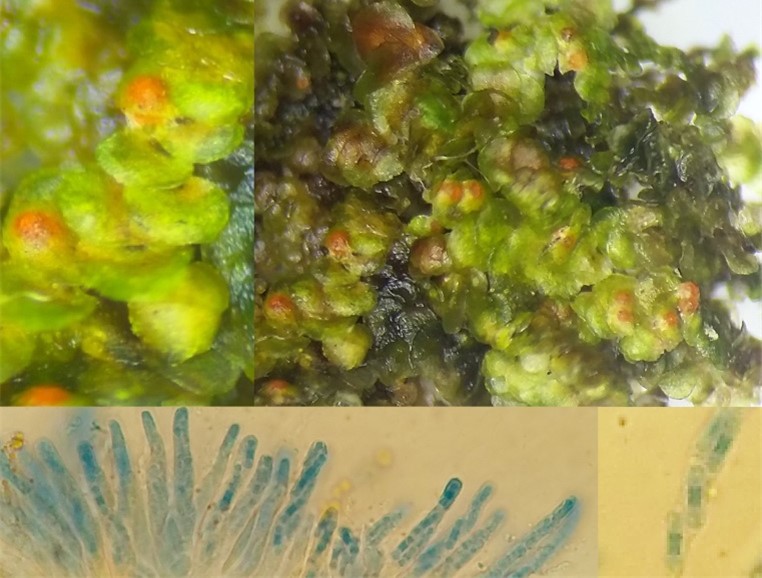 Identification: Pithyella chalaudii (formerly P. frullaniae) is a necrotrophic pathogen of Frullania dilatata (and possibly other hosts). The apothecia of the fungus are whitish to pale orange in colour and often occur on brownish-grey, dead tissues of host plants. The asci are eight-spored and the ascospores are tiny, spherical and have a warted surface (not visible in the images).

Similar species: The lichens Normadina pulchella and Coenogonium luteum (formerly Dimerella lutea) are more similar than most other bryophilous fungi. Occasionally, Bryoscyphus “rhombispora” may be found on epiphytic mosses and liverworts. Macroscopically, the differences between this species and P. chalaudii are subtle, but microscopically the spores of the former are easily distinguished by their rhombus-like shape and greater size. 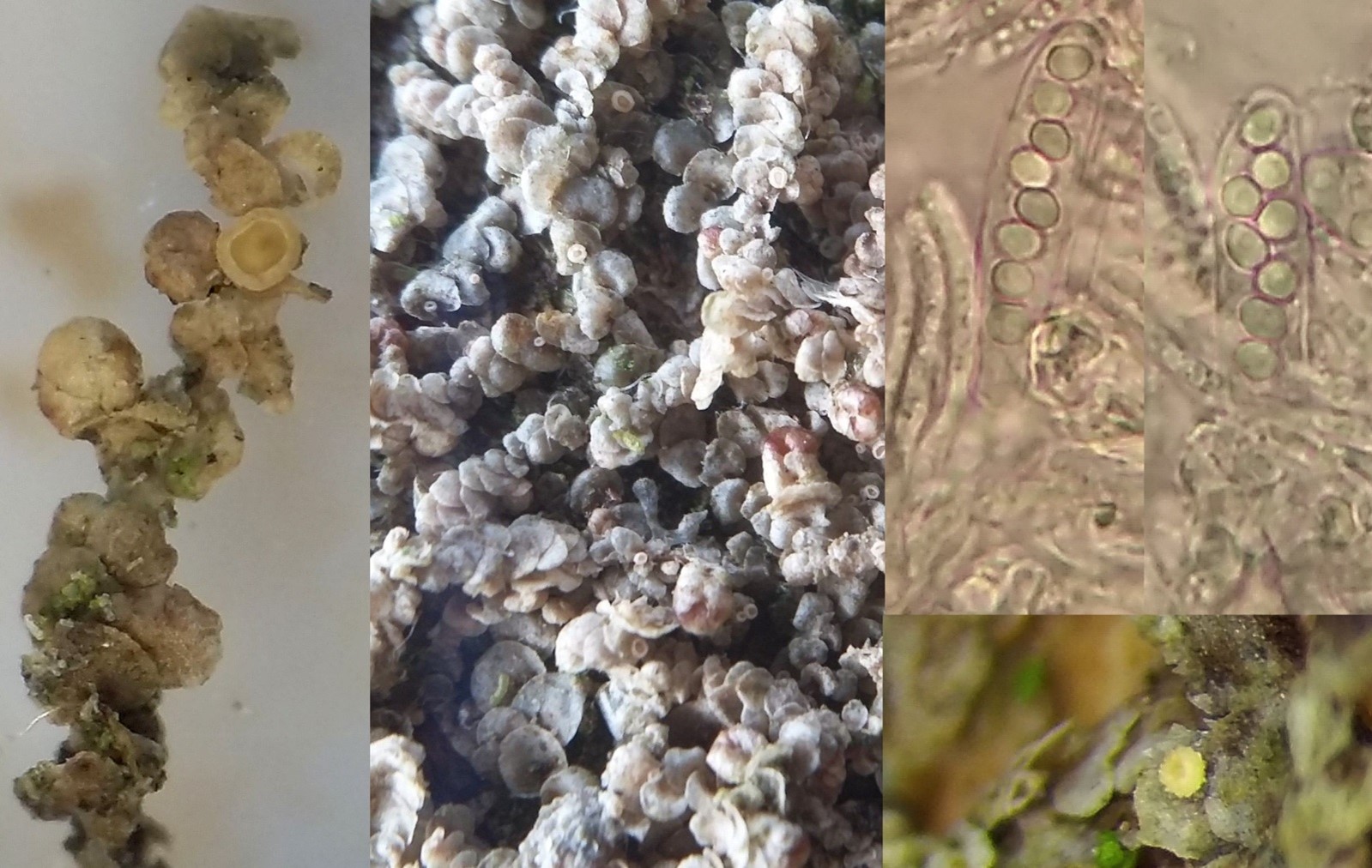 Identification: Lizonia emperigonia is a very distinctive fungus found in the antheridial (male reproductive organ) cups of Polytrichum commune, turning them black. Upon closer inspection, the cups can be seen to be infested with many small, cannon-shaped perithecia. The asci are club-shaped and contain eight ascospores. At maturity, the ascospores are brown, 2-celled and constructed at the septum.

Host preferences: Polytrichum commune, but occasionally also on P. formosum, particularly on female shoots where the fungus grows in the leaf axils, presumably parasitizing the archegonia and / or quiescent sporophytes.

Current distribution: Widespread. Probably common in most areas where the host is present. 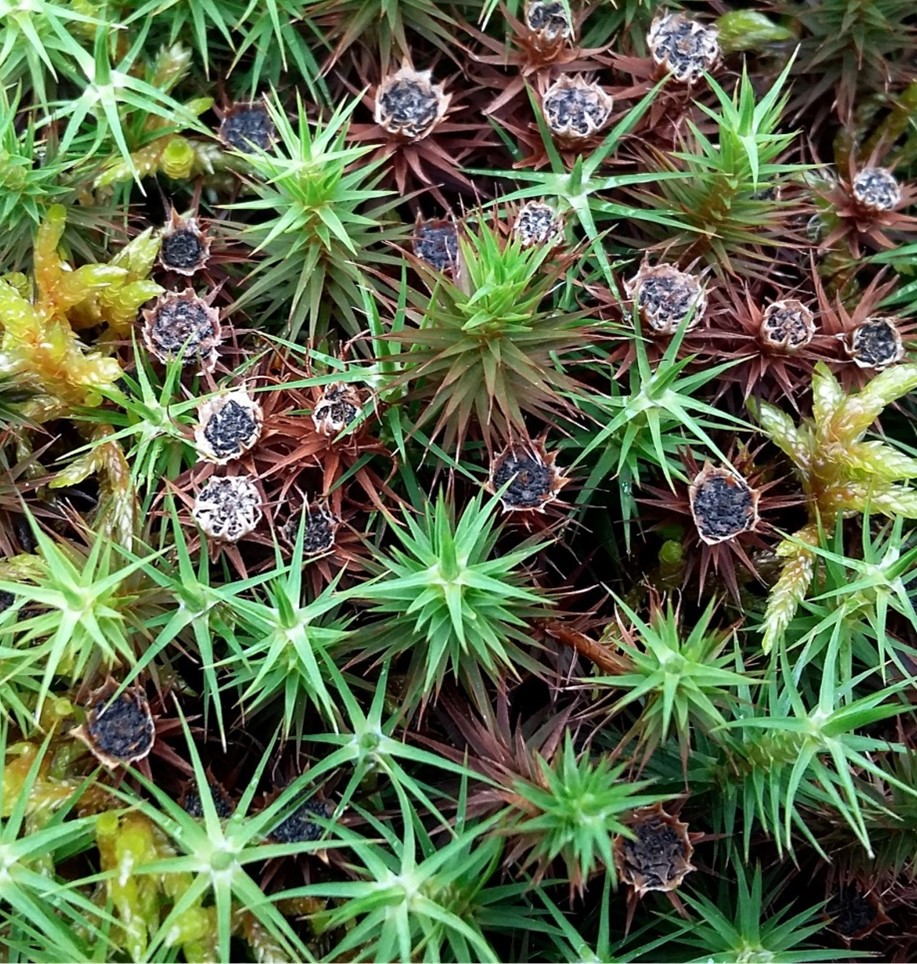 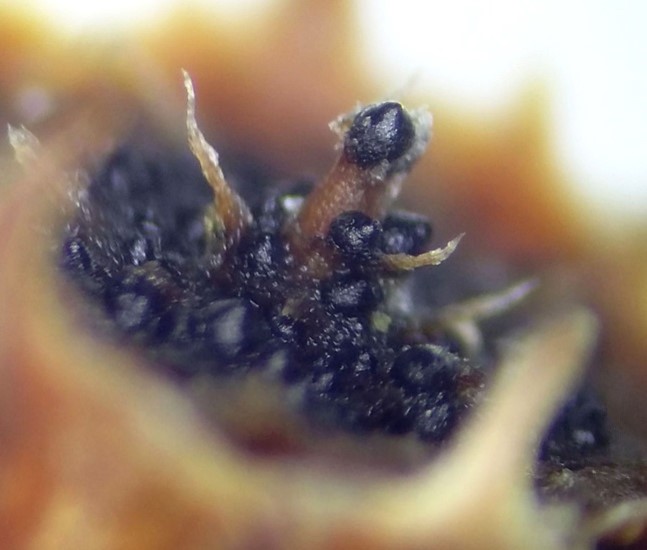 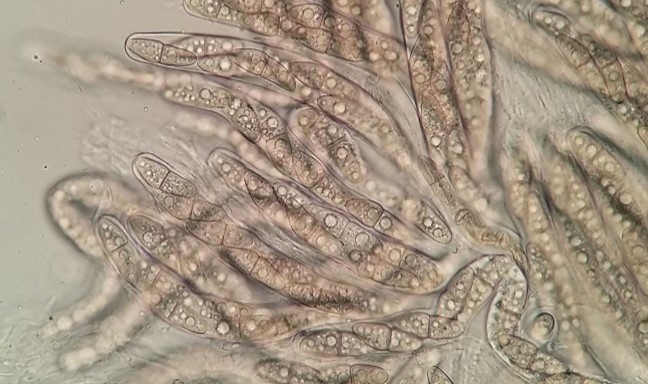 Identification: Periantria frullaniae (formerly Calonectria frullaniae) is a conspicuous member of the orange fungal parasites that may be found on Frullania dilatata. This fungus is specific to the perianths (female reproductive organs) of the host, consuming them from the inside before the orange perithecia bore through the perianth wall to release mature ascospores. Asci are long and cylindrical, and contain bundles of eight multi-septate, elongated ascospores. A while mycelium dominates the interior of the infected perianths.

Similar species: No other bryophilous ascomycetes are known to infect this particular niche of Frullania dilatata, though vigorous infections of Bryocentria brongniartii may result in some perithecia developing on the perianths or the lobes surrounding them. These can be distinguished from P. frullaniae microscopically.

Current distribution: Probably present throughout the UK and Ireland, particularly in areas of high host density. 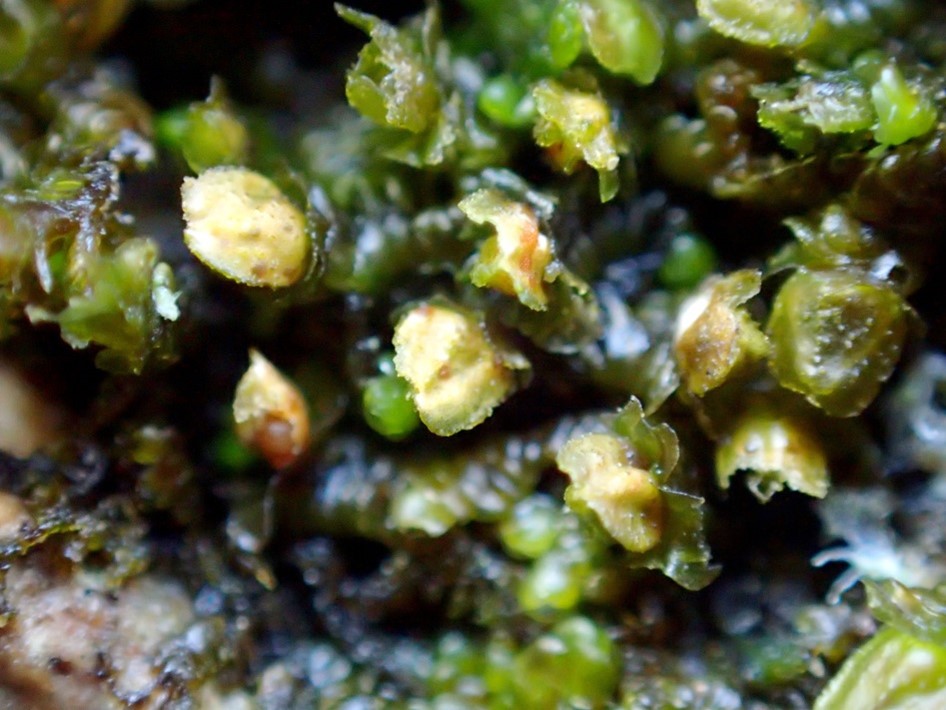 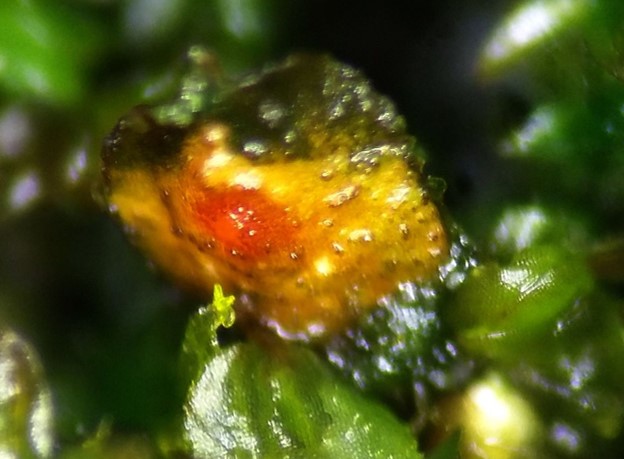