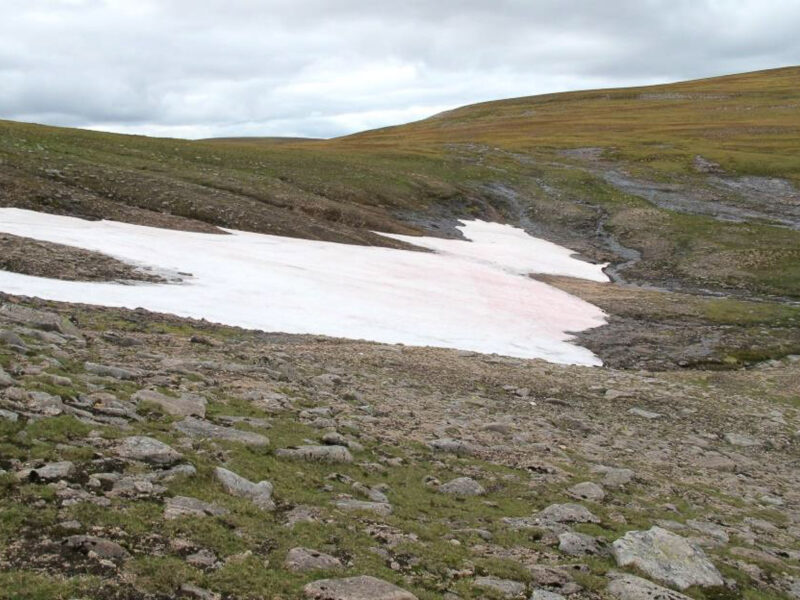 These areas of bryophyte-dominated vegetation occur in the highest Scottish mountains where snow lies late into the summer. They are a mix of greens, browns and reds and all shades in between and the contrast with the remaining snow and the surrounding bare gravels or scree is very attractive. They are wonderful places that have many uncommon species, including some that occur in no other habitat and should be on the itinerary of any discerning bryologist – our own little piece of the arctic.

Download the guide to snowbed habitats as a PDF

During the winter months the Scottish mountains have at least some of their precipitation as snow and general snow cover can persist for days and sometimes for many weeks on the highest hills. The Scottish mountains are windy and, as anyone who has been on a snowy Cairngorm Plateau or on the top of Ben Nevis in any kind of wind will know, snow does not stay where it falls. A big wind can shift prodigious amounts of snow, both fallen and falling, moving it from more exposed areas and onto lee slopes where large accumulations can occur. The depth and extent of these accumulations of wind-blown snow (snowbeds) depends on the catchment area, that is, the extent of the area, upwind of the snowbed, on which there is lying snow. The prevailing wind is usually from the west or south-west and so snowbeds tend to form on slopes with an east or north-east aspect and these are also the slopes on which insolation (solar radiation) is very limited or absent during much of the year. The Cairngorm plateau has by far the largest area of ground above 1000m in the UK and so provides an ideal catchment area and has numerous snowbeds. However, other high mountains also have snow-gathering ground and there are large and important snowbeds on the Ben Nevis – Aonach Mor range, on Ben Alder and on Creag Meaghaidh, with smaller sites on the bigger hills from Ben Lawers in the south to Beinn Dearg by Ullapool.
The stability of our general weather pattern and the very limited changes to the shape of the land over the relevant time scale means that these snowbeds tend to form in the same places each winter and that they are normally on slopes or in hollows with a north or north-easterly aspect. When the more general snow cover melts, these remnant snow patches are visible in much the same places year after year. The depth of accumulated snow and the limited insolation mean that these snowbeds last for much longer than the general snow cover and the most persistent snow usually remains as very large patches into July and some hollows and coires often retain a few small patches until the snows come again.

This persistent snow cover on these sites has an effect on the vegetation. The very short growing season means that vascular plants are at a disadvantage and have only a patchy presence here and the vegetation tends to be dominated by bryophytes with the addition of a significant lichen element on the drier soils and on the rocks. The National Vegetation Classification has a number of chionophilous (snow-loving) plant communities but the two main vegetation types on the bryophyte-dominated ground are the Polytrichum sexangulare – Kiaeria starkei snowbed (U11) and the Salix herbacea – Racomitrium heterostichum snowbed (U12). Also included within the vegetation described here are the more bryophyte-rich stands of the Carex bigelowii – Polytrichum alpinum sedge heath (U8) and the Deschampsia cespitosa – Galium saxatile grassland (U13).
A more detailed analysis of the U11 and U12 vegetation was carried out by Rothero in 1989 and 1990 and this maintained the Polytrichum sexangulare – Kiaeria starkei community, split off a Marsupella brevissima – Anthelia juratzkana community from U12 and described a Pohlia ludwigii community from the wetter areas in the snowbeds. These three plant communities occupy the areas where snow lasts longest, with the Polytrichum sexangulare – Kiaeria starkei tending to occur under the latest lying snow. These communities are very similar to those occurring in areas of late snow lie in Scandinavia.

Bryophyte-dominated snowbed vegetation as described here is rare in the UK, perhaps covering only a few hundred hectares and it contains a number of nationally rare and scarce species and so is of considerable conservation interest. It has a number of species which have most or all of their Scottish records from within this vegetation and these are listed in the Snowbed bryophyte descriptions section below. This section also includes the conservation status of the species; almost all are on the UK Red List and one species is on Schedule 8 of the Wildlife and Countryside Act. However, it should also be realised that much of the cover in snowbed vegetation is provided by common, ruderal species like Nardia scalaris, Diplophyllum albicans, Cephalozia bicuspidata and Oligotrichum hercynicum.

Overall distribution across the regions

The U11 Polytrichastrum sexangulare – Kiaeria starkei community is the most widespread of the bryophyte dominated snow beds and occurs from Ben Lawers in the south as far north as Beinn Dearg in Wester Ross. The condition essential for the establishment of this snow bed community is stability of substrate with some degree of irrigation, and the best examples of this community occur on the more uniform gravel substrates derived from Cairngorm granite. Large stands also occur on the plateaus of Lochnagar, Ben Alder, Geal-charn and Creag Meagaidh. Although the main species themselves are common, this community is limited in extent in the central and western highlands, including Ben Nevis, where the snow beds are often based on coarse block scree.

Other mosses that can occur frequently are Racomitrium heterostichum and Kiaeria falcata, however these typically have low cover values. Both of these species can occur as conspicuous blackened patches soon after snow melt. The scattered stems and patches of Oligotrichum hercynicum are also common and may be confused with Polytrichum sexangulare with which it can grow in close association. The distinctive glaucous shoots of Conostomum tetragonum, may occur in some local frequency and the bright green shoots of Pohlia ludwigii are commonly found here as scattered shoots amongst the mix of bryophytes.

Two distinctive liverworts that can occur amongst the hepatic mat are the nationally scarce Pleurocladula albescens and Moerkia blytii. The whitish green shoots of the former are an obvious feature either in small swelling cushions, as procumbent shoots amongst other hepatics or occasionally as dense, erect turfs. Moerkia blytii is a thalloid liverwort that can occur as inconspicuous scattered shoots buried in the hepatic mat or it can occur as more distinctive large patches.

Other liverworts that may be frequent in the hepatic mix are Lophozia sudetica, Nardia scalaris and Cephalozia bicuspidata. Of these species Lophozia sudetica is the most constant but least conspicuous, occurring as scattered stems and small patches. Both Nardia scalaris and Cephalozia bicuspidata can occur as dense stands or part of the hepatic mix, usually with a canopy of other bryophytes. Both these species may be little different from the populations familiar to bryologists on disturbed gravelly soil at lower altitudes, however, forms of Cephalozia bicuspidata can show considerable variability and light coloured stems may be easily mistaken on first appearance as Pleurocladula albescens.

Vascular plants are limited in this community. The grass Deschampsia flexuosa and the dwarf herbs Gnaphalium supinum, Huperzia selago and Saxifraga stellaris typically occur as isolated stems, although the first two can be locally frequent. When in flower Saxifraga stellaris can be quite conspicuous.

Within this community there is considerable structural variation and three ‘variants’ are recognised.

Transition to other communities

Snowbed communities do not often form large stands, but rather there are frequent transitions from one to the other. Areas of lower substrate stability show the vegetation becoming more sparse and species of Andreaea and Racomitrium may be well represented. Where snow cover is shorter there may be a transition to a form of Cryptogramma crispa – Athyrium distentifolium snow bed. In wetter areas with finer substrates the community can grade towards Pohlia ludwigii community or the wetter forms of Marsupella brevissima-Anthelia juratzkana snow bed.

Bryophyte species with most or all of their Scottish sites within snowbed areas and their conservation status.
(Red Data Book categories from Callaghan D.A.& Hodgetts, N.G. 2011. A Red List of bryophytes in Britain. Natural England 2021). 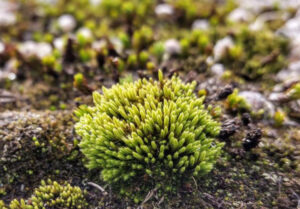 This is a very pretty moss and is unmistakable thanks its bright colour and the strictly five-ranked arrangement of the leaves. It almost looks more like a tiny clubmoss than a bryophyte and when viewed from above, the top of the stem looks like a star. Shoots are usually about 2cm tall but are often much shorter when growing in the high altitude snowbeds. The leaves are sharply pointed, lanceolate, bright green and closely overlap each other.

It grows as scattered stems or, more often, in dense tufts which often jump out at you against the dark background of Marsupella brevissima and other darker-coloured liverworts amongst which it often grows. Capsules are seemingly rare in the snowbeds but can be frequent in the more exposed sites where it can also occur. Like the moss, the capsules are striking, disproportionately large and almost spherical on long straight seta.

Conostomum tetragonum is frequently found in the snowbeds particularly in the Marsupella brevissima – Anthelia juratzkana community and in U11 Polytrichastrum sexangulare – Kiaeria starkei community on thin gravelly soils. In the UK, Scotland is its strong hold with the last records from the Lake District in 1954 and Wales in 1919.
Conostomum tetragonum is a circumpolar arctic-montane species growing in the Arctic, Iceland and Svalbard but also in the mountains of Europe, Himalaya, Siberia, N and E Asia and Japan. 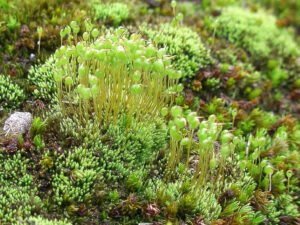