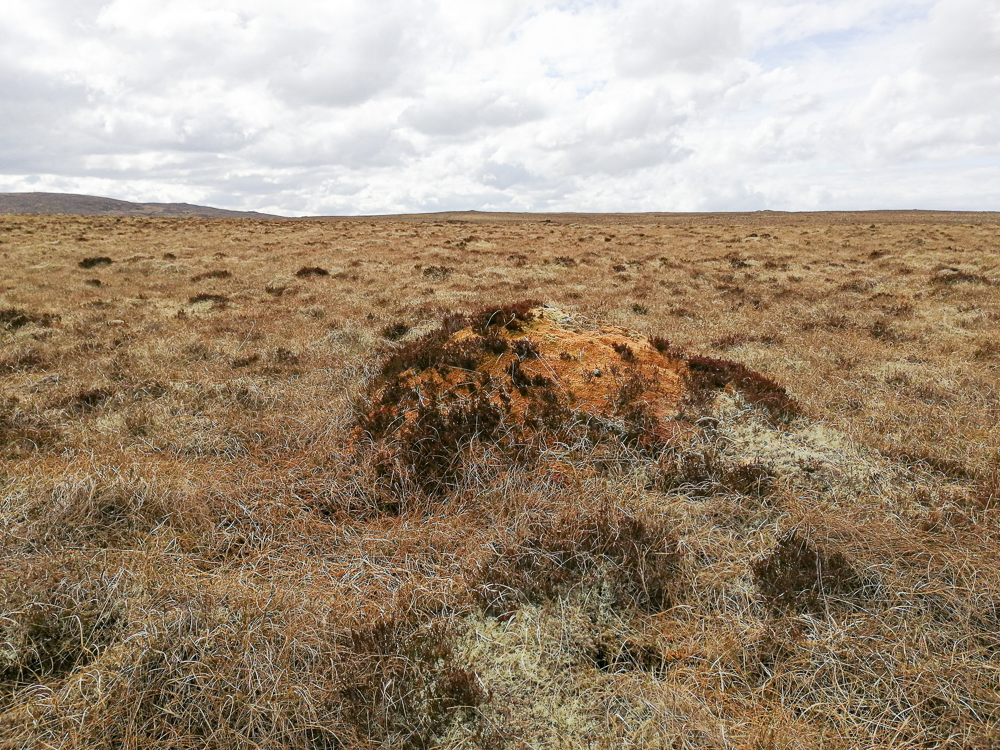 Much of the land surface of the Outer Hebrides is covered in superficially featureless blanket mire. Where undisturbed, this is rich in sphagna (including Sphagnum austinii, shown here) and associated liverworts.

Lying in the far northwest of Britain, the long chain of islands that make up the Outer Hebrides (or Western Isles) has a climate characterised by cool summers and relatively mild winters. Both annual rainfall and the number of wet days per year are high, and bryophytes flourish in these conditions. Not surprisingly, the bryophyte flora includes many species characterised as oceanic or hyperoceanic, with Campylopus shawii and Myurium hochstetteri being particularly noteworthy. The former forms extensive stands in blanket mire and is widespread on the islands, while the latter is a feature of coastal rocks, though its distribution is somewhat patchy. It also occurs on inland crags.

From the perspective of southern Britain, the Outer Hebrides are often described as remote, though they have become much more prominent as a tourist destination over the past few years. Like other ‘remote’ areas, their bryophyte flora is not very well known. Data in the 2014 atlas confirm this, with a relatively high proportion of hectads having no bryophyte records during 1950-2013. The months June to September accounted for almost all records during the period, reflecting the lack of resident bryologists.

In terms of systematic surveys, the uplands of Harris were probably the area best covered during the pre-atlas period, thanks largely to SNH-funded work done in the 1990s in response to super-quarry proposals. There have been two BBS summer meetings in the vice-county: one to the southern islands in 1992, and the other to Lewis in 2007. Since the 2014 atlas, a fair amount of recording has been done on Lewis and to a lesser extent Harris, and many gaps in distribution have been filled in. In the southern islands, there have been targeted (and successful) searches for Petalophyllum ralfsii, which have produced many incidental records. It remains the case, though, that coverage of much of the southern islands, especially away from machair areas, is very poor.

Moorland (mostly blanket mire and wet heath) covers much of the land surface of VC110, being most extensive in Lewis at the northern end of the island chain. Much of the blanket mire is undisturbed and rich in sphagna (including scattered S. austinii, S. beothuk and S. fuscum) and bog liverworts (including Cephaloziella spinigera, discovered recently), although burning has largely destroyed the interest of certain areas and resulted in depressingly large amounts of Campylopus introflexus. Rocks and boulders along the margins of moorland lochs, of which there are many, including the vast Loch Langabhat in Lewis, provide additional interest in the form of locally scarce species such as Schistidium strictum and Nogopterium (Pterogonium) gracile. 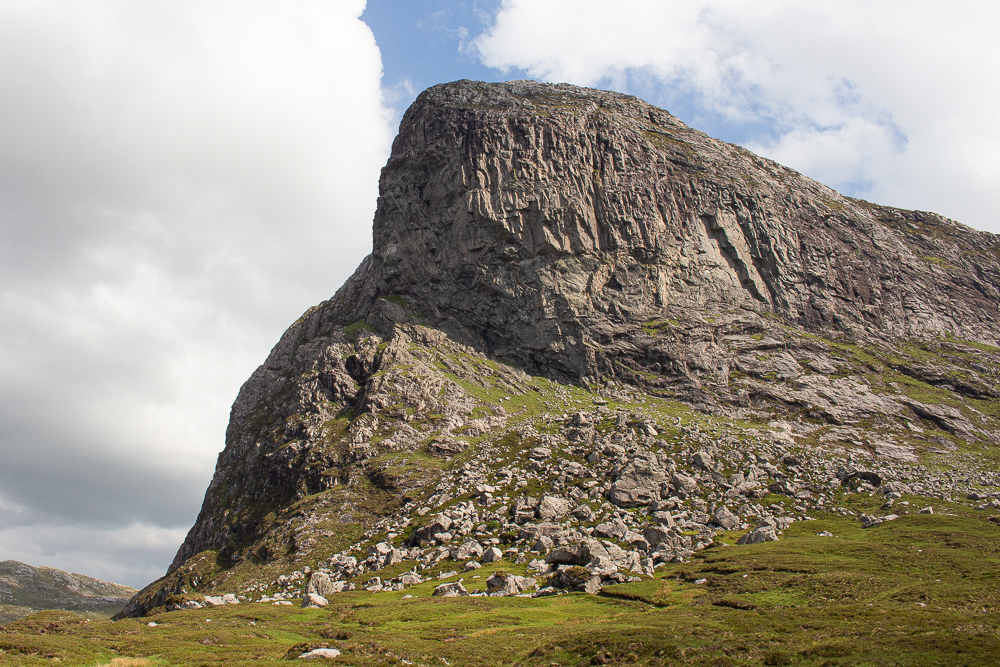 Rowans growing among block scree beneath the famous ‘nose’ of Sròn Uladail in Harris harbour the only known population of Leptoscyphus cuneifolius in VC110.

Most of Harris, together with the western and southern fringes of Lewis, constitute a more rugged landscape, rising to a maximum elevation of 799m asl, with plenty of steep crags, cliffs and ravines, together with extensive areas of block scree. Many north-facing slopes are hardly grazed nowadays and boast a luxuriant growth of heather. Bryophytes of note include ‘hepatic mat’ species, including Mastigophora woodsii, Bazzania pearsonii, Plagiochila carringtonii, Scapania ornithopoides and S. nimbosa. Sphagnum skyense occurs sparingly.

Other areas of high ground are found in South Uist, rising to 620 m asl on Beinn Mhòr. These have received minimal attention from bryologists, but a one-day visit during the 1992 BBS meeting produced records of the same hepatic mat species as are found further north. Beinn Mhòr is the site of the only Outer Hebridean record of Kiaeria falcata (from 1968), and one wonders what else is still to be discovered in this under-worked area. 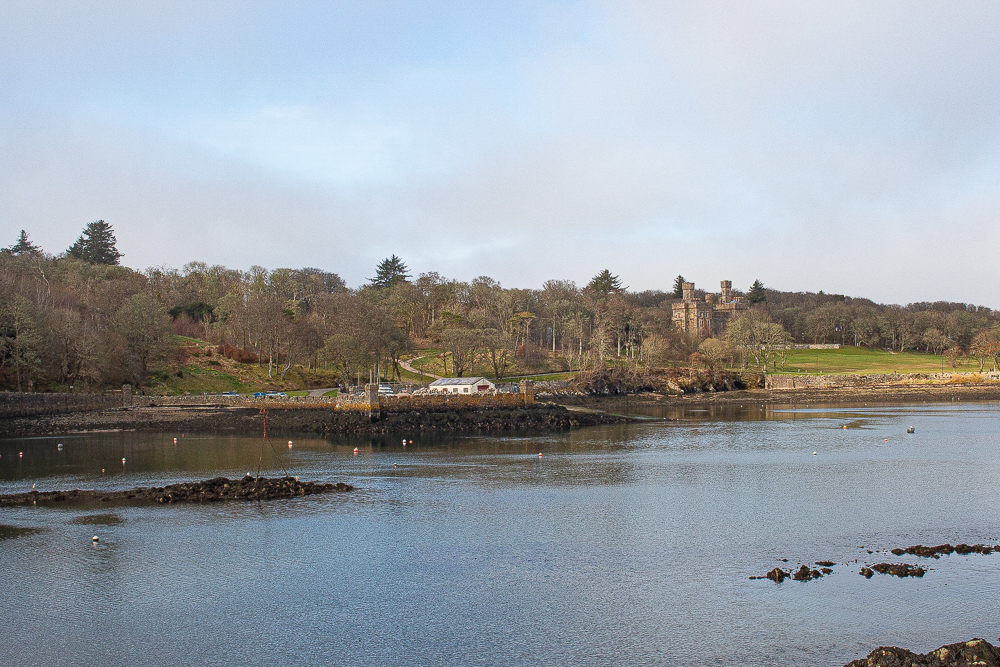 Except for recent conifer plantations, Stornoway castle grounds constitute the most extensive area of woodland in VC110. The bryophytes include two species not yet recorded elsewhere in the Outer Hebrides: Orthodontium lineare and Microeurhynchium (Oxyrrhynchium) pumilum.

One feature that no visitor to the Outer Hebrides can fail to notice is a distinct shortage of trees. By far the largest and most diverse woodland tract is the one surrounding Lews Castle in Stornoway, planted in the 19th century. Other plantations of varying ages occur all the way south to Barra, most of them of course being coniferous and of limited bryological interest. Except for scattered rowans, natural woodland is largely confined to crags and to small islands in lochs. It is of severely limited extent, the best example being probably Allt Bholagair in South Uist. Thus the range of epiphytes is restricted and species that are widespread on the adjacent mainland, such as Ulota drummondii, have not (yet?) been found in the Outer Hebrides.

Most of the bedrock in the Outer Hebrides is acidic, and often relentlessly so over large areas, although a degree of base-enrichment can be found in ravines or gullies, at the base of damp crags, or where igneous intrusions occur. Damp gullies and crags can be rich in bryophytes, with small Lejeuneaceae, for example, being widespread.

The most base-enriched areas are those influenced by calcareous shell sand, which accounts for the existence of the ‘machair’, a low-lying plain whose soil is much richer than the otherwise dominant peat, and which features dune systems in places. This habitat type is most extensive along the western seaboard of the southern islands, becoming patchy in Harris and Lewis. Some of the dune systems are very rich, with bryophytes such as Moerckia flotoviana, Encalypta rhaptocarpa, Catoscopium nigritum, Tortella fragilis, Meesia uliginosa and several species of Mesoptychia (Leiocolea), as well as Petalophyllum ralfsii referred to above. In the southern islands, there are also fens harbouring species such as Philonotis calcarea, Plagiomnium elatum and Calliergon giganteum.

VC110 includes several outlying islands, which to say the least are difficult to access. ‘They include the Shiants, North Rona and the Flannan Isles, together with Mingulay and Pabbay (which were surveyed for bryophytes in 2008) in the far south. However, from a bryological perspective the most significant by far is St Kilda. Its exceptional interest was already recognised in the 1990s, but a week-long survey in 2013 of the main island, Hirta, resulted in many significant new records, including the discovery of Cephaloziella integerrima well to the north of its previously known range in the British Isles. Other notable rarities included Fossombronia angulosa and Tortula viridifolia, and Hirta was considered to support perhaps the most important population of Acrobolbus wilsonii in the British Isles. Currently, about 15 bryophyte species are known in VC110 only from St Kilda.