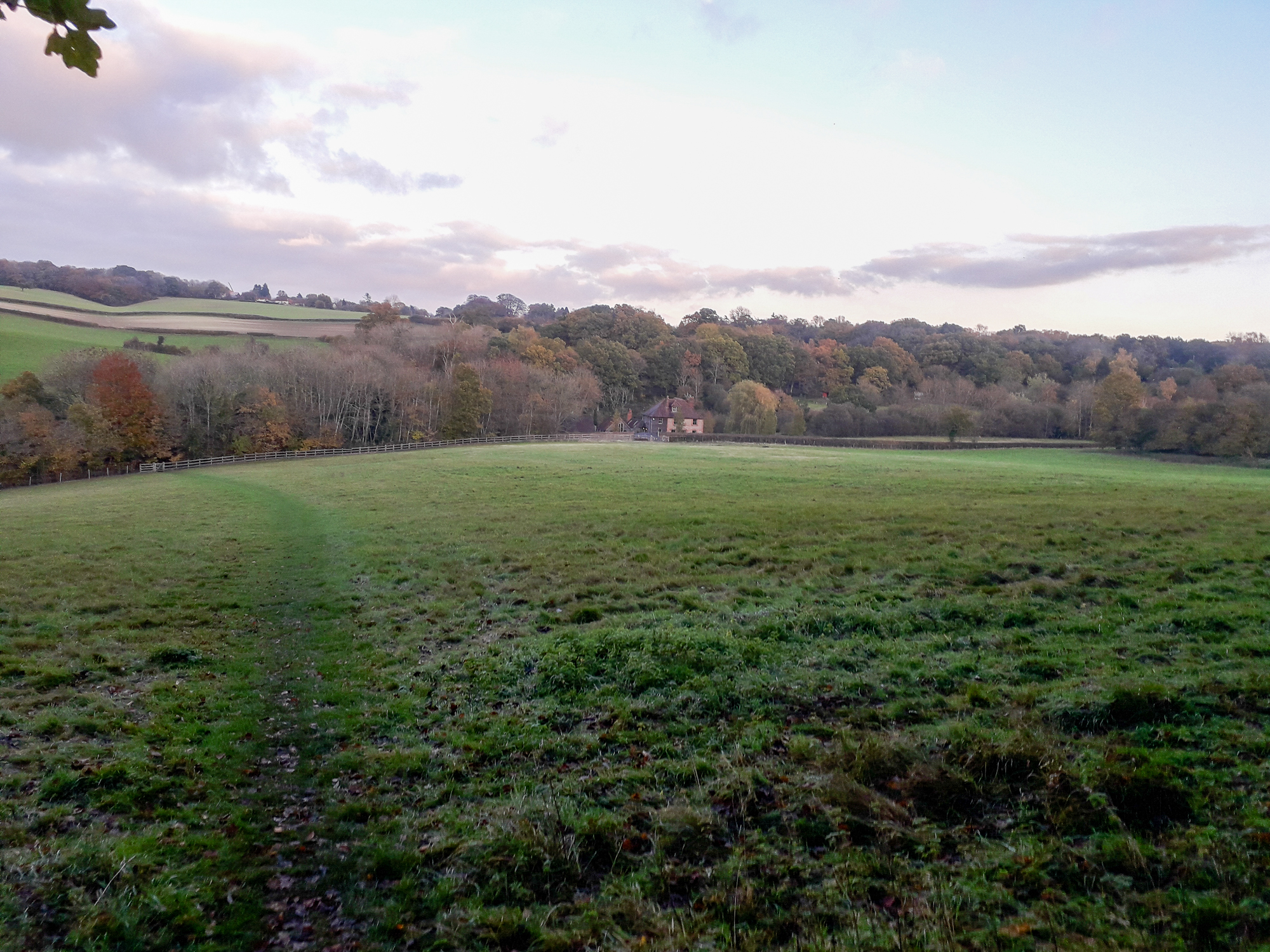 Quite a common scene in Bucks – an extremely boring field, but with a tempting, sheltered woodland in the distance – this is near Turville and I think I can see Dawn French…

Buckinghamshire probably seems like a pretty boring county bryologically, with all of your favourite habitats missing:  no mountains, no seaside, no lovely, deep, damp wooded gorges, no mountain streams, no extensive bogs filled with Sphagnum…Despite this, it does have some bryological treasures, and some landscape that really lifts the spirit and gives a good day’s mossing.  I am literally an amateur mosser, with no training whatever in botany, geology, ecology or any of the ologies which might lend a professional touch to this account.  This is a summary of mossy highlights from someone who is a reasonably experienced field bryologist and who has spent a fair amount of time poking about in Buckinghamshire woods, churchyards, streams, arable fields etc. making lists of the mosses and liverworts for the BBS mapping scheme.  Another point to bear in mind is that my mossing strategy as bryological recorder has been a bit unconventional.  I have, until quite recently, concentrated largely on what I call ‘bryological cold-spots’.   I have deliberately avoided nature reserves, SSSIs and sites that have been visited in the past by notable bryologists such as Ron Porley, Edward Little, Nick Hodgetts, Jeff Bates etc. I’ve tried to seek out places where I could start with a blank sheet and maybe find something really new and exciting.  Boldly going where no bryologist has gone before…so, the sites I mention may not be the very best places to go mossing, just the ones to which I’ve been and that I like.

If you look at a geological map of Bucks, there are two key areas of bryological interest.  Firstly, the chalk escarpment of the Chiltern Hills stretching south-west to north-east through places like High Wycombe, Princes Risborough and Wendover.  This has beautiful beech woods, incredible views over chalk grassland to classic rolling English countryside and much to be recommended for a lovely day out, even if you aren’t interested in bryophytes.   Secondly, the acid soils of the area near Slough in the south east.  Here you will find the only serious-looking sphagnum-boggy bits in Bucks at Burnham Beeches, and some nice acid open commons around Farnham.  North of the Chilterns is largely dull in comparison – flat, largely agricultural land with the occasional bit of nice woodland cowering in fear of HS2.  Don’t get me wrong, some of these woods can be lovely, eg Finemere Wood near Aylesbury, with its incredibly rare Black Hairstreak butterflies, or Calvert Jubilee nature reserve, but just take a look at their websites:

and try not to get depressed.  Keep going north and you get to Milton Keynes…

The Chiltern beech woods mentioned above are really lovely. If you don’t get 60 species in a day’s mossing your glasses need cleaning.  Goodies like Oxyrrhynchium schleicheri, Herzogiella seligeri, a range of Orthotrichaceae (Lewinskya affinis and striata, Pulvigera lyellii, Orthotrichum pulchellum, tenellum, stramineum, diaphanum), and the occasional extra like Brachythecium salebrosum could be on your list.  You’ll also have some magnificent beech trees to admire and if you’re not duffed up by badly behaved dogs and their obnoxious owners, will have a great day out.  Look out for hornets (scary but not troublesome), lots of red kites and buzzards.

This is a common habitat in Bucks away from the Chiltern beech woods and can seem unpromising at first sight.  However, it can yield some nice, unexpected, exciting things like Sematophyllum substrumulosum on decaying pine logs, or Orthotrichum schimperi on an old hazel. 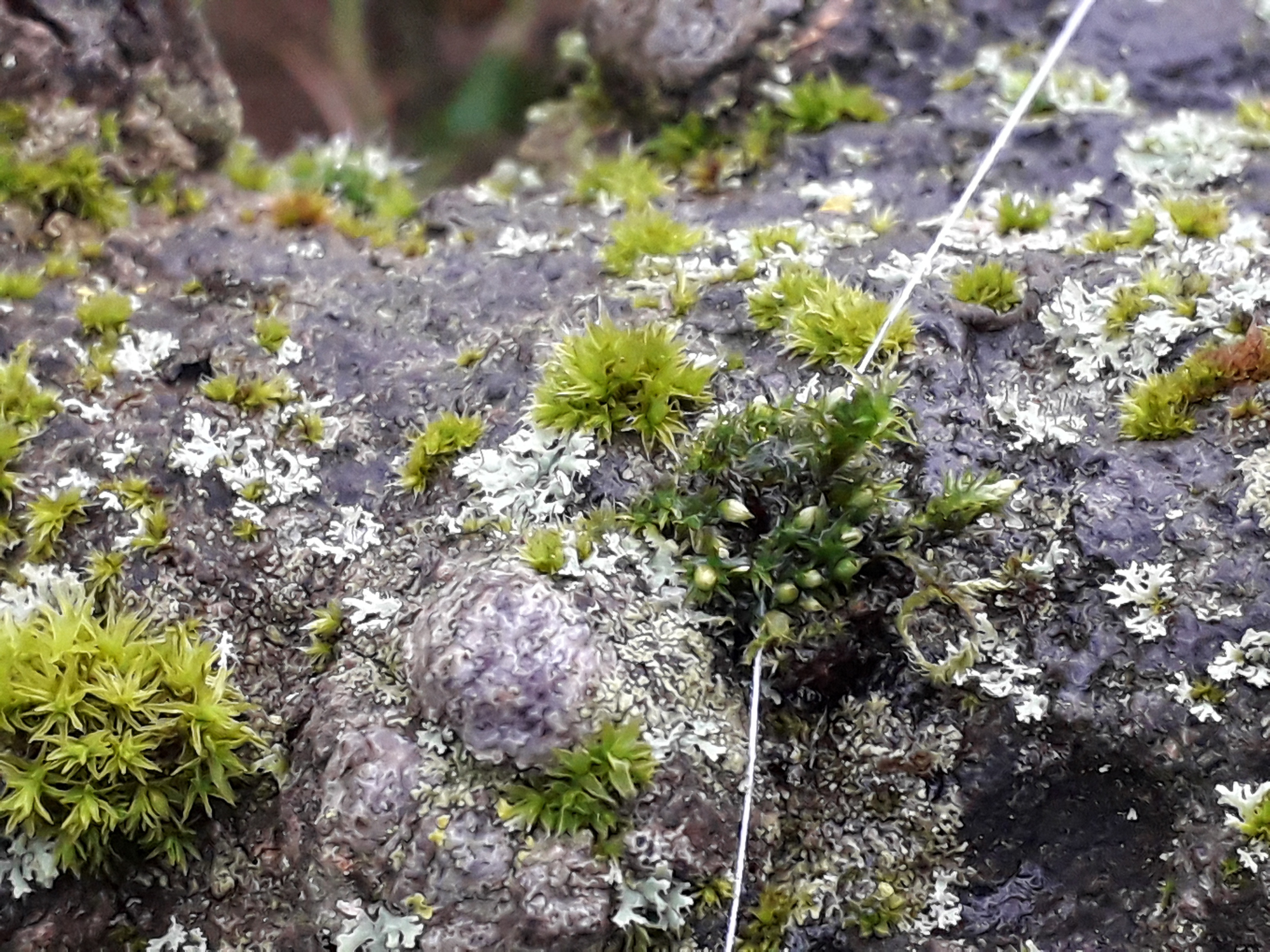 You might wonder why this Orthotrichum schimperi is tied on with dental floss…I collected it in Cockshoots Wood SP8704 with unripe capsules. I tied it onto the apple tree in our garden to ripen up (successfully).

Going around dull churchyards is just something bryological recorders have to do.  But then occasionally, just occasionally, you find something fantastic: Leptobarbula berica, Grimmia decipiens and…wait for it, Grimmia crinita have been found in churchyards in Bucks, the latter an extreme national rarity. Species like Leucodon sciuroides are found in Bucks almost exclusively in churchyards.  Besides the mosses of course, some churchyards can be real gems and a great place to have your sandwich. You know that there will be parking, and somewhere to sit without someone saying, ‘Can I help you?’  I met Lord Carrington once in a churchyard in Bucks.  He stopped to chat but turned down my offer to share my sandwiches.  I guess he had probably just had lunch.

There is still some of this left in Bucks, but you have to look quite hard.  Such habitat in Bucks is usually in Nature Reserves these days.  It is also hard on the knees, but the rewards are rich. Flexitrichum gracile, Homalothecium lutescens, Hylocomiadelphus triquetrus are, of course, a delight, but look closer and you might find Entodon concinnus, Rhodobryum roseum, Abietinella abietina var. hystricosa, Microbryum curvicollum and Ephemerum recurvifolium.

There’s very little of this in Bucks, which has a lot of chalky soil of course, but down in the south-east corner you’ll find Burnham Beeches.  More details below, but this is the only area in Bucks where you will find a real bog with a good variety of Sphagnums – palustre, inundatum, auriculatum and the occasional other species turn up in some wet woodlands elsewhere, but if you want that real feeling of your wellies squelching, this is just about it for Bucks.

The south-east corner of Bucks has some nice acid woodland/heath at Black Park (see below) and Stoke Common (SU9885).  Species like Aulacomnium palustre and Warnstorfia fluitans are quite uncommon in Bucks but can be found here.

Walking along the Thames on the southern edge of Bucks can be surprisingly interesting.  Some parts of it are private, annoyingly, but you can find enough stretches with a footpath to enable you to look out for Dialytrichia saxicola (nationally rare but quite widespread along the Thames) and Hygroamblystegium fluviatile (rare in Bucks). Syntrichia ruralis var epilosa was found, new to Great Britain, on the riverside path near Marlow Bridge.

Always worth a stroll, and a pause at locks to look for unusual Amblystegiaceae, and occasional Hennediella macrophylla on shaded, well-trodden paths.

You’ll be hard pressed to find any interesting arable fields in Bucks – most are as dull as ditch water (although the latter can have Riccia fluitans of course), a rare exception being a nice field with Sphaerocarpos europaeus amongst other goodies, near Chenies at TQ022980

A selection of good places to visit in Bucks

This is the Jewel in the Crown in Bucks, with ancient beechwoods, open heathy scrub, a bog, an amazing ditched monument, ponds, streams…a wonderful site.  There’s lots of information about parking etc. here:

The key bryological sites are:

Look out generally for Orthocaulis attenuatus and Scleropodium touretii.  Burnham Beeches is just the gift that keeps on giving – even though it has been thoroughly mossed by generations of top bryologists, I found three new VCRs there over two visits.  When will it give up all of its secrets?

Not as good as Burnham Beeches, but still a nice area of wet heath, alder carr, boggy bits, all rare habitats in Bucks.  A good selection of Sphagnums.  Information here:

While you’re there, you might continue to the wonderful Pulpit Hill, Grangelands and the Rifle Range:

There is a lot of woodland here, some beech, some conifer plantation, on chalky, flinty soil, but it’s a bit popular for my liking.  You’ll find all of the standard Chiltern woodland species, but I’ve never found anything really amazing, despite its potential.  Maybe it’s just me.

A quiet, damp woodland with a stream draining down to a sinkhole…always fun.  I found some really good stuff here including Orthotrichum pallens and Plagiothecium latebricola, which are both scarce in Bucks.

Starting from the village, work your way slowly down Holloway Lane to SU750919, looking out for Mnium stellare as you browse the mossy goodness at eye-level, like a bryological supermarket. Then head up into Idlecombe, Churchfield and Turville Woods for a wonderful day out in fine Chiltern woodlands.  You might imagine seeing Dawn French in a vicar’s outfit emerging from a lane to the sound of the Lord is my Shepherd – that’s because the Vicar of Dibley was filmed round here.  Take your eyes off the ground for a minute and look out across the valley – breathe in the air and watch the kites swooping about, and you’ll know why being in the countryside is so good for you.

This can be found on a number of old beech trees in Burnham Beeches.  Look around the rim of water-filled knot-holes or areas where water runs down from such holes. You can get your eye in at the base of a very nice old beech near the top of some steps at SU 94635 84498, but the species is quite widespread in the reserve. 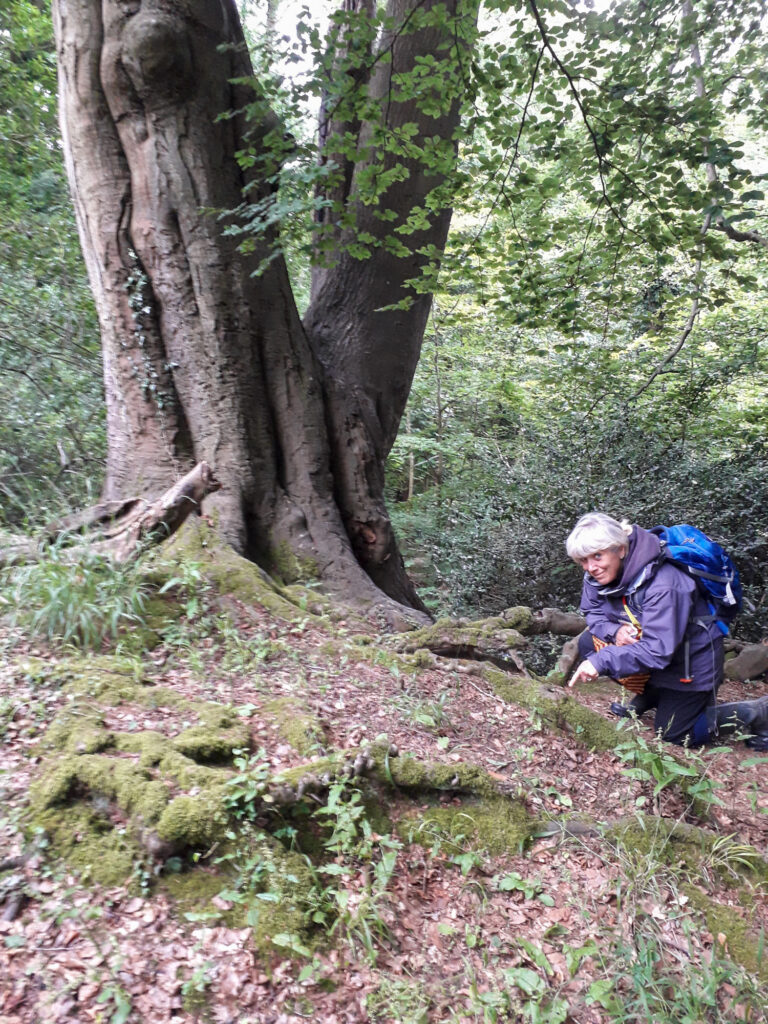 This moss is quite common on stony banks of the Thames, although uncommon nationally. You can separate it in the field from the more common Dialytrichia mucronata, as the leaves appear very tatty and broken up.

This can be found on a south-facing wall of Swanbourne church at SP80115 27283.  It looks like a shaggy Grimmia pulvinata, but with sessile capsules.  Please, please do not collect any – at the time of writing this is only known from one other site in Britain, so is an extreme rarity, and there is only a tiny patch or two. 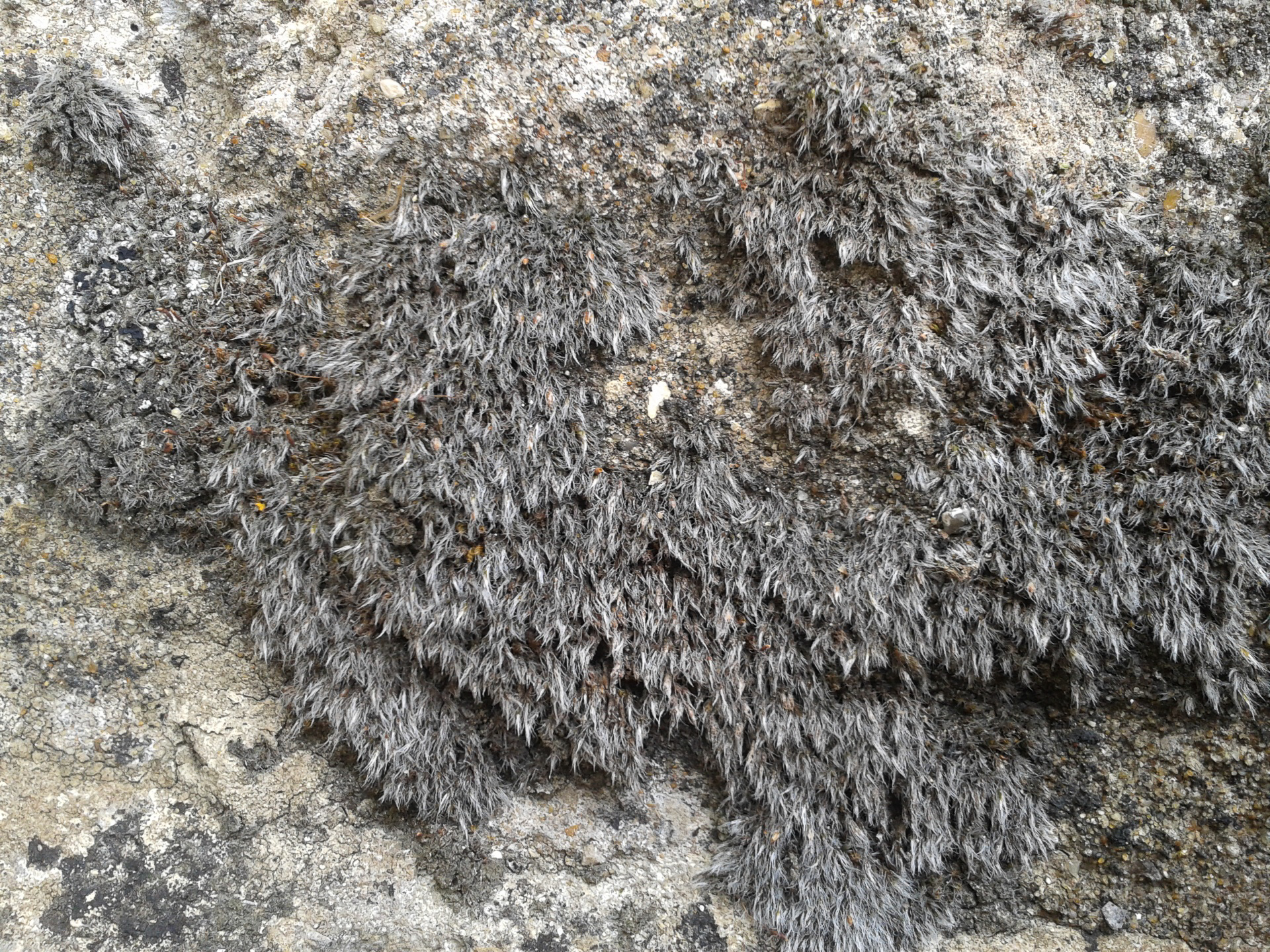 Grimmia crinita in situ on Swanbourne church wall – please do not touch!

This is fairly widespread in Bucks, on well-trodden paths, often slightly shaded, by disused canal sides or forest tracks, for example.  It is so easily overlooked as something boring, that I suspect it is even commoner than I think.  Try the Grand Union Canal at Hydelane SP72681 35201

I love this moss, as it is sometimes considered to be quite scarce, but is in fact quite common in Bucks.  The problem is it looks so much like a dull Hypnum that you might overlook it.  It’s a question of getting your eye in for it.  Look on the sides of fallen logs, and you might see its tell-tale capsules poking out in large numbers.  I find it at least as often as not in nice old woodland in Bucks.  eg try Idlecombe Wood around SU74829 91503 where it is abundant.