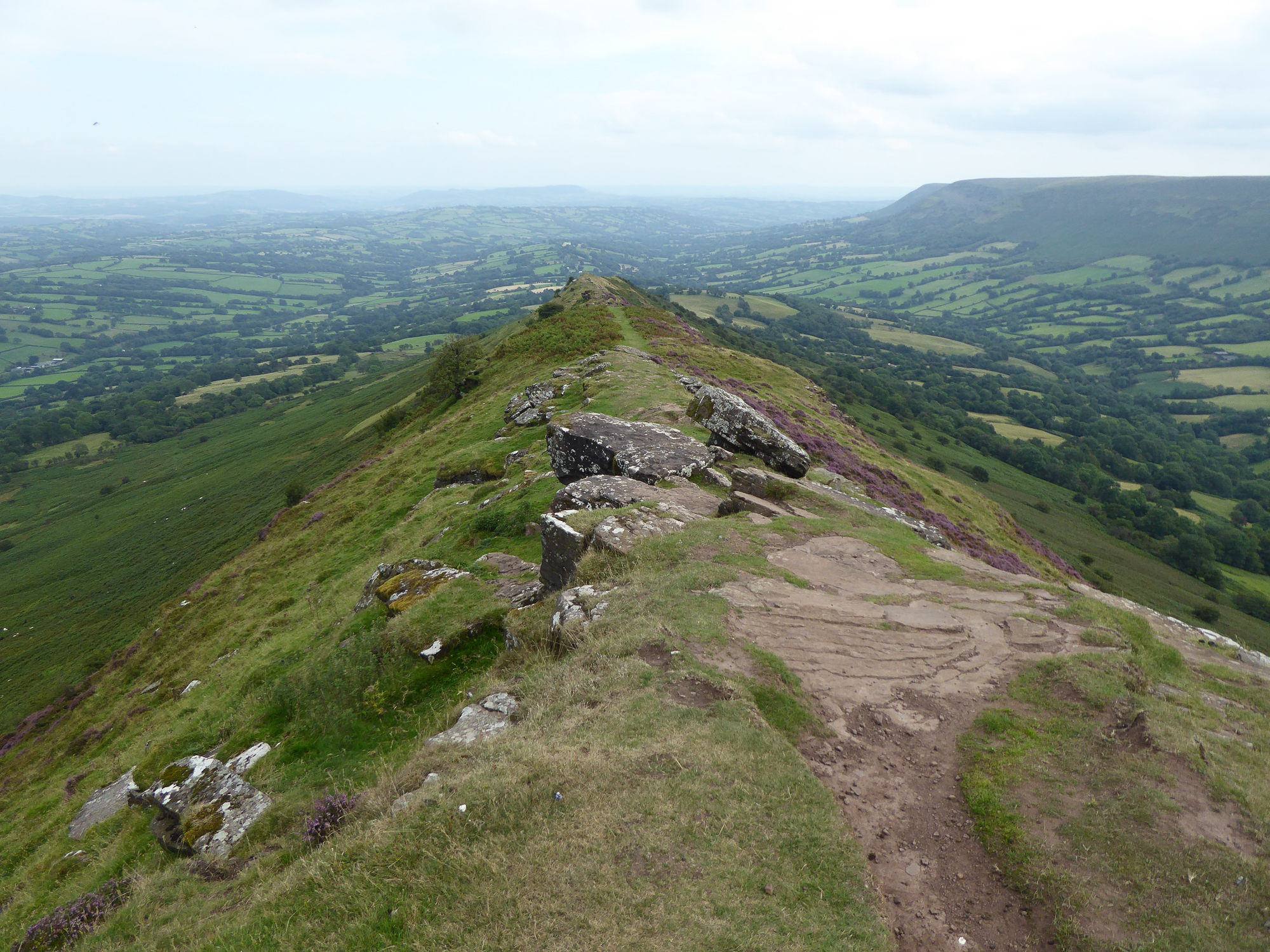 A bryological tour through Herefordshire

…with Jonathan Sleath (plus updates by Ian Draycott, December 2020)

In considering where to go in the county to find interesting bryophytes, it is useful to divide the county up by using the English Nature Natural Area classification. All of these areas contain public access land of potential interest to bryologists. 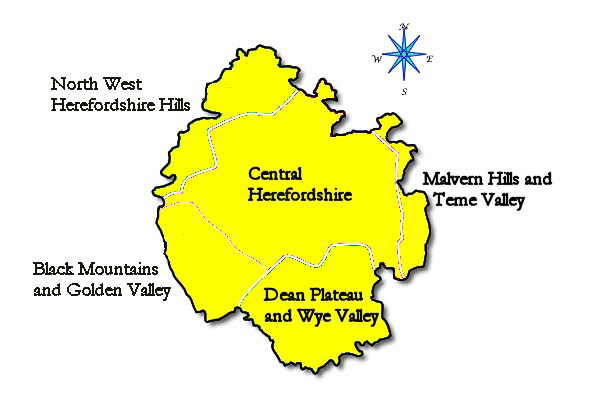 This is the largest and were it not for the river Wye would be certainly the least interesting of the areas. The bedrock is Devonian Old Red Sandstone that has been weathered down to generate the clay soils that sustain most of the agriculture in the county, within the broad floodplain of the river. There is a great deal of arable farming so there is no shortage of stubble fields to look at in the winter. The landscape is punctuated by hills which are often topped with a thin band of limestone known locally as cornstone. This sandstone is quite base rich so there are few really acid areas. Most of these hills support areas of oak and mixed deciduous woodland. A typical example can be found at Dinmore Hill.

This area is easily visited and there is a large car park at SO517515. The wood contains the usual assortment of common woodland bryophytes, and in Burghope valley on the southern flank you may find calcicoles such as Campylophyllopsis calcareum, Eucladium verticillatum, Taxiphyllum wissgrillii and Mesoptychia turbinata. This area has generated the most records for Fossombronia in the county, including F.pusilla and F.caespitiformis.

The entire Wye is an SSSI, and is always rewarding to explore, although access can be a problem. Hennediella stanfordensis has now spread along most of the river systems in the county, and is a common plant on the silty banks. In this habitat you may also come across an interesting Bryum whose taxonomic status is controversial. It has about 5 – 7 bulbils in each leaf axil and otherwise looks like Bryum dichotomum (B.bicolor). On the continent it would be termed B.barnesii but at present we do not recognize the taxon in this country, although it is very distinctive. There are also old records for Epipterygium tozeri here. Orthotrichum rivulare occurs frequently on riverside trees, often with O.sprucei. Further down towards the water on the bark of trees, Syntrichia latifolia and Leskea polycarpa are often abundant. A good access point is at Bredwardine SO336447. On exposed tree roots at the waters edge you may be fortunate to find the rare Myrinia pulvinata, although it can be hard to spot being encrusted in silt. If you ask the farmer at Old Court he may let you walk up to the bend of the river at SO338454 where there is a reliable patch, but please do not collect it. It also grows at Bridge Sollers SO413425 on a tree on the SW bank, but I have never found it downstream of this point. Scleropodium cespitans is quite frequent on trees all along the Wye, and Schistidium rivulare turns up on rocks at the water’s edge.

This area includes the main limestone localities in the county at the Silurian inlier known as the Woolhope dome and the carboniferous limestone of the Symond’s Yat area, especially the Doward.

The Woolhope Dome consists of a series of limestone ridges forming hills, with valleys in between formed by weathered shale. A popular place for walking is Haugh Wood SO593365 which is in fact quite acid in places. There are tiny patches of bog at SO587361 and SO595366 with Sphagnum fimbriatum, S.subnitens, S.palustre and Bryum bornholmense. Ptilidium pulcherrimum grows in some places. More typical limestone habitats include Backbury Camp which is reached by the track that leaves the road at SO 581385. Cololejeunea rossettiana occurs in the woodland here, and there are records of Weissia rutilans and Entosthodon fascicularis. Common Hill (park at SO 590348) is a locus classicus for Pottiopsis caespitosa, which has so far eluded the author. Other plants include Acaulon muticum, Aloina aloides, Didymodon acutus, Microbryum curvicolle, Microbryum rectum, Racomitrium canescens and Tortula lindbergii (Tortula lanceola). There are quite a number of Herefordshire Wildlife Trust reserves in this area including Lea & Paget’s Wood (SO 396344) and Nupend Wood (SO 581352), both of which contain old quarries supporting common calcicoles.

The area is quite extensive and you will have to be selective where you visit. The best starting place is the Lords Wood Biblins car park at SO 548157 From here you can either walk south to the river or west past King Arthur’s Cave HWT nature reserve and up to Little Doward.  Alternatively walking east will take you past some bryophyte rich old stone walls towards the limestone cliffs above Symonds Yat West. Look out for Gymnostomum viridulum in the old quarry by the car park. The locality for Anomodon longifolius is on the opposite side of the river just over the county border and remains to be refound in Herefordshire. However, some scarcities persist including Metzgeria pubescens and Serpoleskea confervoides. It is worthwhile including a visit to the Dropping Wells SO551145 which are a series of huge tufa boulders formed where the lime rich water emerges at the base of the valley. Of particular interest here is Gymnostomum calcareum. Other plants you might be fortunate enough to come across in the Doward include Eurhynchium striatulum, E.schleicheri, Mnium marginatum, Marchesinia mackaii and Porella arboris-vitae. Unfortunately, Rhytidium rugosum and Bryum canariense have not been seen for a long time.

These hills are much more acid and include Chase Wood (access from the end of the road at SO601288) and Penyard Park (access from Weston-under-Penyard (SO631232)m Coppet Hill and Huntsham Hill. They are really outliers of the Forest of Dean. There are records of Myriocoleopsis minutissima (Cololejeunea minutissima), Campylopus fragilis and older records of Cynodontium bruntonii, Dicranum fuscescens, and even Harpanthus scutatus. A lot of the rock outcrops previously exposed may now be heavily shaded by plantations.

In the west of the county, towards the border with Wales, the sandstone hills and ridges of the Golden Valley become steeper and higher as they merge with the Black Mountains. The border runs along the crest of Hatterrall Hill, and permits the inclusion of the Olchon Valley and the Black Hill within Herefordshire, which provide some excellent upland localities and scenery. There is much less arable agriculture and more sheep farming. Many of the churches and farm buildings in this part of the county have roofs constructed using tiles quarried from the local sandstone. Where they face south they support an interesting community of thermophilic mosses including Grimmia ovalis, G.laevigata and Hedwigia ciliata var ciliata. A good example can be seen at Dore Abbey (SO387304), where Leucodon sciuroides is also common.

Park at SO 273338 and follow the Olchon Brook upstream. In addition to most of the species listed above there is Hyocomium armoricum, Plagiobryum zieri, Pseudohygrohypnum eugyrium, Sphenolobus minutus, Mesoptychia collaris (Leiocolea alpestris), Mylia taylorii and Scapania uliginosa. There are old records of Bryum mildeanum, although recent attempts to re-find it have not been successful. This really is a wonderful place for the Herefordshire bryologist weary of lowland species.

The high point of the most easterly of the Golden Valley ridges can be reached following a short walk after leaving the car at SO 310440. Dicranum bonjeanii grows in the moorland here, and there are some damp flushes with Sphagnum denticulatum. Exposed rock near the trig point has Racomitrium aciculare, Racomitrium aquaticum and Ptilidium ciliare, with Lophozia excisa nearby. Lejeunea cavifolia is found in the wood.

This area is characterised by dingles, which are narrow steep wooded valleys cut into the sandstone of this more upland part of the county. Two of these are Herefordshire Nature Trust Reserves: Brilley Green Dingle (SO274487) and Holywell Dingle (SO310512). Mnium stellare is found in both, and is not infrequent in NW Herefordshire. Holywell Dingle also has Orthocaulis attenuatus.

The nearby Croft Estate is owned by the National Trust, and access here is much easier. Bircher Common (SO46-66-) has some interesting plants that include Blindiadelphus recurvatus (Seligeria recurvata), Blasia pusilla and Trichocolea tomentella. Neckera pumila and Pohlia lutescens have been recorded from the nearby Leinthall Common (SO44-66-), and Dicranum montanum, Frullania tamarisci, Metzgeria temperata and Microlejeunea ulicina are found in the shelter of Fishpool Valley (SO45-66). Nearby, although strictly speaking just outside this natural area, the river Teme meanders over the Old Red Sandstone on its way down from Ludlow, and just inside the county boundary at a bridge at Brimfield (SO537687) you can pay your respects to Cinclidotus riparius. At Brimfield Common (SO 52-66) there is Rhodobryum roseum growing on some old ant hills, at one of its very few Herefordshire localities.

Nash Scar and Woods (SO30-62-) form an important locality and are worth a discreet visit to inspect particularly some of the exposed base rich rocks. Campylium chrysophyllum, Grimmia orbicularis, Gymnostomum viridulum, Tortella nitida, Weissia brachycarpa var. obliqua, Cephalozia lunulifolia and Scapania irrigua are all worthy of note. Old records exist for Brachythecium glareosum, Didymodon acutus, D. ferrugineus, and Thuidium philibertii.

The Herefordshire part of this area really just includes the acidic ancient igneous rocks of the Malvern Hills, together with some more calcareous areas of Silurian limestone to the north and east. This region is not well known bryologically.

Cother Wood, West Malvern (SO 758462) is an ancient wood with old limestone quarries and some adjacent limestone grassland that has yielded Hypnum lacunosum, Mesoptychia turbinata and Lejeunea cavifolia. This is another HNT reserve. Park at SO761462 then walk to the west past Croft Farm. There is an old record of Cephaloziella turneri from the nearby Rough Hill Wood (SO75-48-).

The Malvern Hills themselves are mainly covered with acid grassland, but there are a number of old quarries. It is mostly all open to the public as it is a very popular recreational area. The area between The Gullet and Midsummer Hill is worth a visit. Plants you may come across here include Climacium dendroides, Cynodontium bruntonii, Dicranum tauricum, Tritomaria quinquedentata and Ptilidium ciliare.

I am grateful to Mark Lawley for his comments on the draft, and in particular to sharing his knowledge of some of the localities in the north of the county.