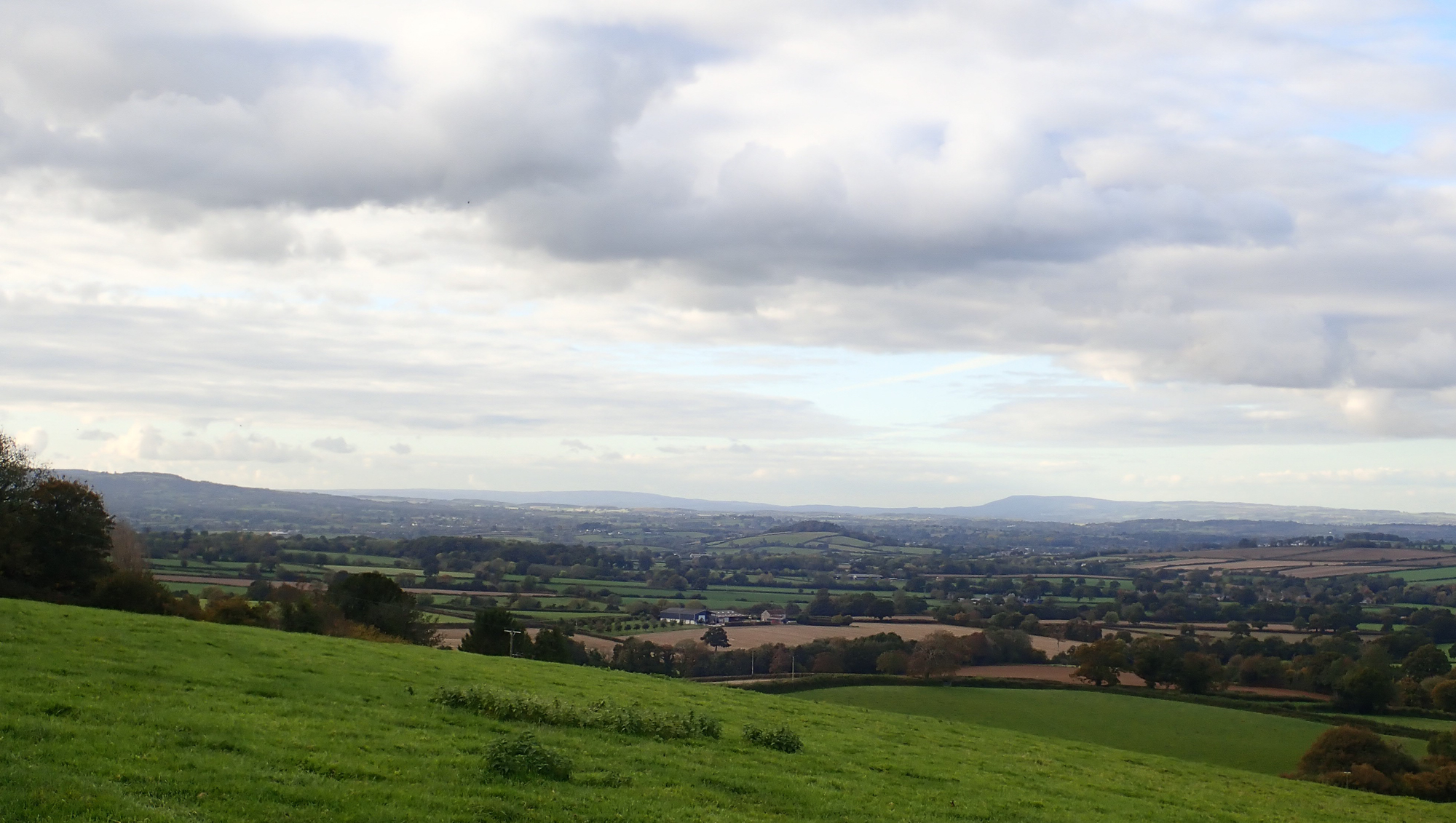 View north across South Somerset from near Crewkerne, with the Blackdown Hills on the left, Exmoor in the distant centre and the Quantocks to the right

South Somerset stretches in the east from the village of Cucklington, on the border with Dorset to the heart of Exmoor in the west, where it meets North Devon, a distance of approximately 105 kilometres. The vice-county has been described as looking rather like the body of a snail, with North Somerset (VC6), the shell. In essence VC5 is the part of Somerset west of the River Parrett and south of the A303. The vice-county covers a wide range of landscapes from relatively low-lying agricultural land around the southern edge of the Somerset Levels, dominated by dairy-farming, to the moors and wooded river valleys of Exmoor in the west. There are also the upland areas of the Blackdown Hills in the south-west, the Quantocks west of Bridgwater and the Brendon Hills north of Taunton. The surface geology of the county is dominated by sandstones and shales in the west and alluvial deposits across the Somerset Levels. In the south of the county there is a line of greensand hills. The coast, which borders the Bristol Channel, has some spectacular cliffs, particularly west of Minehead some of which rise more than 300m above the sea. Farther to the east there are eroding low cliffs of Blue Lias, such as at Blue Anchor. At the entrance to the River Parrett, are extensive areas of grazing marsh, mudflats and shingle.

The bryophytes of the vice-county until recently have not been systematically surveyed and indeed there has never been a Flora. Some important recording was done by Joan Appleyard and Jean Paton in the 1960s and 1970s. Irene Perry of the Exmoor Natural History Society produced a Bryophyte Atlas of Exmoor in the 1990s. Visiting bryologists have made important records and over the decades several BBS meetings in the region have included excursions in VC5. In recent years Andrew Branson and Sharon Pilkington have made a start on recording the county for a Flora which will cover both South and North Somerset (VC6). This work has involved mapping mostly at a 1km (monad) level for a tetrad-based atlas and this is gradually revealing what a rich and varied county parts of Somerset remain for bryophytes.

Key regions within the county for bryophytes

The bulk of this National Park is within Somerset and it contains some of the richest sites for bryophytes in the county. The River Barle west of Dulverton has a particularly exciting mix of riverside woodland with rocky outcrops. Nationally Scarce and Regionally Rare species such as Jamesoniella autumnalis, Lepidozia cupressina, and Porella pinnata can be found here, as well as a rich Atlantic flora, including such species as Isothecium holtii, Plagiochila punctata, P. spinulosa and Saccogyna viticulosa. The river itself also has important populations of Fontinalis squamosa and Platyhypnidium lusitanicum, with Orthotrichum rivulare growing on overhanging trees. A good area to explore along this stretch of the Barle is at Tarr Steps (SS867321). The National Trust Holnicote estate, near Porlock, contains some excellent habitat, particularly at Horner Wood. The East Water valley below Cloutsham has a fine assemblage of species including good populations of Lepidozia cupressina on fallen oaks (car park at SS902438). Farther west, near Simonsbath, some of the headwater streams have important flushed habitats on their valley sides, supporting some recently discovered northern species such as Nardia compressa, Sphagnum contortum, Sphagnum teres, Oligotrichum hercynicum and Scorpidium cossonii. Some of the mires in this region support up to ten Sphagnum species, but extensive areas of upland habitat have been substantially degraded and are species poor. 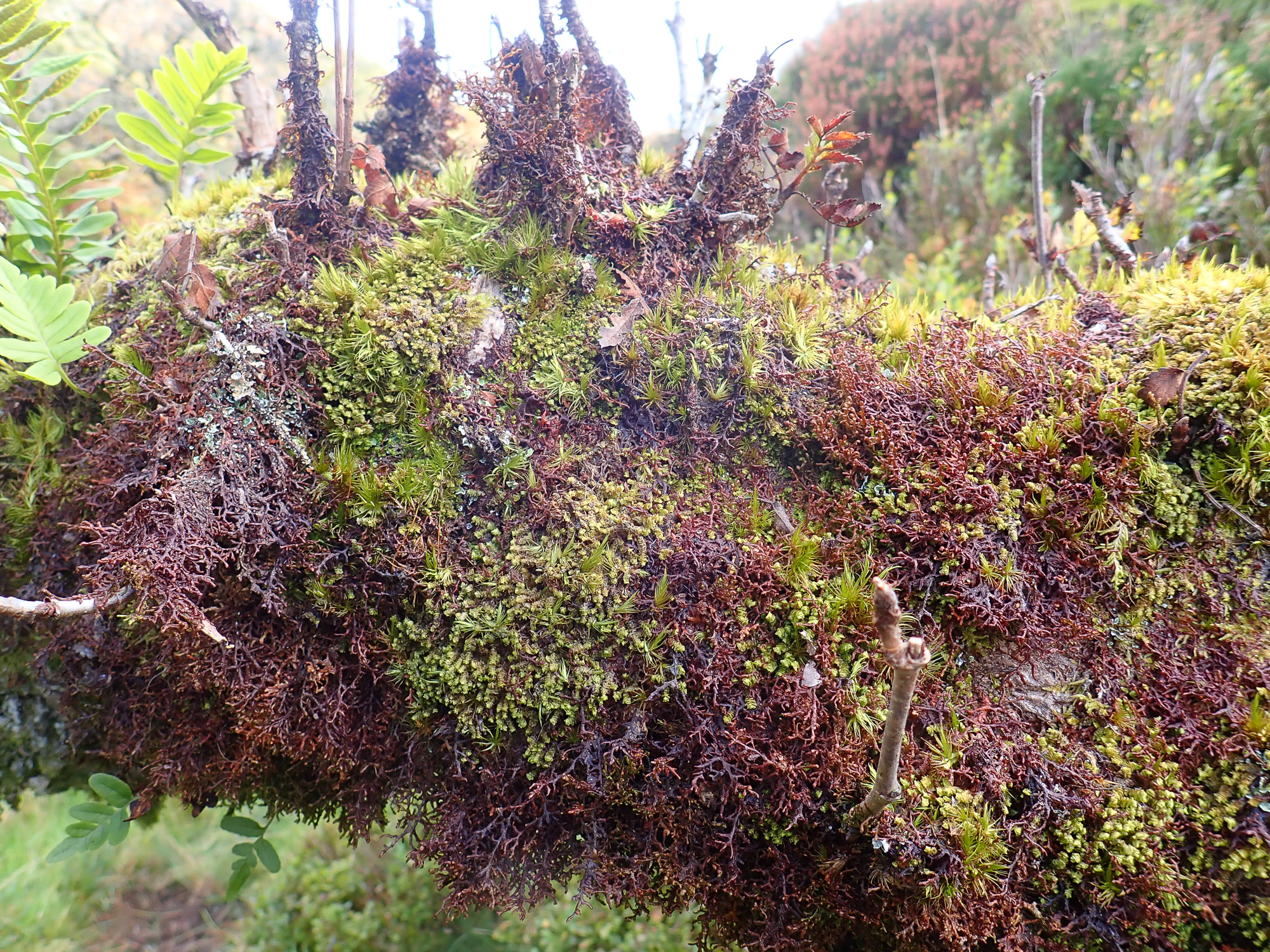 A branch of a Rowan near Nutscale Reservoir in Exmoor covered in bryophytes, including Frullania tamarisci, Scapania gracilis and Dicranum scoparium.

The Quantocks, west of Bridgwater have some of excellent habitat, such as the wooded valleys at Hodder and Holford Combe. Here there is Sphagnum quinquefarium on steep banks amongst luxuriant Rhytidiadelphus loreus and Racomitriums on boulders in the streams, with Hyocomium armoricum on the adjoining banks. Plagiochila spinulosa grows in a deep combe. Further south, Aisholt Common has a good flora, with Lophocolea fragrans on shaded stones and hornworts by a stream.

The Blackdown Hills has a more intimate mix of small fields and woods than Exmoor, with good patches of wet heath and mire. An interesting area to explore is the northern ridge of the hills around Staple Hill with its extensive footpaths (car park at ST246160). Flushes in the area can contain many Sphagnum species, including the Nationally Scarce S. subsecundum, as well as some ‘brown moss’ base-rich communities. Nearby sites also worth exploring are Priors Park, Adcombe Wood and Yarty Moor.

Large areas of the southern and eastern part of South Somerset are dominated by intensive dairy and livestock farming, with many fields given over to maize and silage crops. This hyper-eutrophic landscape is very unproductive for bryophytes, but some good areas still remain. The Greensand hills near Corton Denham have a good flora in places with species such as Epipterygium tozeri and Pohlia annotina and the Nationally Scarce Tortula schimperi on eroded banks. A varied geology west of Crewkerne on the ‘Yeovil Scarplands’ provides a mixture of acid and calcareous communities. Most of the Somerset Levels are again intensively farmed and rather monotonous for bryophytes, but some of the hedgerows have Leptodon smithii growing in their humid interiors and the wetter fields are proving good places to find Hygroamblystegium humile. The village churches and churchyards are, however, sometimes the most interesting places to search, with species such as Scorpiurium circinatum proving to be present in nearly all the churchyards near Yeovil.

The Exmoor stretch of the South Somerset coast has some excellent north-facing woodlands, such as Embelle and Culborne and Yearnor Woods, where Jubula hutchinsiae and Fissidens rivularis can be found in and by streams making their way down to the sea. Bossington Head has a good range of coastal bryophytes including Tortula viridifolia, Tortella flavovirens and Scleropodium touretii. Wall and Catsford Commons, near the Parrett estuary, have a scattered upper saltmarsh bryophyte community including Hennediella heimii, Tortula modica and Tortella flavovirens, here growing on decaying reed stems.

There are few large areas of open water in the county, but the reservoir at Sutton Bingham, near Yeovil, and those on the edge of Exmoor at Clatworthy and Wimbleball have interesting floras along their drawdown zones, with good populations of Riccia cavernosa, Aphanorrhegma patens and Ephemerum sessile present in dry autumns.

For more information on activities in South Somerset and adjoining counties visit www.wessexbryologygroup.org.