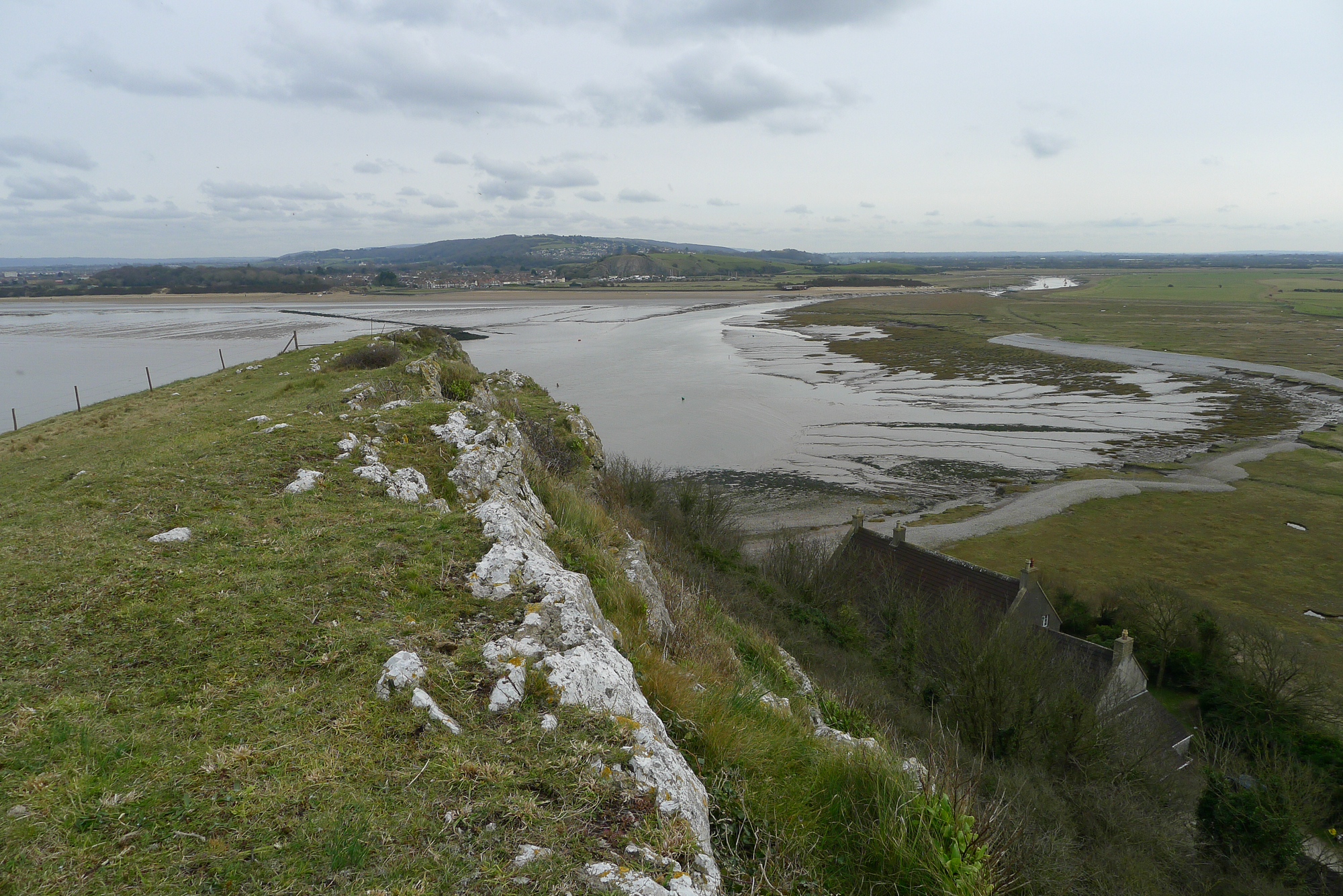 Brean Down, looking inland, taken in February 2016 during a successful hunt for Weissia levieri.

Much of the bryological appeal of North Somerset lies in semi-natural habitats associated with its distinct ranges of low hills; the extensive Carboniferous limestone of the Mendip Hills in the north, with its classic gorges and combes, the arc of the Polden Hills further south, and the sandstone rise of the Stourhead ridge on the border of Wiltshire to the east. These hills are relatively low, with the highest point at Beacon Batch, Black Down (325 m). Springs rising from the limestone aquifers feed the extensive wetlands of the Somerset Levels between the hills, but these are better known for their birds than their bryophytes. Unfortunately, much of the low-lying land is either dairy or intensively arable and is bryologically dull.

The mild climate of North Somerset attracts some rare southern species, including some at the northern limit of their range in Britain. The climate is not quite as wet as Wales, but airborne pollution is low and epiphytic species often abound.

The Mendip Hills are an extensive Carboniferous limestone plateau incised by deep gorges and steep-sided valleys, known locally as combes. Many of these are rich in bryophyte habitats including unimproved limestone grassland, rock exposures, drystone walls and ancient Ash woodland. Patches of wind-blown glacial dust, known as loess, form acid caps locally, increasing the diversity of species to be found.

Cheddar Gorge is of course a well-known tourist destination, but few tourists venture beyond the shops and cafés of the lower gorge. More than 160 bryophyte species have been recorded from the gorge, making it one of the richest sites in North Somerset. Much of the gorge is aligned along an east-west axis and the south-facing side supports many species of thin, sun-baked soil, including Bryum canariense, B. kunzei and Tortella squarrosa. Populations of Entosthodon muhlenbergii and E. pulchellus are occasional on disturbed soil over rocks. Other species prefer more sheltered and/or shaded habitat and Plasteurhynchium striatulum, Scorpiurium circinatum and Marchesinia mackaii are abundant in such places, especially in the lower end of the gorge. In open woodland and scrub, Amblystegium confervoides is sometimes to be found on loose stones on the ground whereas Cololejeunea rossettiana prefers sheltered rock faces in woodland, where it is frequently epiphytic on Thamnobryum alopecurum. Seligeria pusilla can be found in dark crevices. At the top of the gorge there is one of the only tracts of north-facing limestone grassland in North Somerset (the remainder having succeeded to woodland) and here Loeskeobryum brevirostre and Hylocomium splendens grow in the turf.

For anyone wishing to look at the bryophytes of the gorge, there are plenty of free laybys at the upper end. The valley of Black Rock (ST4854) is a good place to start, parking in a layby at Blackrock Gate ST482545. The valley itself offers much of interest to the bryologist although it can be remarkably busy with walkers. Alternatively, the sure-footed bryologist can park further down the gorge opposite a covered reservoir at ST474544 and explore the steep south-facing slopes adjacent.

Many of the same species can be found at Burrington Combe (ST4758, ST4858) on the northern side of the Mendip plateau. On its lower slopes the sharp-eyed can also find Gymnostomum viridulum and Grimmia orbicularis if they are lucky. Two streams drain from the high sandstone hill of Black Down into the combe and these provide habitat for locally rare oceanic species including Hyocomium armoricum and Saccogyna viticulosa. Boggy ground around the springheads is home to several species of Sphagnum and Colura calyptrifolia, a species now not uncommon on the high ground of the Mendip plateau. 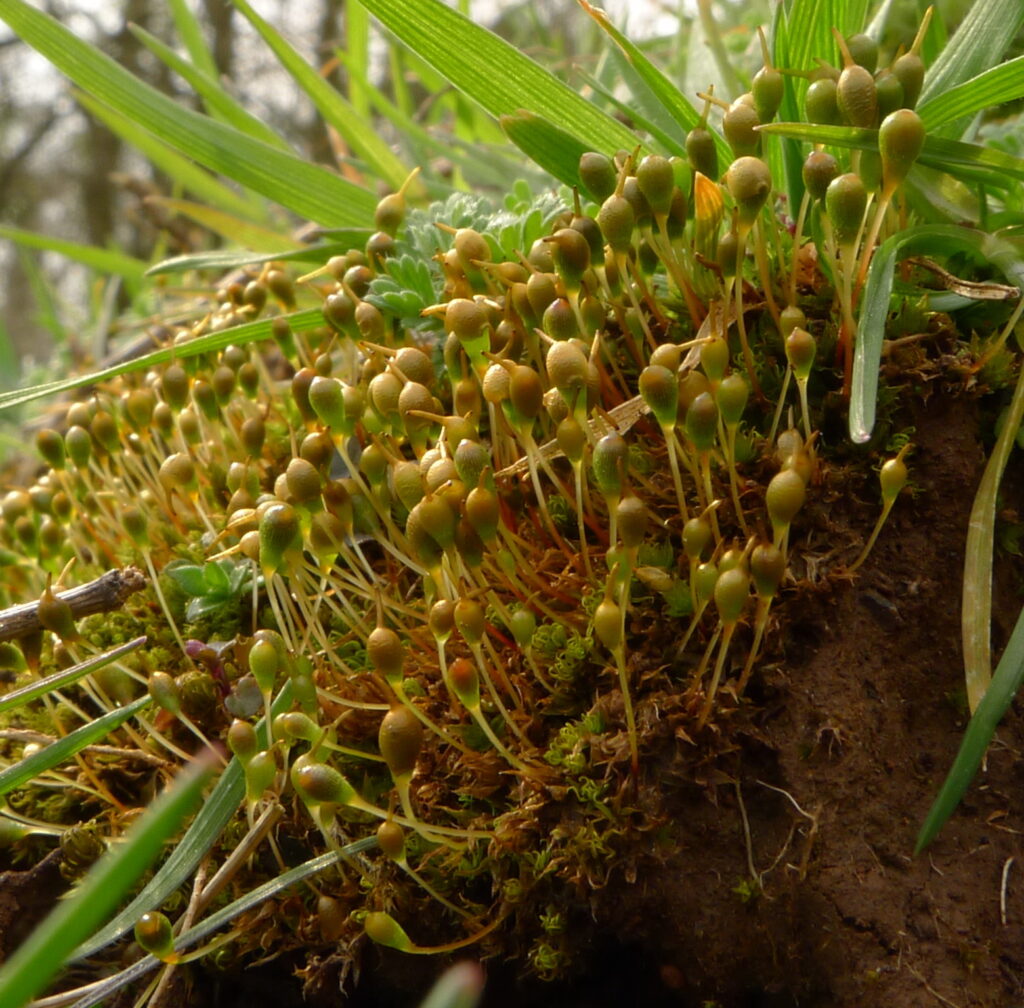 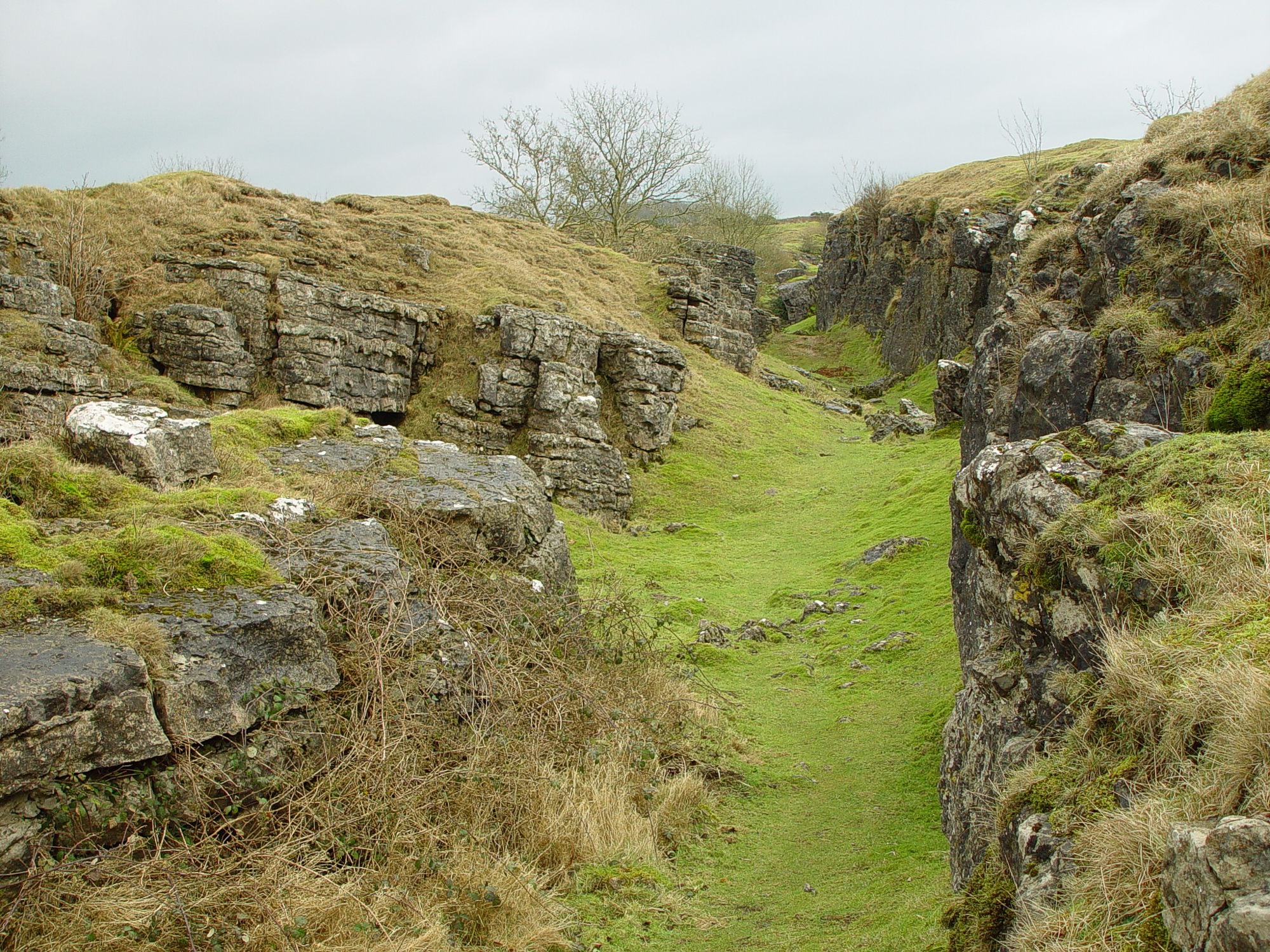 Ubley Warren, a former lead mine which is now a nature reserve, taken in 2005

Mendip’s disused lead workings offer rich pickings for bryologists. Blackmoor, a Somerset Wildlife Trust nature reserve (ST5055, ST5056), is home to species not found anywhere else in Somerset, including a large population of Grimmia donniana on lead-rich slag boulders. Metalliferous waste tips are home to Ptychomitrium polyphyllum, small liverworts like Cephalozia stellulifera and Lophozia excisa and a substantial population of Bryoerythrophyllum ferruginascens. This small moss, normally regarded as a resident of upland districts, was first discovered in Somerset in 2012 and has since been found to be quite common in the Mendip Hills. It is however usually diminutive and is easy to overlook.

Plagiomnium ellipticum can be found in pools and willow carr supports many epiphytes, including Ulota calvescens, Colura calyptrifolia and Orthotrichum striatum, a species that is increasingly frequent in the vice-county. Other lead workings nearby, now known as Priddy Mineries (ST5450, ST5451) also have pools with P. ellipticum as well as Calliergon cordifolium and various common species of Sphagnum. Priddy Mineries and the adjacent Stockhill Plantation (ST5551 and adjacent monads) also have a population of the rare (and tiny) Ditrichum plumbicola, a specialist of bare, lead-rich ground where little else grows.

The only population of Rhytidium rugosum in southern England grows in gruffy ground (consolidated soil from mine workings) at Ubley Warren Reserve (ST5055) which is next to Blackmoor and shares the same small free car park at ST504556. The most visible mining remains are a number of vertical-walled cuttings several metres into the limestone bedrock, known as rakes, where lead veins running close to the surface have been excavated. A woodland flora dominated by Neckera crispa dominates some of these and they support numerous species. Climacium dendroides is common and Acaulon muticum, Gymnostomum aeruginosum and Didymodon ferrugineus have all been found. Some of the gruffy ground is quite acidic and there are heathy areas where Hylocomium splendens and Pleurozium schreberi abound.

Less well known than the Mendip Hills, the Polden Hills stretch above the Levels in a narrow arc from Somerton to Bridgwater. Geologically, they are of Jurassic to Triassic age and are formed of soft Blue Lias limestone interbedded with clays. Though they are mostly less than 100m high, they are steep-sided and have large areas of unimproved calcareous grassland on scarp slopes and mature or veteran ash woodland on the plateau.

The Polden ridge between Street and Somerton is of great importance for bryophytes. Grazing of calcareous grassland on its slopes for the benefit of the Large Blue Phengaris arion is often undertaken by rare breed sheep and cattle and there has also been much clearance of invading scrub and secondary woodland. Places such as New Hill (ST4931), Gilling Down (ST4932) and Hatch Hill (ST4933) have rich communities of calcicoles which include Entodon concinnus, Thuidium assimile and Weissia controversa var. crispata. Hylocomium splendens and Rhytidiadelphus triquetrus sometimes form luxuriant mixed turfs on the most sheltered turfs. A bryologist visiting in late winter stands a good chance of finding number of small winter ephemerals, including Tortula lanceola, Ephemerum recurvifolium and locally, Pottiopsis caespitosa and Pterygoneurum ovatum.

In 2013, Pterygoneurum papillosum was found in the Polden Hills and is now known from a few scattered localities there on sheep-grazed downland, where it occupies a very particular kind of microhabitat.

Although the Polden woodlands are less interesting bryologically, Leptodon smithii is not uncommon in places, especially on the south-facing scarp at Ivy Thorn Hill (ST4734, ST4834). Sematophyllum substrumulosum can also be found on decaying felled conifers in the Combe Hill area (ST5033). 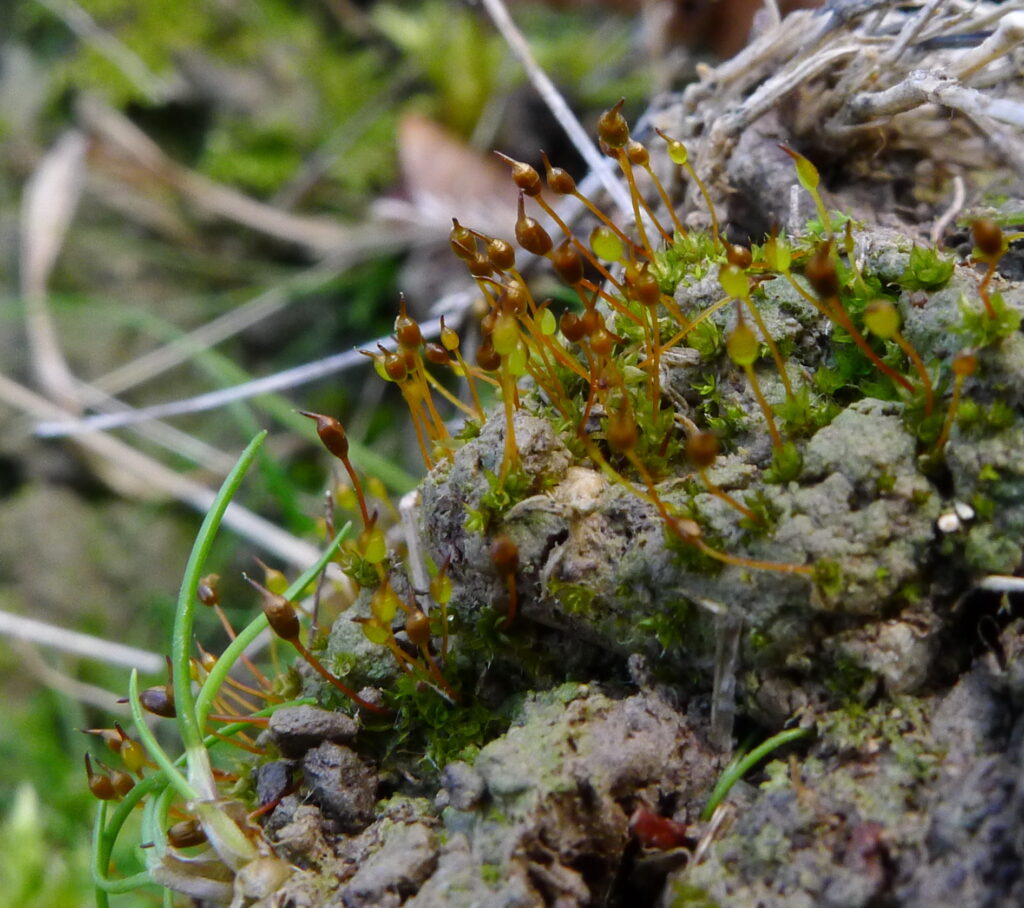 The North Somerset coastline is blessed with some special sites for bryophytes. Middle Hope is a Carboniferous limestone peninsula sticking out into the Bristol Channel north of Weston-super-Mare (ST3266 and others). It is best known for its large population of Cheilothela chloropus, a rare Mediterranean-Atlantic moss in Britain known only from a few coastal localities in Somerset and Devon.

Brean Down, a similar limestone peninsula south of Weston-super-Mare, is well known for its rare vascular plants, though less so for its bryophytes, whose richness rivals that of Middle Hope. Many of the same species can be found, though inexplicably, C. chloropus has never been found there. As well as good populations of W. levieri, which confusingly often grows in the same places as Weissia longifolia, it is a good place to look for Entosthodon pulchellus and E. muhlenbergii. It is also the only place in N. Somerset where the rare Tortula wilsonii has been found. Brean Down is easily accessed from a small beach car park at ST296586.

Chew Valley Lake (ST5760 and others) and Blagdon Lake (ST5159 and others) are both important sites for reservoir margin specialists and a visit in the autumn months when water levels are low will usually yield Riccia cavernosa, which grows in huge numbers on damp mud alongside Aphanorrhegma patens. Bryum klinggraeffii and Hygroamblystegium humile are also typical of these habitats. Pylaisia polyantha and Leucodon sciuroides can also sometimes be found on epiphyte-rich willows growing around the lake margins. Blagdon Lake is more accessible to the bryologist, from a public footpath along its northern-western shoreline from Blagdon Lane at ST504603.

Since 2015, Andrew Branson (Regional Recorder, South Somerset) and Sharon Pilkington have systematically been recording across Somerset for a new county-wide flora. As a result of this work, many new species have been added to the vice-county lists and a picture has been emerging of a highly dynamic bryophyte flora.

Anybody interested in the bryophytes of North Somerset might wish to join some of the activities of the Wessex Bryology Group, a Local Group of the BBS, which promotes the understanding, recording and conservation of bryophytes in North Somerset and the Wessex area more generally. The group has a website with information about forthcoming meetings and activities.