Ayrshire (VC75) encompasses a large area in the south west of Scotland which is covered by North, East and South Ayrshire councils. As with a large proportion of regions in the UK, bryophytes are an under recorded group in Ayrshire. With recent recording work however, the species list for the county and their distribution within it are becoming a lot more respectable. This is illustrated best by the total number of records in VC 75 prior to the year 2000 stood at 1871, whereas as I write this now, the total number of records exceeds 22,000.

VC75 covers a very large area and is covered by North, East and South Ayrshire council districts. North Ayrshire is dominated by small hills covered in peatland which grades into farmland (predominantly grazing) at lower altitudes. The coast is predominantly old red sandstone but does has a few basalt intrusions in places. However, the greatest bryological diversity can be found within the deeply incised wooded ravines that are common along the coastal areas in the region.

East Ayrshire covers much of the central part of the VC 75 and is rather flat and dominated by pastoral farmland, blanket and raised bogs. Large expanses of East Ayrshire were used for coal mining with many of these as opencast surface mines. Since the liquidation of Scottish coal, huge areas of unrestored opencast coal mines were left unrestored, these now dominate much of East Ayrshires landscape.

South Ayrshire has a diverse and interesting range of habitats. In the far south of the council area, the southern uplands dominate much of the landscape and form large, remote hills covered in peatlands with occasional crags and north facing corries. Nearer to the coast, the geology is a mixture of base rich basalt and serpentine bedrock. This produces some calcareous habitats which are rather rare in the vice county and provides a welcome range of calcicolous species which are otherwise rare in the vice county.

Recording work towards a county flora is being carried out, the focus is on tetrad recording and re-finding old rare and scarce records. Targeted recording is normally carried out at a tetrad level, though most records are assigned to at least monad level.

This is a prominent hill slightly inland to the north east of Ballantrae. There is much exposed rock to explore which is primarily basalt which is slightly base rich in places. The most notable species to be recorded from the site is Grimmia dissimulata which was found on a mound of exposed rock to the west of the main hill. Other notable records in this area include Braunia imberbis (Hedwigia integrifolia), Grimmia decipiens, Grimmia lisae, Philonotis arnellii, Plagiochila killarniensis, Reboulia hemisphaerica, Frullania microphylla and Scapania aspera.

This hill which lies to the south west of Girvan is made of ultra-basic serpentine rock. The site is most notable for being the sole location for Grimmia sessitana in the UK. It has however not been re-found since its initial discovery in 1966 by Alan Stirling. There have been numerous attempts to re-find the species including a field trip by the BBS in 2009. While it may have been lost from the site, there is lots of ground to explore and places for the species to persist unnoticed.

Other than Grimmia sessitana, the site holds many other species to whet the bryologists appetite. It is an exceptional place for species such as Grimmia decipiens which can be found in large quantities throughout the south-east facing crags. Other Grimmia species are also well represented and include G. funalis, G. ramondii, G. torquata and G. donniana. Other species of interest include Frullania fragifolia, Frullania microphylla, Frullania teneriffae, Plagiochila killarniensis.

A little further to the south of a similar suite of species can be found to those found on the neighbouring Byne Hill, though they are encountered less frequently. In addition to many of the species listed for Byne Hill, additional species of note for Grey Hill include Grimmia muehlenbeckii and Dicranum spurium.

South Ayrshire borders Dumfries & Galloway along the hills in the southern uplands. Within the large hills there are some real treats to be found, though they are in very isolated locations which require long walks to reach. Herbertus hutchinsiae has a very restricted population within the north facing corrie set within Mulwharcher hill. Other species found within this area include species such as Bazzania tricrenata, Oedipodium griffithianum Odontoschisma elongatum, Cynodontium bruntonii and Campylopus atrovirens var. falcata can. 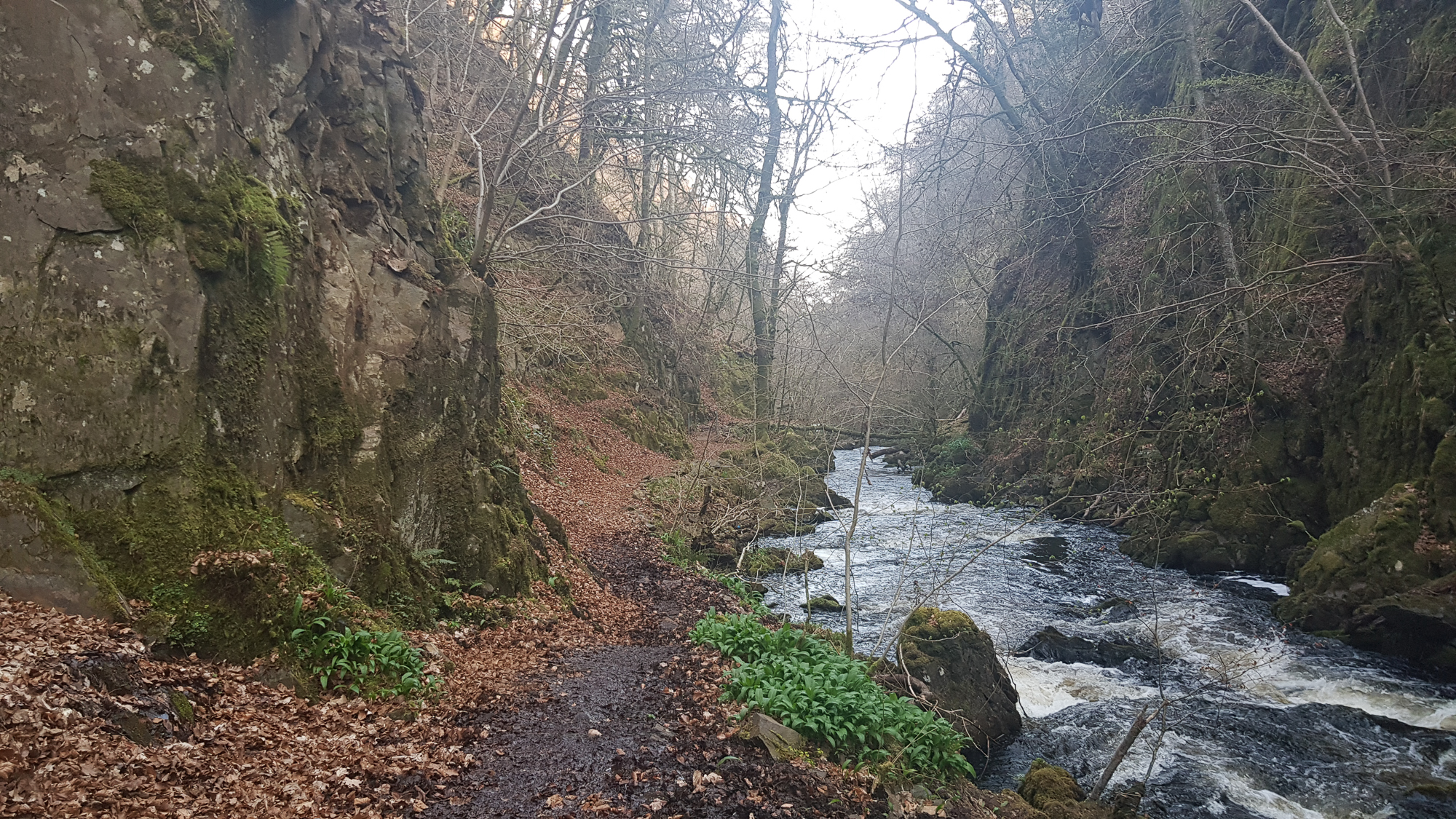 This site is one of the best sites in south west Scotland for oceanic bryophytes. Ness Glen is a Site of Special Scientific Interest (SSSI), where the bryophyte assemblage is listed as a qualifying feature. It is a deeply incised, wooded ravine where the water flows from Loch Doon in south Ayrshire. It is one of the few locations where a range of highly oceanic species can be found in one place in the region. Oceanic specialties include Cololejeunea microscopica (Aphanolejeunea microscopica,) Metzgeria leptoneura, Heterocladium wulfsbergii, Bartramia halleriana, Plagiochila punctata, Plagiochila exigua and Trichostomum hibernicum. An old record for Radula voluta was also made in Ness Glen, though it has never been re-found since its initial discovery.

This is a lowland raised bog that is managed by SWT and holds some regionally notable species. Most of the bryological interest at this site is mainly found on the raised bog itself where species such as Sphagnum austinii, Odontoschisma denudatum, Cephalozia connivens and Pleurozia purpurea can all be found. There are other habitats within the reserve such as lag fen and wet woodland which offer much diversity and many places to explore.

Glen Afton is located to the south of New Cumnock and contains a range of upland habitats to explore including block scree, cliffs and large rocky outcrops. Species that have been recorded within this area include large populations of Gymnomitrion alpinum (Marsupella alpina) on Craigbraneoch Hill, Amphidium lapponicum on the north side of Black Craig hill and Glyphomitrium daviesii in the block scree at Black Clint.

This site is a prominent volcanic plug that contains lots of places to explore including large cliffs, block scree and deciduous woodland. The most interesting places for exploring bryological interest is the large cliffs on the eastern side of the hill. These cliffs and many of the large boulders at the base of them contain a number notable species. These include Braunia imberbis (Hedwigia integrifolia), Grimmia donniana and Scapania compacta. Within the Block scree on the southern side of the hill contains frequent Kiaeria blyttii, Grimmia trichophylla s.s. and more Grimmia donniana. At the top of the hill near the western cliffs there is a population of Barbilophozia hatcheri, which is the only known population for the species within the vice county.

This is a site that was notable for Orthodontium gracile. Unfortunately, like many other of this species populations in the UK, it now seems to have been lost. The site is a deeply incised wooded glen that runs through old red sandstone. Despite the apparent loss of the O. gracile population, the site still provides a rich variety of species including Jubula hutchinsiae, Fissidens celticus, Lophocolea fragrans and Tetrodontium brownianum.

This is a mesotrophic loch which contains a nice suite of species, though make sure to bring wellies! The nationally scarce Hamatocaulis vernicosus is well represented within the loch and has several populations around the eastern end of the loch. Another nationally scarce species, Sphagnum riparium was recently recorded along the northern shore which is the only known location for the species within the vice county at the time of writing.

The coastal deciduous woodland which runs from Portencross in the south to Hunterston nuclear power station in the north is slightly oceanic in nature and offers plenty of habitat for the bryologist to explore. Species such as Marchesinia mackaii, Myriocoleopsis minutissima (Cololejeunea minutissima) and Lophocolea fragrans can be found, though their distribution within the woodland is quite restricted. Other species linked to the coastal habitats include Weissia perssonii, Tortella flavovirens and Hennediella heimii.