The following account of the project was written for the previous BBS website by Jennifer Rowntree of the Micropropagation Unit, Royal Botanic Gardens, Kew.

The importance and use of ex situ techniques in conservation has increased over the past decade, with the establishment of large projects such as the Millennium Seed Bank in the U.K. The increased use of ex situ techniques in conservation is thanks, in part, to their recognition in the Convention on Biodiversity (CBD), which was signed and ratified by the U.K. in the early 1990s. More recently, the Global Strategy for Plant Conservation contains specific targets for the ex situ conservation of threatened species.

Typical ex situ techniques might involve the creation of living collections (either in soil or tissue culture), or long-term storage collections (e.g. seed or spore banks, or in liquid nitrogen as a bank of cryopreserved material).

A project for the ex situ conservation of endangered U.K. bryophytes was launched in August 2000, at the Royal Botanic Gardens, Kew with the appointment of a dedicated bryophyte conservation officer. The initial project ran for three years and concentrated on the development of standard methods for the collection, sterilisation, tissue culture and cryopreservation of bryophytic material. Funding for the work was extended for a further three years in December 2003 and the current emphasis of the work is to expand the living and cryopreserved bryophyte collections. Methods for the introduction of specific species into their natural environments are also under development.

The project is a collaboration between the Royal Botanic Gardens , Kew and the UK statutory conservation agencies (English Nature, Scottish Natural Heritage, Countryside Council for Wales ). There is an emphasis on developing ex situ techniques as a complement to, and not a replacement for, in situ conservation efforts.

Collection of material for the project is only undertaken by authorised individuals and after consultation with the appropriate conservation agency and/or biodiversity action plan lead partners. Three protocols have been produced and circulated for the collection of a) desiccation tolerant mosses, b) desiccation intolerant mosses and leafy liverworts and c) thalloid liverworts and hornworts. The protocols emphasise the importance of limiting detrimental effects to the in situ populations and collecting representative genetic samples. Where possible the collection of sporophytes is preferred, but protocols have also been developed for the sterilisation and production of protonema from gametophores, thalli and gemmae alone.

Bryophytes are grown in axenic culture (without fungal, algal and bacterial contaminants) in the ex situ collection. Although artificial, axenic culture provides a more uniform and secure method of maintaining plants in a tissue culture collection. Axenic culture is also an advantage if plants are to be stored long-term in liquid nitrogen (cryopreserved) as they can be readily overwhelmed by contaminants during recovery. In addition, material guaranteed contaminant-free is easier to transport across international borders, and has advantages over non-axenic material for use in some genetic analyses.

Sterilisation protocols have been developed for a) sporophytes, b) leafy gametophores, c) gemmae and d) thallus tissue using the sterilising agent Sodium dichloroisocyanurate and without the addition of detergents. 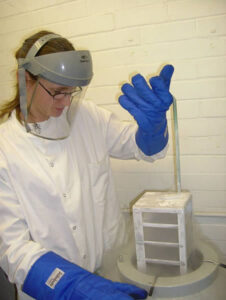 The ex situ project aims to provide long-term basal storage of rare bryophyte material for use in future conservation programmes. Material that is continually sub-cultured (as is necessary to maintain a tissue culture collection) is likely to become adapted to growing in culture conditions over time and thereby lose genetic diversity. This is particularly problematic for material retained for conservation purposes where reintroduction is a possible long-term objective. Cryopreservation is the storage of living material at -196 oC in liquid nitrogen and has been used successfully for the long-term storage of many different plants. Cryopreserved material is held in a state of suspended animation and therefore does not become adapted to growing in culture. A standard protocol has been developed for the cryopreservation and recovery of protonemal material and protocols are under development for leafy gametophores.

This article expands upon the summary above, and lists the species in the ex-situ collection at the time of publishing.

The further progress of the project – up until 2011 – can be downloaded from the Natural History Museum website.

Ex Situ Conservation at the Royal Botanic Gardens, Kew: Past, Present and Future