Two national Recorders are appointed by the BBS– one for mosses and one for liverworts. They are responsible for verifying and managing new vice-county records, as described below. The current Recorders are:

The BBS operates a vice-county recording system based on the vice-counties into which Britain and Ireland are divided for recording purposes.  The British vice-counties were originally defined by the Victorian naturalist HC Watson and are often termed ‘Watsonian’. The system provides a means of refereeing and approving additions and updates to the bryophytes recorded in each vice-county. This results, once every 10 years or so, in the publication of a Census Catalogue that summarises the occurrences of each species by vice-county. Updates to the Census Catalogue are collated and published annually by the Recorders for Mosses and Liverworts respectively. The system has many advantages, which are described in the printed edition of the current Census Catalogue (Hill et al., 2008).

The system makes a distinction between ‘modern’ and ‘old’ records, the cut-off for old records normally being 50 years prior to the year of publication of the current Census Catalogue. Old records are indicated by the use of brackets, and such records are often described as ‘bracketed’.  There is also a category for ‘persisting introductions’ (Blockeel, 2010).

The process for adding an entry to the Census Catalogue or changing its status normally requires the submission of a voucher specimen, and this note describes the current procedure for doing this.

The voucher will normally be a recently collected specimen that is sent to the Recorder for Mosses or Liverworts for verification. If there is sufficient material it is good practice for the collector to retain a duplicate of the voucher. If the voucher is accepted, the record will be added to the New County Record (‘NCR’) list for that year and published in Field Bryology in the following year, and eventually in the subsequent edition of the Census Catalogue.

The voucher then normally goes to the BBS Herbarium (BBSUK), which is stored alongside the main cryptogamic herbarium at the National Museum & Gallery in Cardiff. It is important for those sending in records to be aware that the only information that goes with the voucher to BBSUK is what is written on the packet. The Recorders often receive interesting letters and emails about the specimens in the packets but such correspondence is not normally kept with the voucher! The vouchers may be lodged in other public herbaria at the request of the collector; this information will appear with the record in Field Bryology. It is worth emphasising the value of sets of vouchers in BBSUK and other herbaria from vice-counties throughout Britain and Ireland. As well as direct evidence for individual records, they provide an extremely useful source of specimens, from a wide geographical range, that can be used for future taxonomic revisions. They may also prove to be of value for molecular analysis and perhaps other unforeseen purposes.

Where reliable documentary evidence exists for historic records, these may be accepted at the discretion of the respective Recorder in the absence of a specimen.

New vice-county records are entered by the Recorders into a spreadsheet that is used to compile the list that is published annually in Field Bryology. The records are also sent to the Recording Secretary for incorporation in the BBS database, which is managed by the Biological Records Centre (BRC).  Full grid references are included in the list for Field Bryology. If you think that there are sound reasons of conservation or confidentiality for not publishing the full grid reference of a record, you must make that plain in a covering letter with the voucher. The full grid reference will always go to BRC.

Many recorders have their own personal herbarium with an established system of recording and storing information and specimens. However, for the benefit of those submitting vice-county records for the first time, it seems worthwhile to offer some advice about the preferred options for voucher packets.

It is important that, when submitting vouchers, you send them in as you make them and not save them up to submit as one large batch. The Recorders for Mosses and Liverworts are busy people and have to fit BBS duties around work, families and other commitments and the arrival of a very large batch of vouchers may be disheartening. As a rule of thumb, the number of vouchers in one batch should not exceed 5.

The only information that goes with the voucher to BBSUK is what is written on the packet, and so the packet should be of a reasonable size. The most usual size is an A4 sheet folded approximately into thirds with large flaps at the side. Do not use envelopes, particularly gummed envelopes! The essential information that must be on the packet is: species name, habitat (with altitude if possible), site name or location, as accurate a grid reference as possible (preferably derived from a Global Positioning System (GPS)), vice-county number, date of collection, collector, determiner (if this was not the collector), and collection/herbarium number (if given). An important justification for collecting plants from the wild, some of which are extremely uncommon, is the information that such a collection can provide.

An ideal packet is shown : 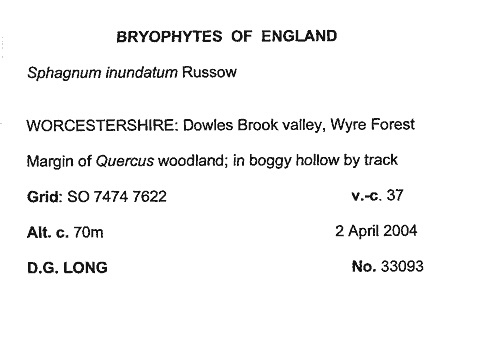 This packet is printed but hand-written packets are fine as long as the writing is clear. A lot of the information on the packet can be unscrambled from poor handwriting but not the locality or the grid reference for which local knowledge is needed; this is the source of most errors in the database. Therefore, use capital letters for place names on hand-written packets.

Where the plant in the packet is very small, it is sensible to put it into a separate ‘mini-packet’; it is a time-consuming task for the Recorders to recapture small plants that have made a bid for freedom. If it is a mixed gathering, please separate out those plants on which you have based your identification and put them in a ‘mini-packet’. For critical species it is important that there is sufficient material on which to base a determination and which is adequate as a voucher that may need to be re-examined in the future. It is very helpful if reproductive structures, which are often required for reliable determinations, are put into a ‘mini-packet’. Please use the BBS Referee system for the more difficult groups of species.

When sending vouchers to Referees or Recorders, please be careful to protect them in appropriate packaging so that damage is minimised in transit. Dry soil has a habit of escaping from loose packages, sometimes dispersing bits and pieces of precious bryophyte that are difficult to retrieve when opened by the recipient.  In the worst cases, the whole specimen can be reduced to dust mixed with vegetative fragments.  Dry soil may also invade mini-packets, and it is a good idea to wrap the main part of the specimen separately if it has a lot of soil attached.