Atlas of British and Irish Bryophytes

HomePublicationsAtlas of British and Irish Bryophytes 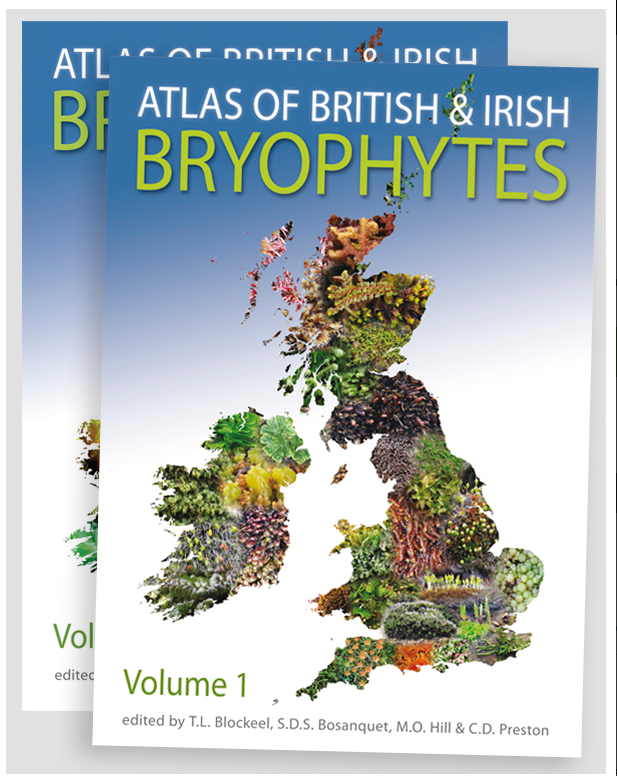 The 2014 Atlas of British and Irish Bryophytes

Buy your copy of the Atlas from Nature Bureau, specialists in environmental and wildlife publishing.

Atlas of British and Irish Bryophytes

The two-volume Atlas, published in 2014, is the latest product of over 50 years recording by British and Irish bryologists, and shows the detailed distribution of 1069 species alongside a summary of their altitudinal range. The accompanying text describes their habitats, and summarises their reproductive biology and wider European and world ranges.

Atlases of birds and flowering plants are produced periodically as a result of a concentrated burst of activity; this is possible as the species are easy to record and there are many recorders to do the job. For bryophytes the strategy is different, and the atlases summarise the result of long periods of continuous recording by a smaller but no less dedicated group of recorders.

This Atlas builds on the earlier BBS Atlas, published in 1991–94. Planning for the current project started in 2003 and for ten years most of the Society’s field meetings were held in areas which were sparsely recorded. As Recording Secretary, Mark Hill processed some 2 million incoming records during this period, to give a database of almost 2.8 million records on which the Atlas is based. Once these were incorporated, he worked on the statistical analysis of the data. Tom Blockeel (mosses) and Sam Bosanquet (liverworts) revised the existing species texts, or wrote new ones, sometimes assisted by other bryological colleagues. At the Biological Records Centre (CEH), Chris Preston checked a series of distribution maps and developed the novel altitude diagrams in collaboration with Steph Rorke.

The nature of BBS recording has changed over the decades, with records increasing in number and made with an increasing degree of precision. In the introductory chapters of the Atlas this history is outlined and the records analysed to show some striking changes in the distribution of species. Many species of bogs, heaths and marshes have declined in lowland but not upland areas. There has been a dramatic increase in many epiphytes in response to the reduction in SO2 pollution, though some species of acidic habitats which thrived in the era of ‘acid rain’ have declined.

The BBS records are available on the NBN Atlas website . There is a continuing need for detailed recording to improve our knowledge of bryophyte distribution, to document the changing flora and to maintain an up-to-date database to underpin conservation assessments. Such recording is linked to the other arm of the BBS recording strategy, the documentation of species occurrence in vice-counties. You can read all about BBS recording in the Recording section of this website.

The Atlas is available to purchase from Nature Bureau (see link above). Also, by kind permission of the publisher and authors, individual species distribution pages will gradually be made available in the new Species Finder pages on this website.

Dynamic maps of bryophytes on the NBN Atlas