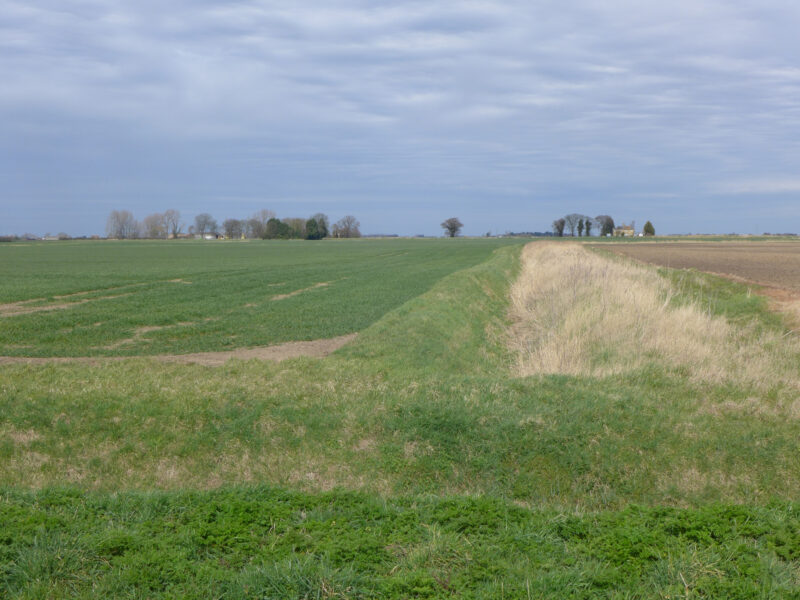 The bryological landscape of Cambridgeshire

Cambridgeshire is a county of two halves. The southern part is not atypical of the planned countryside of the shire counties. The university city of Cambridge lies at its centre, surrounded by frequent villages set in a post-enclosure landscape of large arable fields. It does, however, differ from most of the surrounding counties in the overwhelmingly calcareous nature of the soils. The only significant acidic soils are in the south-west corner of the county, at Gamlingay, where an area on the Woburn Sands has attracted the attention of bryologists for over 300 years. Elsewhere the soils are predominantly formed from underlying substrates of clay (both Jurassic and Cretaceous Clays and the superficial Boulder Clay) or chalk. The county’s ancient woods are concentrated on the clays in the west and the east. The chalk rises to the highest point of the county, 128 m, in the extreme south-east of the county at Castle Camps. Though the chalk, like the clay, is almost entirely ploughed for arable, a few fragments of semi-natural vegetation survive in and around disused chalk pits, and on a few ancient earthworks and trackways.

Northern Cambridgeshire is reclaimed Fenland, a low-lying area which is almost all below 5 m altitude. The solid geology is overlain by soils derived from peats (which is now much modified by shrinkage and oxidation after drainage) and silts. The only exceptions are a few raised areas (‘fen islands’) which have been settled since prehistory and it was on one of these, at Ely, that St Etheldreda founded an Abbey in ᴀᴅ 672.  The current Cathedral, built from 1083 onwards, is visible for miles around. Another striking though low-lying landscape feature is the Ouse Washes, a linear, winter-flooded wetland between two major water courses dug in the 17th century in a major Fenland drainage projects. Otherwise the open expanses of Fenland, though visually attractive, can be bryologically monotonous, and one of the major bryological challenges of the county is to record an appreciable number of species amongst the intensively cultivated arable fields and bordering ditchbanks which comprise the majority of the Fenland landscape.

Although one or two bryophyte records were published in John Ray’s Cambridge Catalogue (1660) and its Appendix (1663), it was not until the 1690s that bryology really got going in the county as a result of the fieldwork of Ray’s friend William Vernon. Vernon was a versatile naturalist who was not only a pioneer bryologist but is also credited with adding three butterflies to the British list. After he disappeared from the scene (we have no record of when, where or how he died) recording continued at intervals during the 18th century. The records of Richard Relhan (Cambridge) and William Skrimshire (Wisbech) in the late 18th and early 19th centuries and John Stevens Henslow and his friends and students in the 1820s and 1830s, though few by modern standards, are particularly valuable in providing an insight into the bryophytes of habitats which were destroyed by agricultural improvement shortly afterwards. This was the last time that some species of acidic wetlands (e.g. Sphagnum tenellum, Scorpidium revolvens), dry, acidic soils (e.g. Pogonatum nanum, Bartramia pomiformis) and calcareous fens (Pressia quadrata) were seen in the county. Unfortunately there is then a major gap in our bryohistory, with few records made between the departure of Henslow to Hitcham, Suffolk, in 1839 and the turn of the century. This is all the more frustrating as these years were the ‘heyday of natural history’ when bryologists were increasingly active in other parts of Britain. A brief revival in the early 20th century ended abruptly with the start of the First World War. 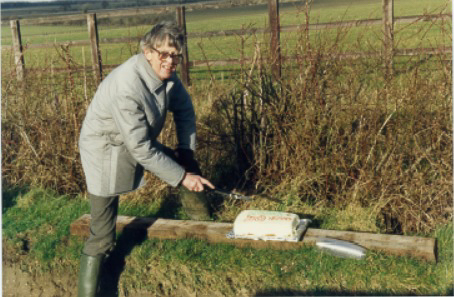 Paul Richards celebrating the 50th anniversary of the bryophyte excursions he started in 1938.

The modern period started with the arrival of a precocious undergraduate, Paul Richards, in Cambridge in 1927. Already the author of a moss flora of Glamorgan, he began to record bryophytes in the county as soon as he arrived, and recruited the help of his fellow undergraduate Eustace Jones after he arrived in 1928. Many records have been made on the winter bryophyte excursions which were started by Richards in 1938. When Richards left Cambridge for Bangor in 1949 he handed his records to Michael Proctor, who, after further recording, wrote the first bryophyte flora of the county (1956). 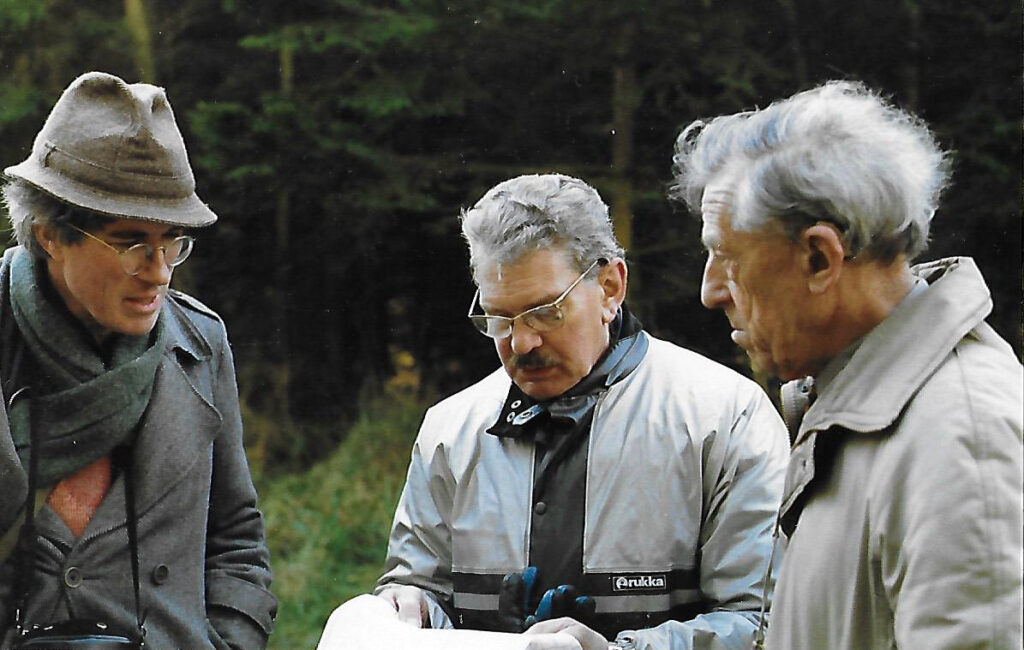 However, it was Harold Whitehouse who led the excursions and co-ordinated records from the county from 1950 until his death in 2000, updating Proctor’s flora with his own account (1964) and checklist (1983). A resurvey of the county was launched by Mark Hill and Chris Preston in 2000 and led to the most recent flora (2019), which summarises 360 years of bryophyte records from the county.

Although recording has been continuous since 1928, it has certainly fluctuated in intensity. There have also been changes over the years in the nature of the sites visited. Bryologists such as Henslow and the young Whitehouse, who were primarily concerned with teaching, have tended to visit the same sites repeatedly, choosing areas close to Cambridge which were known to provide a good range of species. It is only from the 1980s onwards that the emphasis switched to systematic recording. Only one or two favourite churchyards were visited until the 1980s, for example, and it was only after the launch of the flora project in 2000 that a serious attempt was made to record in the built-up areas of towns and villages, and in the ordinary countryside of rural Fenland. It is only since 2000 that the fieldwork of Robin Stevenson has demonstrated that old orchards have become an interesting habitat, as they have been colonised by a range of epiphytes, both expected and unexpected. 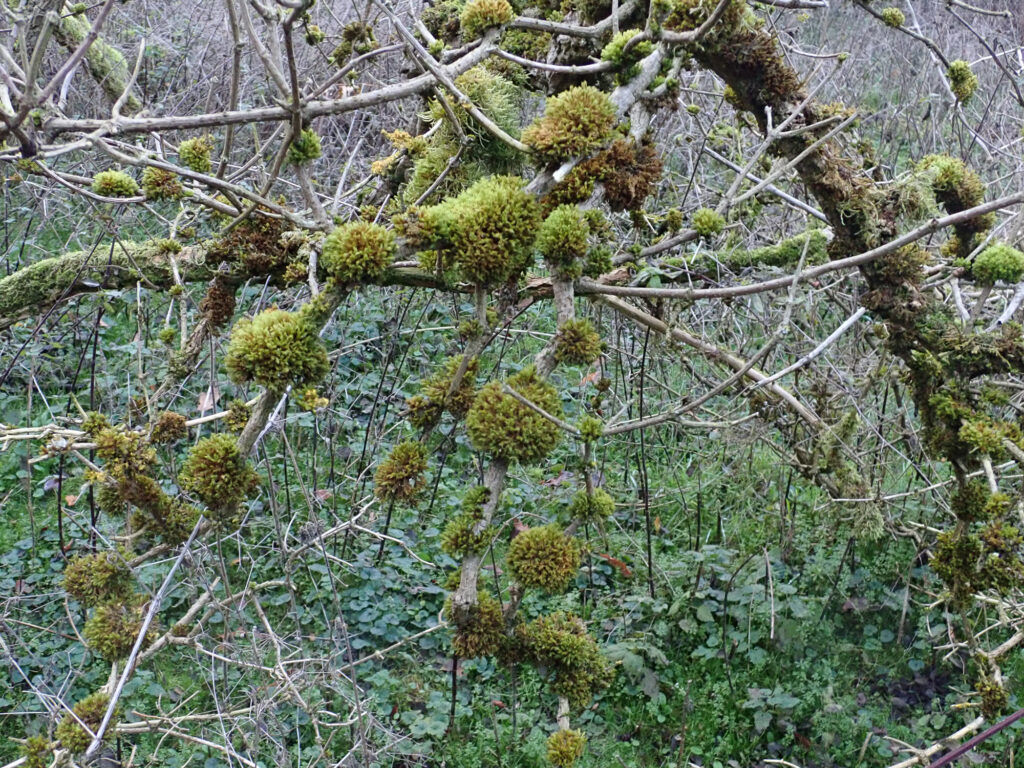 Lewinskya affinis in abundance on elders at Overhall Grove, 2018. The species was not recorded on numerous visits to the site in the 20th century.

Despite the long history of recording in the county, there are many tetrads from which we have no records and the ever-changing nature of the flora means that there are always new species to be found at even the best-known sites. Records from visiting bryologists and new bryological recruits are always welcome.

Some sites of bryological interest

Most of the following species-rich sites are nature reserves. 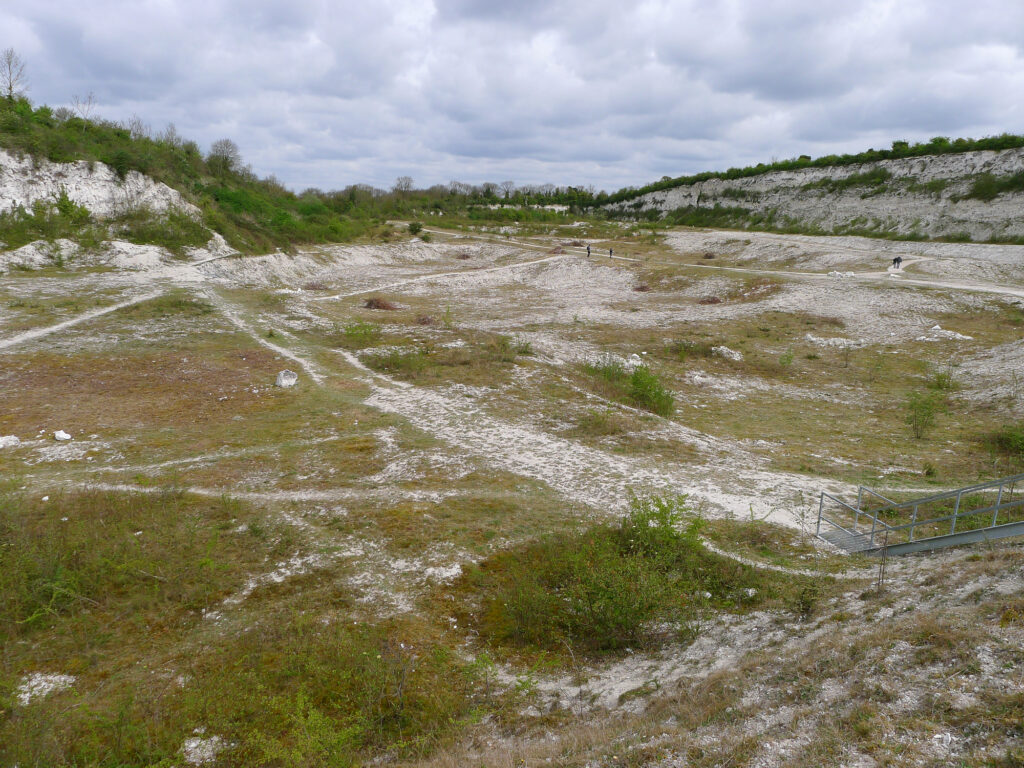 Devil’s Dyke (TL5666 south to TL6558) A linear, post-Roman earthwork, and much the richest chalk grassland site in the county. A public footpath runs along the entire length. 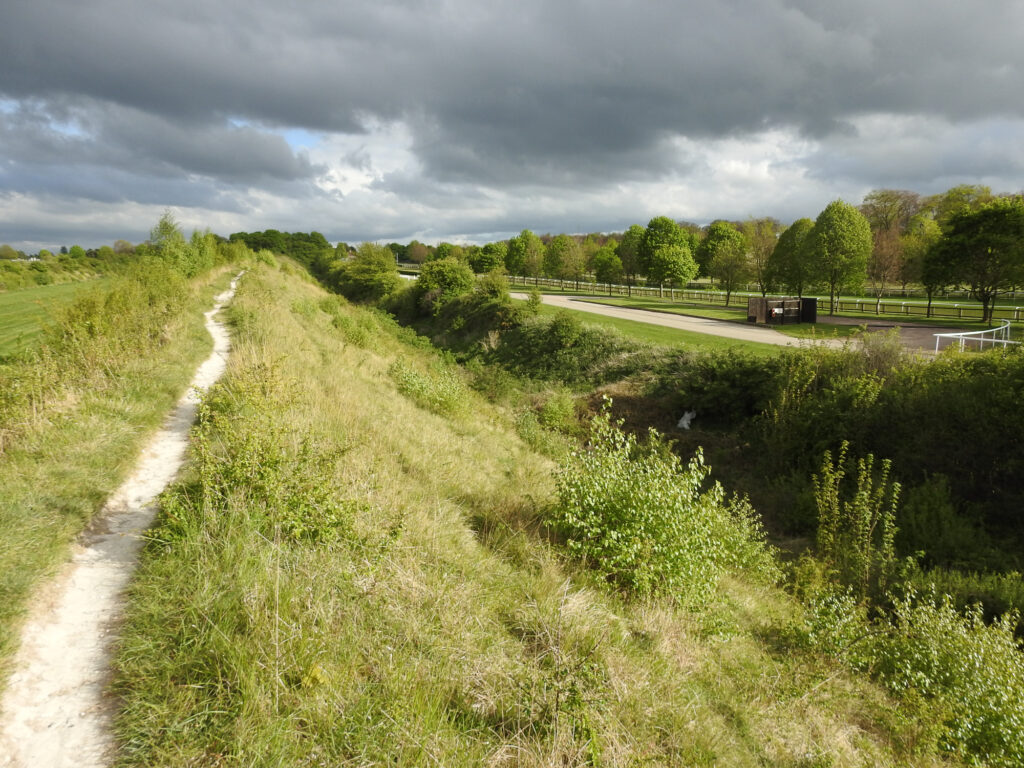 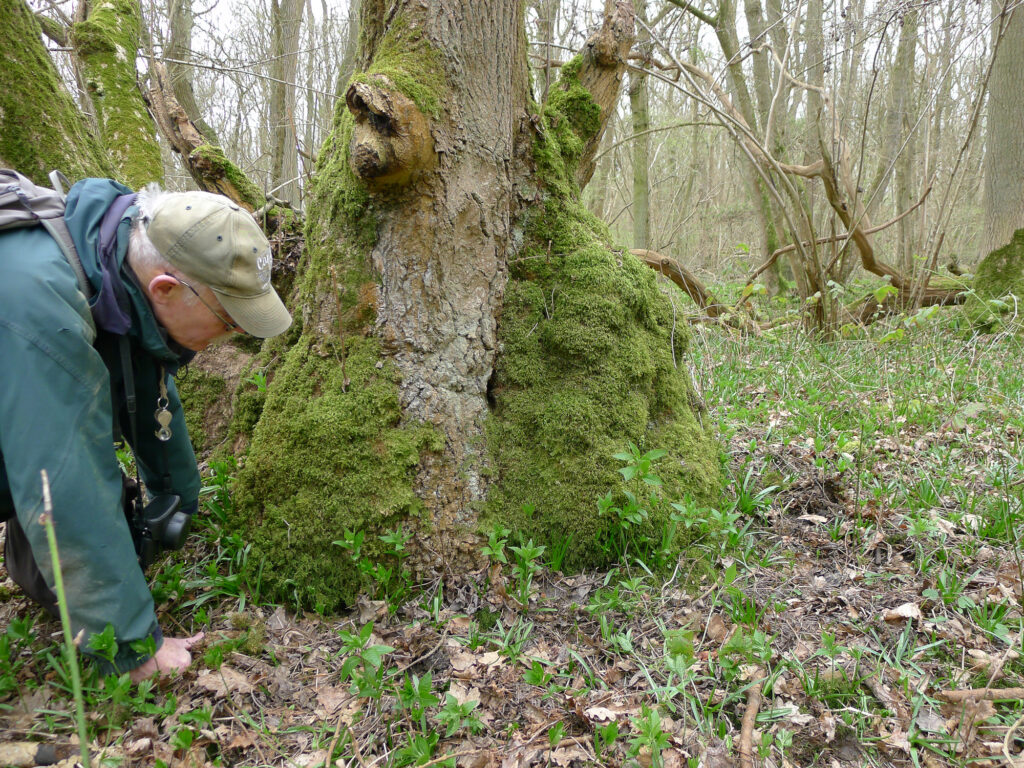 Mark Hill examining the bryophytes at the base of a coppiced ash, Hayley Wood, 2017. 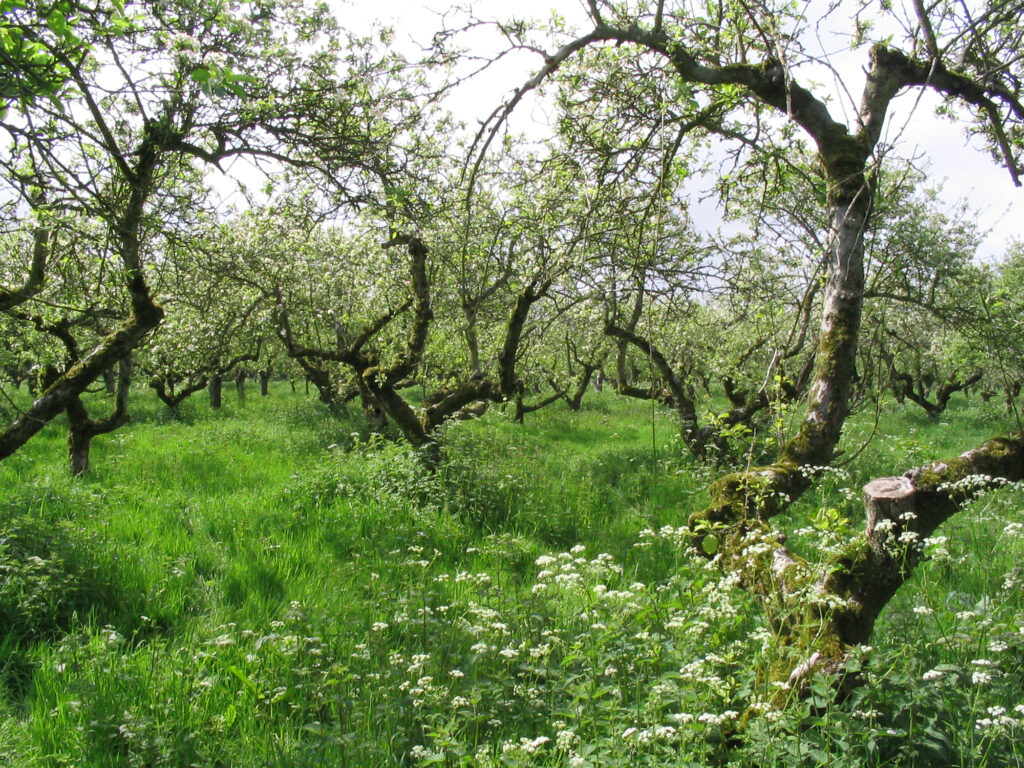 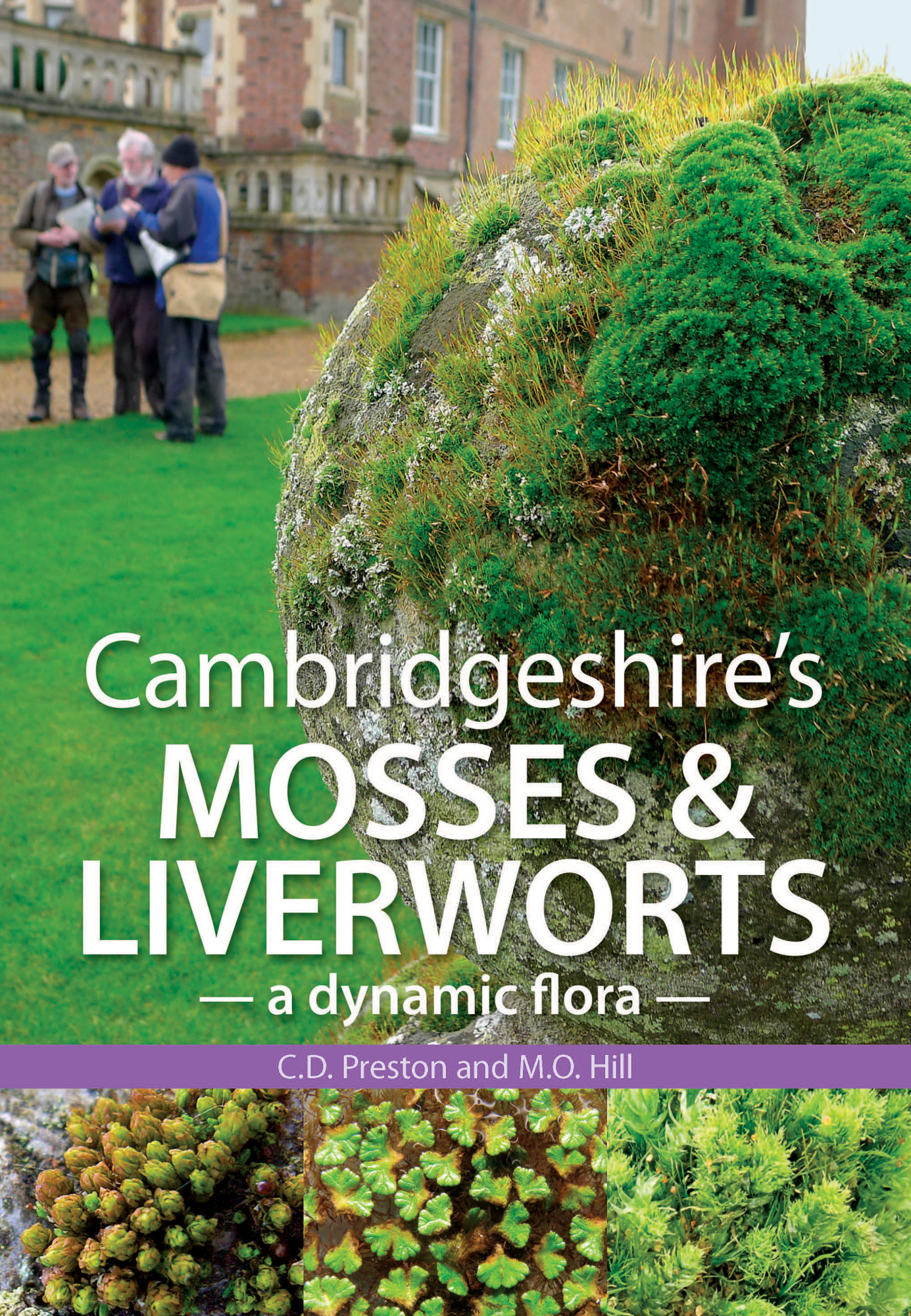 For a detailed account of the county’s bryophytes, see the recent flora:

The older floras and some papers with more detailed treatments of particular aspects of the county’s bryophytes and bryologists are listed below.

Proctor, M.C.F. 1956. A bryophyte flora of Cambridgeshire. Transactions of the British Bryological Society 3: 1–49.